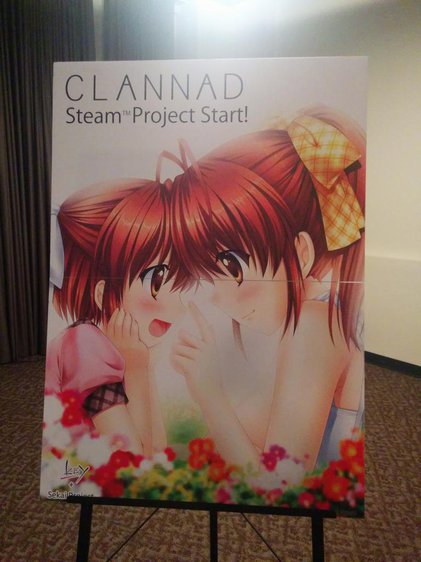 Things are looking up for Kazamatsuri.org! August has been our busiest and most active month! 9 blog posts and a massive influx of new members on the forums; it’s been difficult to keep up!

On the 1st of August we experienced some recursion when we retweeted Sekai project’s tweet of them reblogging forum member Rincchi on tumblr who posted our article about Sekai Project’s survey about Key games! That was a mouthful. But yes, that was an interesting experience, since I wasn’t even aware it was posted on Tumblr to begin with. Do you think a Kazamatsuri.org Tumblr is something we should look into? On that note, on the 4th of August we ended up creating a Google+ Account and Youtube Channel for Kazamatsuri.org! We haven’t used them much yet, but the plan is to use the Youtube channel for any community content we feel like promoting. We also noticed that Key’s Circle of Fifth album has appeared on itunes!

From the 6th of August onward, I’ve been working hard with Uppfinnarn behind the scenes to get Kazamatsuri.org ready for it’s big relaunch. Unfortunately we haven’t gotten it finished yet, but we’re very close - I’m hoping to have the new blog up and running in the next few days - but don’t hold me to that. It should be soon though! A big thank you to all of the Kazamatsuri.org community members who have helped me out by contributing screenshots, quotes and information. You’ll see the fruits of those efforts very soon! I also decided to remove the Translation Corner category from the forums due to lack of interest. If interest resurfaces, I may consider bringing it back, but I’ll leave it alone for now. We also recruited Bizkitdoh as Kazamatsuri.org’s first moderator! He’s been doing a lot of good work since then; I’m very happy with my decision.

On the 7th of August we had the birthday of Yukine Miyazawa from Clannad! On the 9th a GilDeMo cosplayer was found busking in the streets of Baltimore. And on the 11th, we had the big news that VisualArt’s/Key would be joining Sekai Project at Japan Expo! Later in the month I shared details about the products that would be present at Japan Expo. In the end they all sold out very quickly. On the 13th of August, Angel Beats! -Operation Wars- recommenced it’s service, and the community has been stuck playing it again since. Incidentally, this was the same date as my birthday~ On the 15th, forum member Pepe created an English guide for the game, helping introduce many more people to it!

From the 19th there was a bunch of shifting of the Kazamatsuri.org bookclub as Planetarian’s release date was announced, un-announced, and re-announced within the span of a week or so. A bit frustrating, but we got there eventually. I formally announced the Bookclub on the blog earlier today, with the announcement of prizes for participants, so if you want free stuff, please consider joining us! Or just consider joining us anyway because you love Planetarian. The Air bookclub will be coming after! On the 19th, we also celebrated hitting 100 followers on Twitter! Yay for us! On the 22nd of August was the birthday of Mio Nishizono! As you can see here, she seems to have an enormous number of fans on Twitter. As a Mio fan myself, this was very reassuring~ On the 22nd Key posted about their attendance at what I believe was a Weiss Schwarz event, showing off some merchandise there. The 22nd also marked the beginning of Japan Expo, all the way through to the 24th. On the 24th we celebrated the birthday of Chihaya Ohtori from Rewrite, and of course, we received the ground-breaking news at the Sekai Project panel that they plan to bring Clannad Full Voice to Steam! The reaction on Twitter was amazing. I’m still trying to get over the news myself! I’ll be sure to update as soon as more information surfaces. And on the 27th we had the birthday of Toshio Koumura from Clannad, which I unfortunately didn’t acknowledge because it wasn’t on my calendar. I’m sorry Koumura, I won’t forget you next year! On the 28th, Rewrite was released for Playstation Vita in Japan! On the 29th Forum member Takafumi posted an update to his Suginami sprites, and just today we saw an update to Little Busters:! EX’s translation status.

On the forum side of things, there’s been a lot of activity in the Angel Beats! Operation Wars topic, and the H-Scenes in Visual Novels discussion has also been very active. Other notably active topics of the month include Individual routes having bearing on main story: significant or not? and Is There Real Meaning in Visual Novels?. And as I mentioned there’s been heaps of new members coming in from Reddit, Steam and elsewhere, so the Introduction Topic has been very populated.

Whew, it’s crazy how much has been going on this month! There’s been up to a thousand new messages in the Skype chat room each day on top of all the forum posting. Seems like more and more people are beginning to take notice of our humble community! Here’s hoping this continues increasing with the Planetarian Bookclub happening next month! The bookclub will definitely be our focus moving forward. And also, I hope you enjoy the new blog when we hopefully unveil it in a few days time! I’ve been working very hard on it for the last month, and I can’t wait to see what you all think. Until next time, my kagikko!