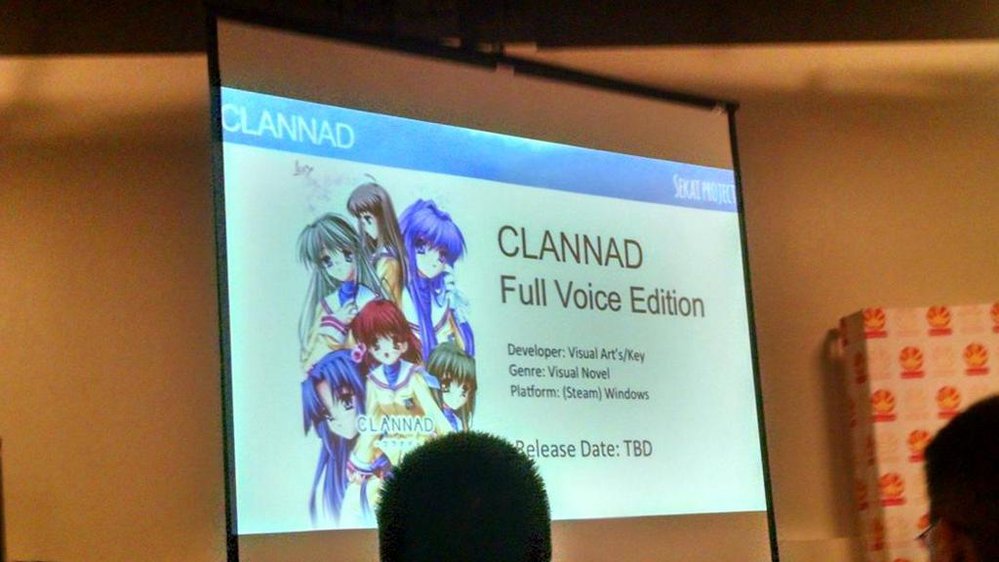 Sekai Project have just announced at their panel at Japan Expo USA 2014 that they plan to bring Clannad Full Voice to Steam for Windows! The release date is TBD.

The livestream of the panel just ended. It was very difficult to hear what was said due to poor audio and video quality, so at the moment we’re relying on the word of people who attended the panel.  Multiple people have mentioned that Sekai Project will be holding a Kickstarter for the game before release. (Source1, Source2) I’m guessing that this means that if the Kickstarter is unable to fund the required amount, the game may not see a release on Steam. But I wouldn’t worry too much about that - I’m pretty confident that a Clannad Kickstarter will be very successful. Still, it may be worth keeping in mind that this doesn’t mean Clannad will absolutely be released - just that it’s very likely to happen eventually.

What can I say? It’s finally happened. This is the news that Key fans from around the world have been waiting to hear for 10 years. This may very well be the single title that changes the face of Visual Novels in the west forever. Maybe I’m overreacting, but I truly believe this to be huge, unprecedented news. And I think the news came a lot sooner than any of us were expecting!

During the presentation, Planetarian was also confirmed to be releasing on the 12th of September. And it was mentioned that it would be priced under $10 USD.

Given the release date, I’ve once again decided to postpone the Air bookclub in favour of the Planetarian bookclub. I apologise for the inconvenience the switching around has caused for everyone, but now that the release date is final, I shouldn’t have any reason to change it around again.  We’ll be spending 2 weeks reading the VN and engaging in discussion in the forums, culminating in a Podcast at the end! You can learn more and express your interest in the topic here!

That’s not all though! Twitter user @JimRaynor_2001  asked about the status of the Angel Beats! Visual Novel, and the response he got was that the scenario would be finished by the end of this month, but will require more time for completion. This is a huge scoop itself! At the very least, it means the project isn’t dead, ahaha.

Credit to @kunaldes for the photo!