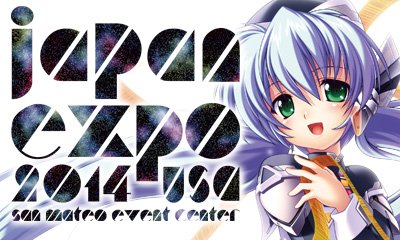 Sekai Project have just announced that VisualArt’s/Key will be joining them as exhibitors for Japan Expo USA 2014! Japan Expo will be taking place in San Mateo, USA from the 22nd to the 24th of August. VisualArt’s/Key also mentioned the news on their site, saying that they’ll be talking more about the Steam release of Planetarian and will also be selling products (merchandise?) there. I’m pretty sure this is the first time Key & Visual Art’s have really come all the way out of Japan to greet their fans in the west, so this is a really exciting development! If you live anywhere nearby, this might be a good chance to meet some of Key’s staff for the very first time! Although, it’s unclear who will be in attendance. Let us know if you’re planning on attending Japan Expo in the discussion topic! This news is still developing, so I may edit this post as more details become clear. Keep an eye on this spot!

UPDATE: one of our members @minatahatsune has pointed out that the recent tweets by @KudoKou_now indicate that he’ll be attending Japan Expo as a representative of VisualArt’s! His real name is Toyoizumi Yoshikuni, and he’s the head of Product Management and Public Relations at VisualArt’s, memorable for being a huge Kud fan who takes his Kud doll to every event. In the absence of any official confirmation, this is the first guest we can be sure will be attending. We’ll update when we hear more!

UPDATE 2: We forgot to mention, but it was stated that VisualArt’s/Key will be bringing a selection of goods from their “VA Koubaibu Syutyouzyo 2014 Summer” running in Akihabara right now for sale at Japan Expo. Also, the Japan Expo website has confirmed that a demo of the Steam release of Planetarian will be shown at the Sekai Project booth,  and a release date for the game will be given during the expo. Also, while not specifically key-related, it was also stated that Sekai Project would be announcing a new project! Lot’s of exciting stuff to look forward to.

You can find out more about Japan Expo here: http://www.japan-expo.com/en/