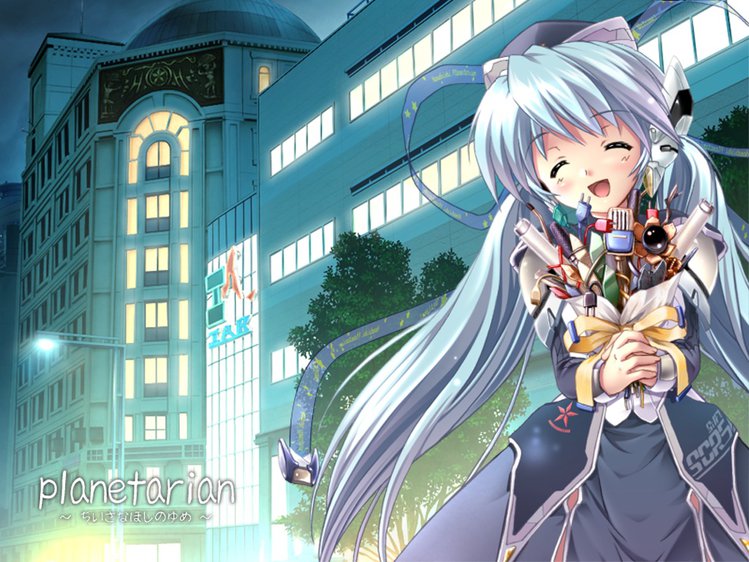 This month has been quite exciting for Key fans! We started with a bang at Anime Expo, with the announcement of Planetarian for Steam by Sekai Project, the very first official localisation of a Key game for PC! (the only other localisation being the recent release of *Planetarian *on iOS). You can watch footage of the announcement here. This was such a huge deal, and it could eventually mean the localisation of other Key games on Steam, expanding Key’s market to a whole new western audience! It’s a very exciting time to be a Key fan! Not only that, but it was also announced that they would be assisting Key15th in delivering the anthology to Key! It’s awesome to see the project resurface, as a lot of our members had a stake in it and were curious about it’s fate. They even gave our site a mention, how awesome! Also, one of our members, Suda21 was actually on foot at Anime Expo promoting our site, and he compiled an album of photos he took from the con here. It was a very exciting time overall!

That weekend we had a community game of Cards Against Humanity, which was heaps of fun for all involved. Later in the month we saw a heap of activity on the forums in the Rewrite General Discussion thread, and the Angel Beats! Heaven’s Door threads; it’s great to see some awesome discussion once in a while. I also ended up adding a bunch of Key characters to Tomodachi life and made a thread about it. I hope to update that later when I get some more out of the game.

For birthdays, on July 20th we had Fuko Ibuki and Akio Furukawa’s birthday! On July 23rd, we had Misuzu Kamio’s birthday, who also got a lot of attention from Japanese fans. A short time after, I got to publish my exclusive interview with Sekai Project’s dovac, which was a big deal for me! There wasn’t a lot, but I hope we could provide people with even a few small hints or details that might not have been known before. We also got an announcement of Tomoyo After Perfect Edition. We saw that Visual Art’s were looking to recruit a designer, and were given a release date for the general sale of the Little Busters! PERFECT Vocal Collection. And on July 26th, we had another birthday with Kotori Kanbe! On the 30th of July, <a href="/little-busters-refrain-dvd-bd-vol-7-le-released/">the 7th and final volume of the <em>Little Busters!: Refrain</em> DVDs and Blu-Rays was released</a>, which included the final 2 episodes of EX and concluded the Little Busters Anime.

And today we also had a bunch of news, with the survey by Sekai Project<a href="/attention-sekai-project-invites-you-to-participate-in-a-survey-regarding-the-localisation-of-key-games-and-other-visual-novels/"> asking for people’s buying preferences, and what Key games they would support through crowdfunding</a>. If you haven’t completed the survey yet, please take the time to do so! I even managed to get it on the frontpage of /r/anime on Reddit, so that’s something! Lastly, <a href="https://twitter.com/KazamatsuriOrg/status/494893370855018496">we were given release dates of the Vita releases of <em>Clannad</em> and <em>Rewrite</em></a>!

It’s been a huge month for Kazamatsuri.org! Lots of news, birthdays, discussion and some new faces too! It seems more people and groups are starting to notice our humble website! Behind the scenes, a lot of work has been going on by myself with the help of some of our community members to produce information pages for each of Key’s works. It’s my hope that these pages help introduce more people to the games many of us already love, and provide helpful information on how to obtain and play said games. Please look forward to them, I hope to have them published in the near future!

Looking into the future, our goal as a community is to continue expanding our family and helping introduce Key’s works to more people. It’s very important that we do all we can to ensure Planetarian sells well on Steam! Hopefully soon we’ll be able to start our long-awaited Key Bookclub, which I hope will become a main focus of our community and help bring everyone together under a common goal. There’s also the Little Busters! Minecraft build project, which is on hold for now, but we hope to deliver on it soon! (finding time is difficult.) Also, there’s a good chance we’ll be doing some renovations to Kazamatsuri.org in the near future, specifically relating to the blog and frontpage of the website. We’re looking into alternatives to Wordpress, as it has caused us quite a bit of trouble in the months we’ve used it so far. I can’t speak too much about it yet, but we’ll let you know as soon as a more solid idea of where we’re going starts to form.

So what are your thoughts on this new style of The Monthly Terra? I thought it would make for more interesting and interactive reading than just listing off a bunch of tweets. Please give me your feedback and suggestions, I’m eager to hear what people think!

Let’s keep up the good work, my friends!