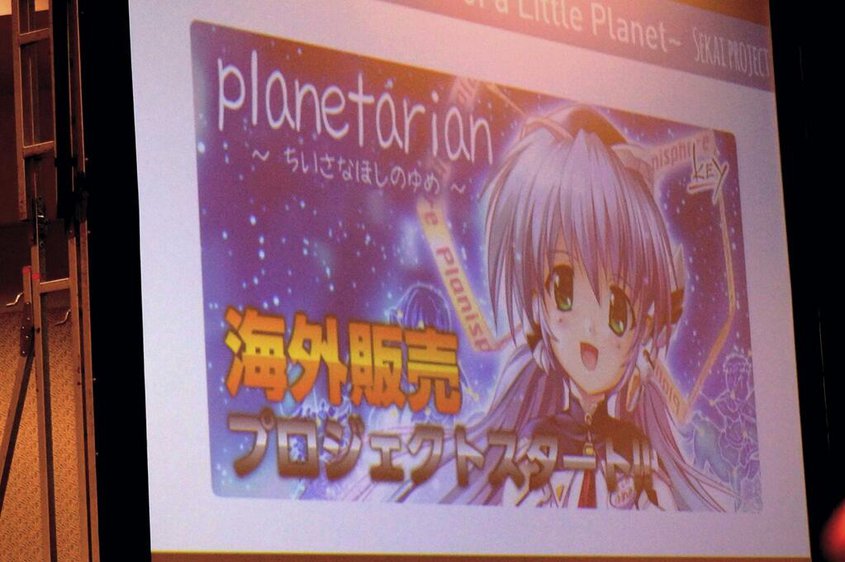 Last night, VisualArts president Baba Takahiro tweeted that there would be a planetarian announcement made at Anime Expo in Los Angeles, which caused a bit of speculation on the forums. Today, it was announced that Visual Novel localisation company Sekai Project would be working with Key in an unprecedented partnership to bring planetarian to Steam! The release is based on the Memorial Edition release, which includes full voice acting for all characters.* *The release will feature an updated English translation and is expected to release in Fall, with Mac and Linux ports to come in the future.

“The partnership between Visual Arts and Sekai Project is one that will have a positive effect on the industry. Though it had been speculated for years that such a partnership was perhaps impossible, I’m happy to say that we’ve made the impossible, possible.” says Sekai Project’s Chrig Ling. Big words, but as anyone who’s followed Key over the years would know, this really is as huge and unprecedented as it sounds.

But that’s not all! Our friends at Key15th.com have just announced that Sekai Project would also be assisting Key15th in delivering the Key15th Anniversary Letter Project to Key! To those of you who were eagerly awaiting more information on the status of the project, this should come as wonderful news. They even gave our community a little mention on their post, which came as a pleasant surprise to me! They also posted a status update on the project a few days earlier, if you were looking for more details. We wish Key15th all the best in delivering the anthology to Key, and we’ll be right here if the project needs any more support from the community. We’re already counting the days to the 20th anniversary!

Needless to say, this is the biggest news we’ve had since Kazamatsuri.org was formed. If planetarian does manage to sell well on Steam, it would be the final push needed to finally have Key’s major titles like Clannad and Little Busters! receive official English localisations, and on Steam no less! But if it fails, this may be the last straw, and Key might just give up on the western market for good.

I’m declaring now that we, as a community, must do everything in our power to prevent that from happening. Everyone, I give you a new mission! Make sure this game sells well. Share the news, tell your friends about the game, and make sure the game reaches as many people as possible! We will be focusing our efforts to that end. If we’re successful, it’ll mean amazing things to come in the future, and Key’s stories will reach a broader demographic than ever thought possible. Let’s work together to make this dream a reality! <a href="http://puu.sh/9W9qz/cd6f40aa7c.jpg"><strong>MISSION START!</strong></a>

If you want to learn more about planetarian, check out this (mostly finished) information page. You can buy it right now for iOS! We also have a discussion thread for the game on the forums (spoiler warning).

UPDATE: Full voice acting confirmed. It’ll be based on the Memorial Edition release.

Credit to @blitzwingjp for the photo used.