Hi everybody, Pepe here again. This article is gonna be the last part of my three-part special coverage of Key 15th Fes. You can read my previous coverages of Akiba Base!! and KSL Live World way to the Angel Beats! -1st-. Now, technically, this event isn’t really part of Key 15th Fes. However, it was held on April 12, 2015, which was the same time as Key 15th Fes. I don’t quite know if this was decided on purpose to coincide with Key 15th Fes., or if it was just a coincidence, but it was pretty interesting to have this event happening simultaneously as the ones organized by Key themselves.

So, you might be asking, “What is Key Points + Key Tactics eXpo?”. Key Points is a bi-annual event, organized by Ayuket, that allows amateur Key fans to showcase and sell their creative works, all of them being generally Key-related. Key Tactics eXpo is a bit of the same thing, however, they focus on the old works by Tactics (Moon, One), Key Sounds Label, and Itaru Hinoue Design Office. They sell a selection of artworks, comics, novels, music CDs, and other miscellanous paraphernalia. Essentially: It’s Comic Market for Key! I also covered the last Key Points, which was featured in an article some time ago.

Key Points 7 was held in the 1st floor exhibition hall of the Ota Ward Industrial Plaza PiO, near Keikyu-Kamata Station in Tokyo. This was a different location from the last Key Points, which was held in Zendetsu Hall, in Chiyoda Ward, Tokyo. I met up with Kami_chan again before going, and we arrived at around 12 pm. The venue wasn’t very hard to find because it was inside a pretty big building. That, and the poster was on a bulletin board right by the entrance. 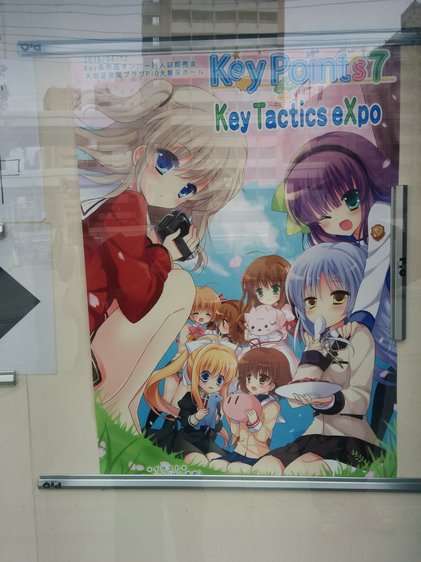 No love for planetarian this time around. ;_;

An interesting thing is that Key Points only took up half of the exhibition hall. The other half had a Kantai Collection fan event of the similar vain going on, but that’s aside the point. Now, in order to enter, you don’t need a ticket; you need a catalog. Not so bad, as it only costs 500 yen. 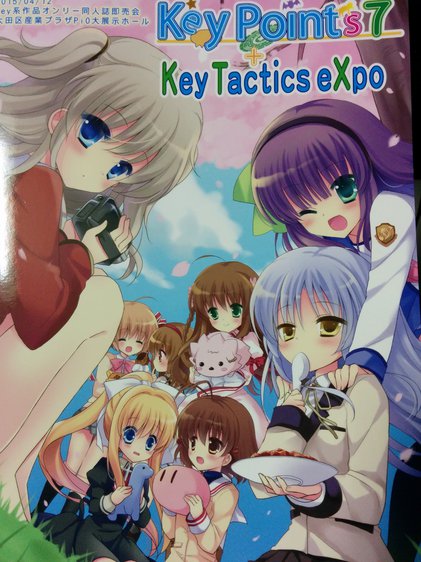 The cover of the catalog is the same as the poster, naturally. 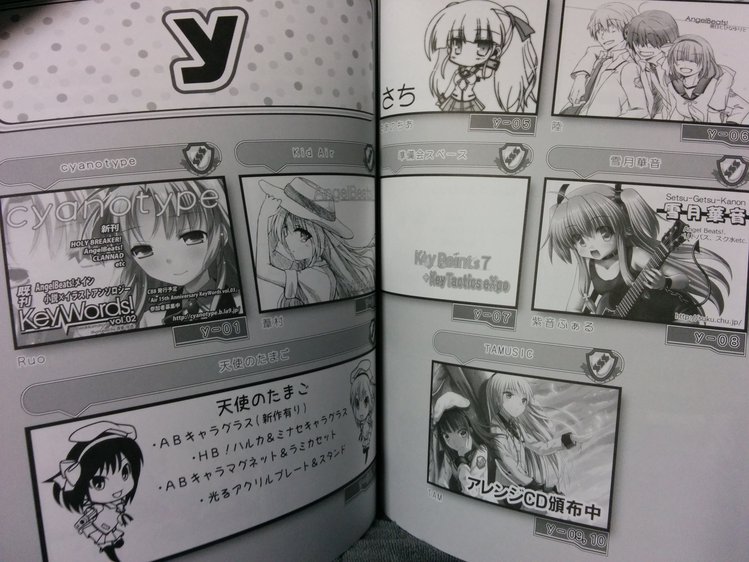 Previews of booths available in the convention.

In what seems to be traditional fashion, booths are arranged by sections labeled ‘k’, ‘e’, and ‘y’. The catalog contains little preview images of the booths available, a list of which is also available on their website. There’s also a rough classification on the catalog as to what booths cater to which series, but that isn’t really strictly enforced, from what I noticed. Anyways, to continue, once inside… 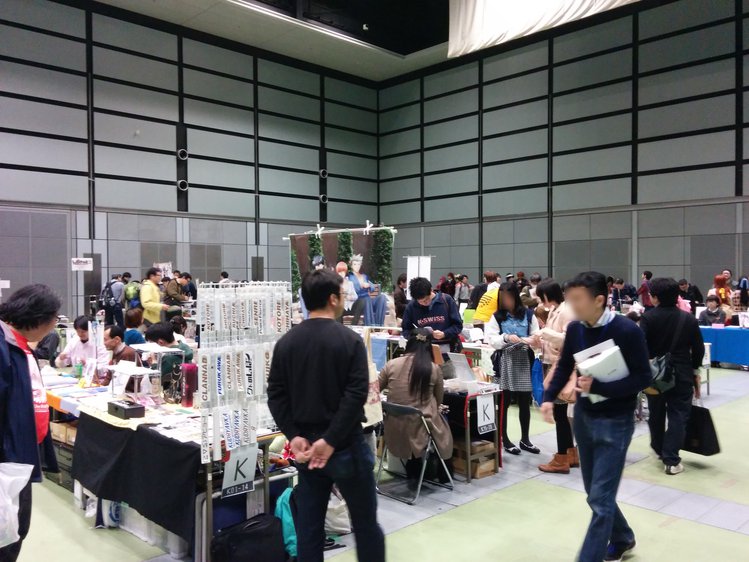 So many Key fans, all in one place. 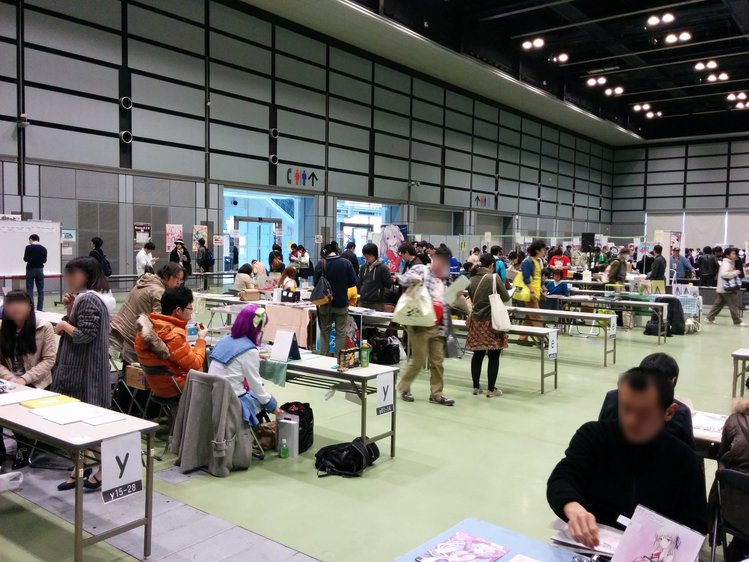 Even the cosplayers man their own booths. 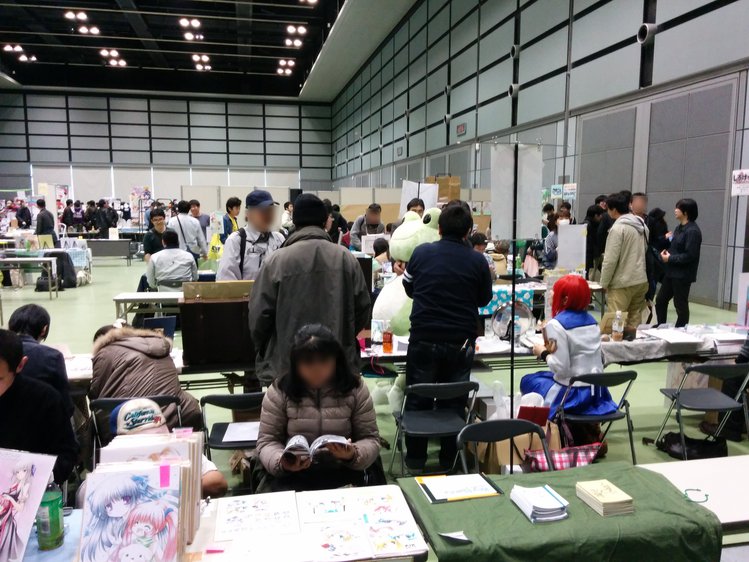 Those shikishis were really good, too.

As I got in, my first goal was to go shopping! I first visited ZEN’s booth, as I had quite a bit to buy there. It was also one of the more popular booths, naturally. 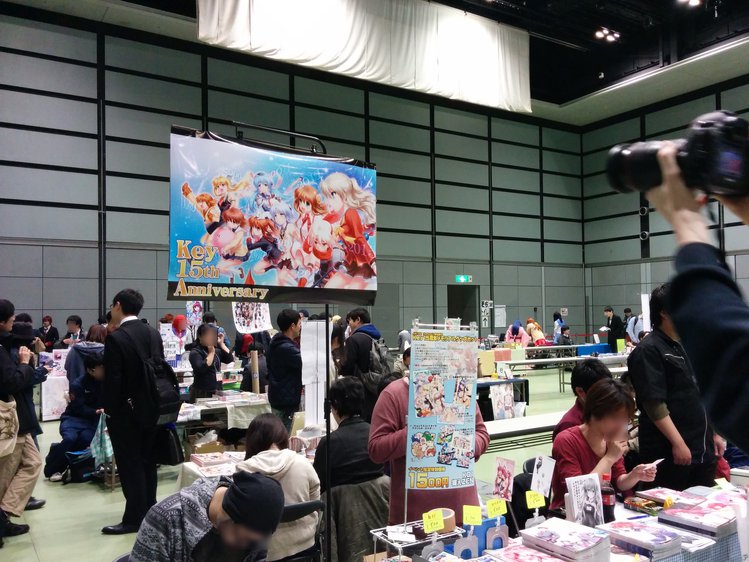 I also wanted to check out another artist, Remotaro, who I am a bit of a fan of. Their circle actually had a project where they wanted to make a book thanking Sasagiri Yuuya for her work with Little Busters! The 4-koma and Little Busters! EX The 4-koma which just recently ended serialization. To get participation of more of the fans, Remotaro opened a campaign on Twitter where fans could send their ‘Thank you’ messages, to be included in the book, and, despite my lack of skill at Japanese, I was able to participate. 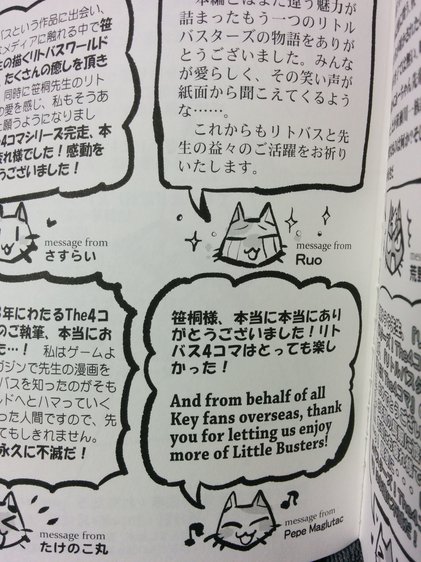 In English, I said “Yuuya-sama, thank you very very much! Little Busters! 4-koma was really fun”.

Once I got down all my planned booths down, we decided to just go around shopping. There were a few interesting booths, some similar as the last Key Points. Too bad I didn’t have that much money left, having spent a lot at Key 15th Fes. Eventually, I did buy a few more stuff, and they were quite worth it. 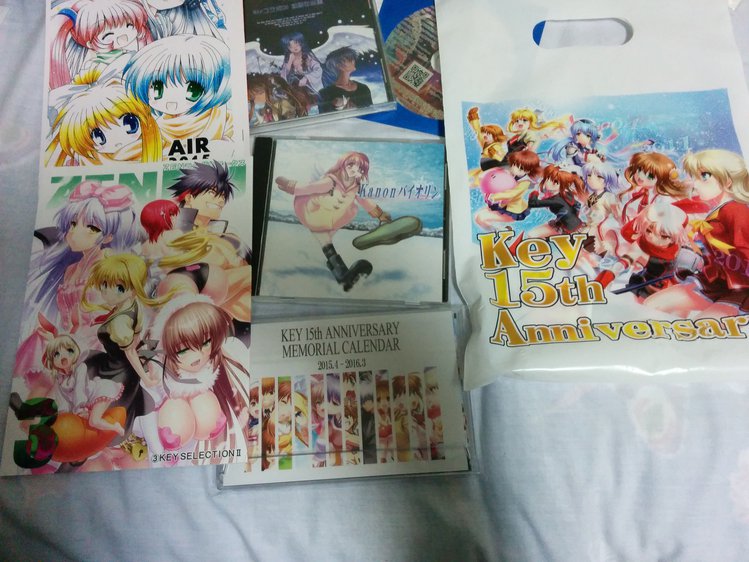 Goods Set from ZEN, CDs from TAMusic, and a booklet from Snowtown.

After buying a bunch more stuff, we just hung around, observing the other booths. It was interesting how a lot of people were wearing the T-Shirts from Key 15th Fes., but otherwise, it was a very quiet event, and very similar to last Key Points in terms of attendance. Also like last event, there was a section where you could check out samples of the latest releases of circles. Unfortunately, I wasn’t able to take a picture. There was an interesting booth this time around, though, where fans could post their own drawings for the event! 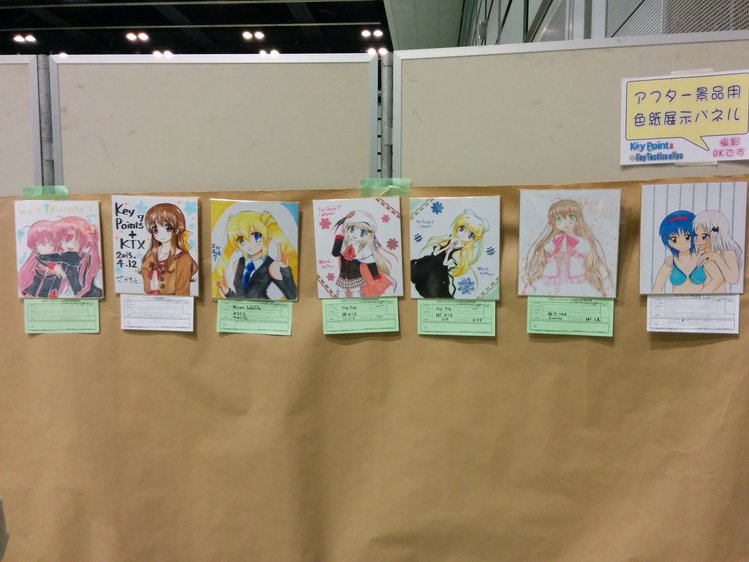 Too bad I’m not skilled enough to draw anything.

After being fairly satisfied with the booths, we went on to the next part of the event: The Cosplay! The cosplayers had a set ‘cosplay area’ where they could leave their things, pose for photographers, and just basically hang out. Quite a fun bunch of cosplayers, and one thing I absolutely love about Key Points is how the cosplayers all interact with each other. Here’s a few pictures I took of the cosplayers. 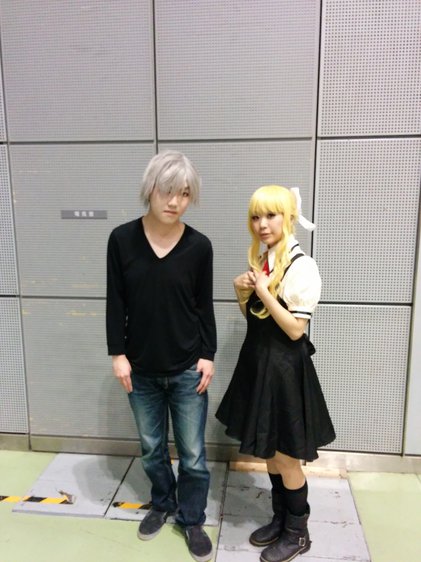 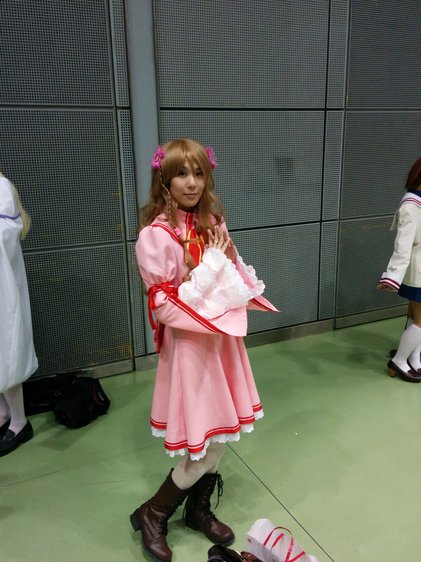 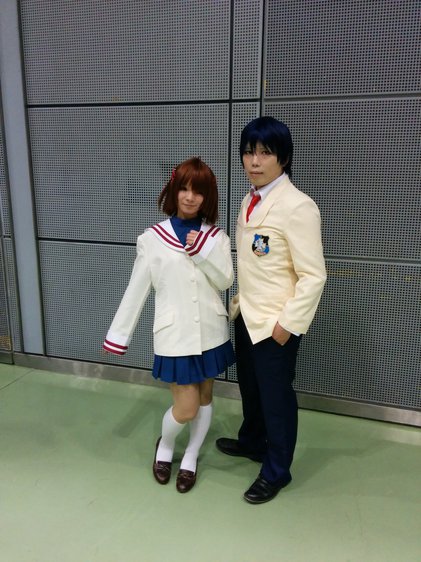 You don’t see much CLANNAD cosplayers nowadays, sadly. They were really good, too. 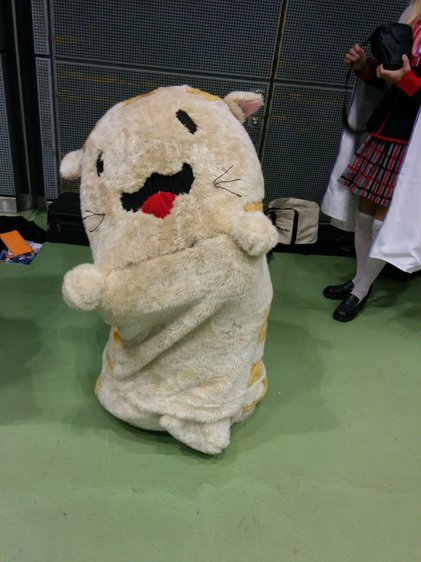 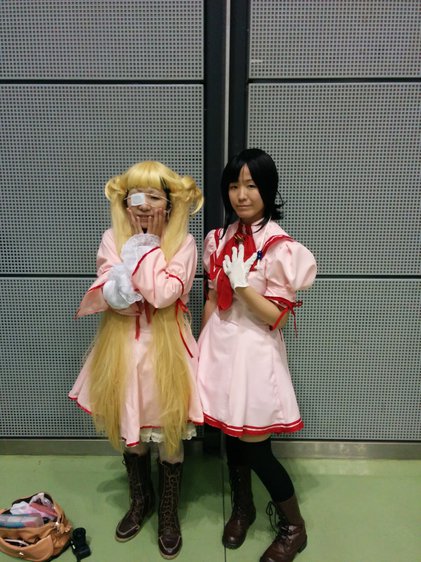 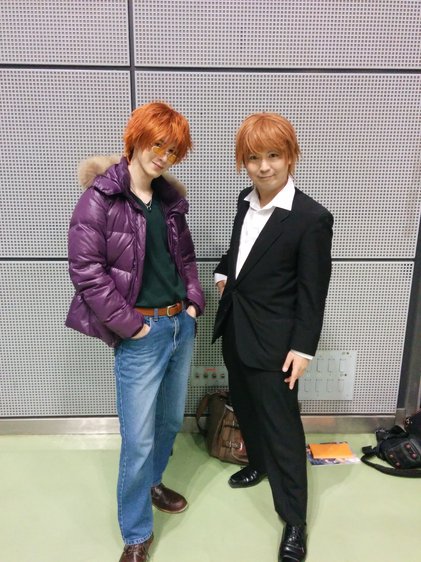 After hanging around the cosplay area, I met up again with Clow and MiyazawaLulu, and they were in cosplay again, with Clow as Kyousuke, and Lulu as Saya. We were even introduced to one of their friends, cosplaying as Riki. 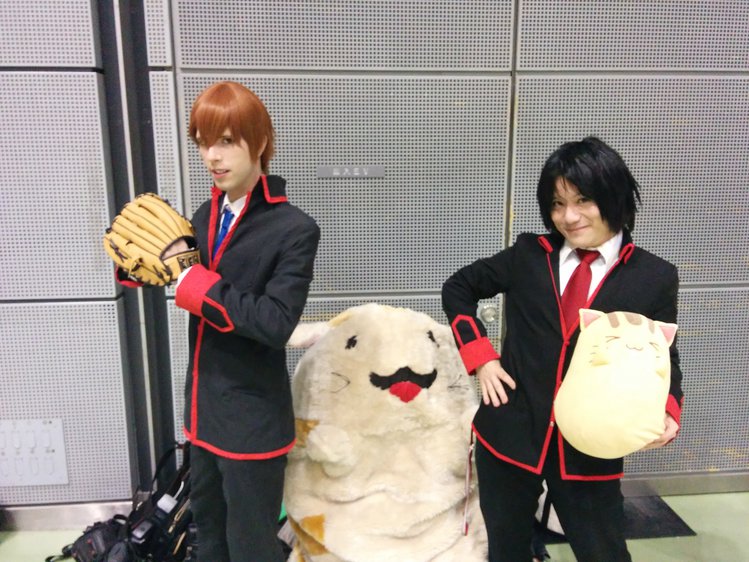 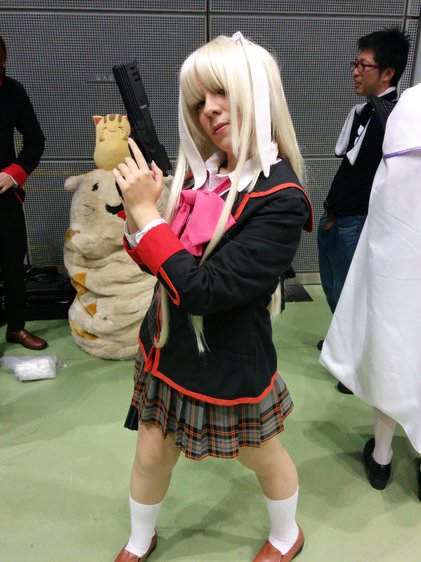 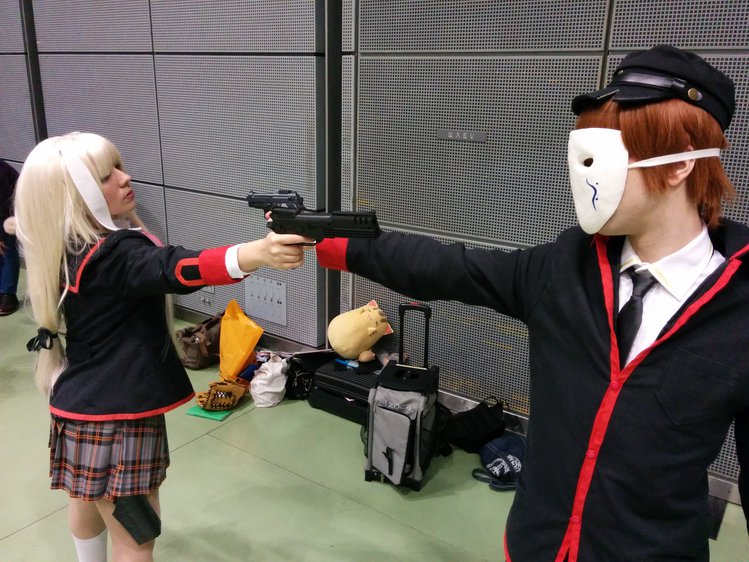 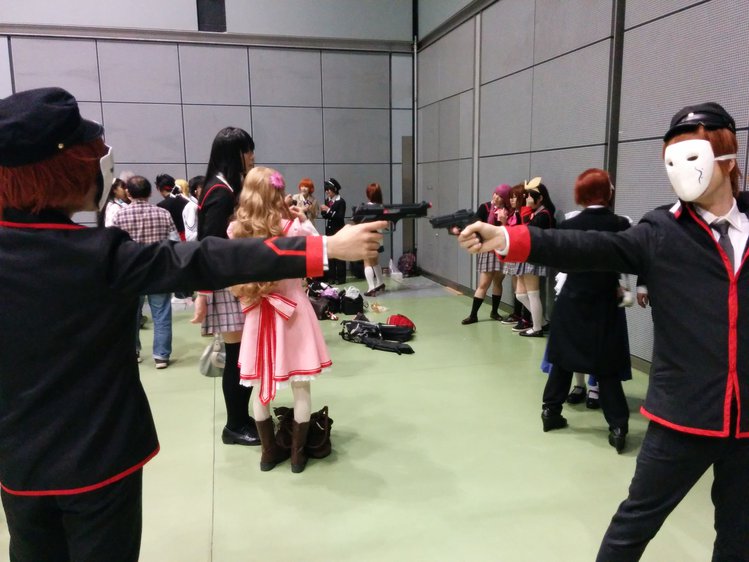 Final showdown between Shun and Shun.

After hanging out and talking a bit, we decided to leave early, as we still planned to go off to Akiba Base!!. This was before the closing, so I wasn’t able to catch the final group picture of all the cosplayers. Thankfully, Twitter pulls through. There were some cosplayers that I didn’t catch, though. 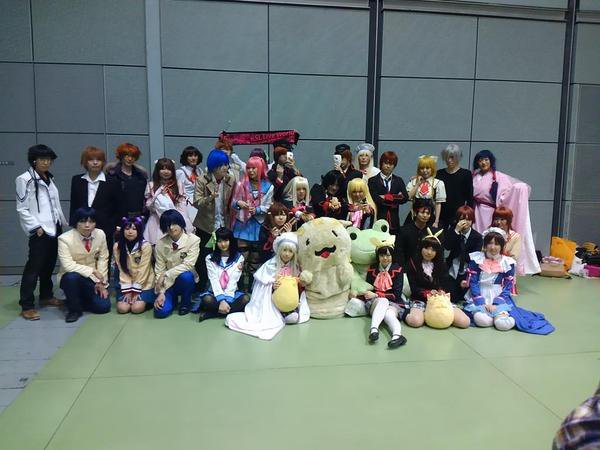 All-in-all, it was a really fun event, and it’s such a great feeling to see all these Key fans in one place, making art, cosplaying, and all-around enjoying themselves, even conversing with each other. It’s something you may not expect if you’ve only been to big-name cons like Comiket where it’s all business, and people are rushing from one booth to another. It was a better experience for me, as well! When I went to Key Points 6 back in October, I could barely speak any Japanese. However, this time around, I could actually communicate. I was able to speak with some of the cosplayers, and comment on some of the artworks at the booths, too. So yeah, if you’re a Key fan, and ever find yourself in Japan during Key Points (held usually in April and October), I would highly recommend just visiting and hanging out!

That’s all for my special coverages, and I hope my coverage of the events was able to give you a glimpse into the kind of events that Key fans get to experience in Japan. I’m looking forward to the next Key Points, and I’m hoping some of our readers here will be able to experience this event firsthand one day!

Thanks again to the people I met there (Kami_chan, Clow, and MiyazawaLulu), and also credits to @foc_jp on Twitter for the group cosplay picture!