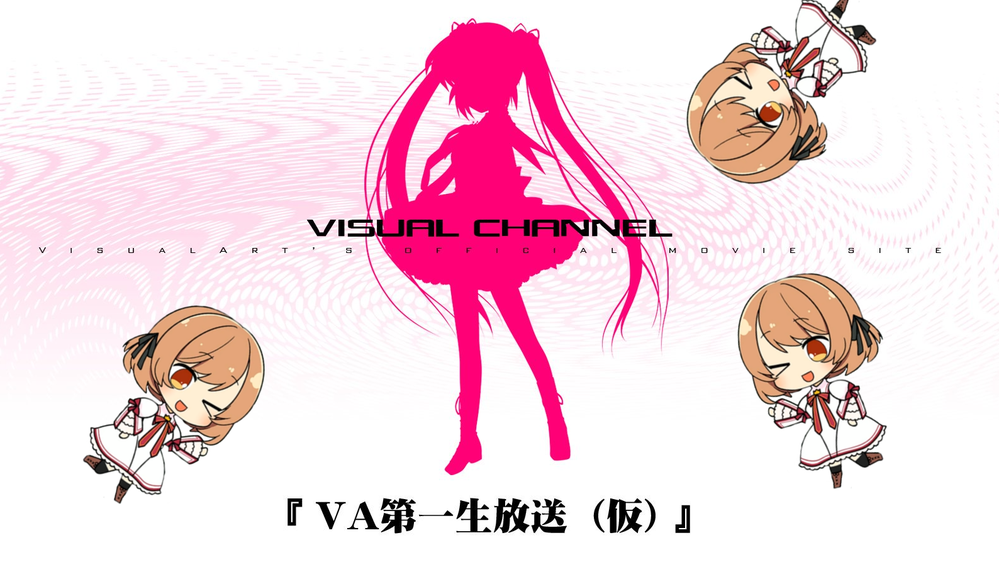 Over the last few months or so, it’s possible you’ve seen us mentioning “VisualArt’s livestreams” on social media, so I’d like to take the opportunity to explain what that’s about. In short, there is the main stream from the VA sales department, and they are currently in the middle of starting up other regular programs. All regular streams are hosted on Niconico and the Official VA Youtube channel. While they’re watchable globally, there are no subtitles or translations, so keep that in mind. News about streams also come from the sales dept. Twitter.

The center pillar is the extremely confusingly named ＶＡ第一生放送（仮）The First VA Livestream (temporary) led by ShibaP and D. Sakamoto of the VisualArts sales dept. This program is a general outlet for news and promotion. It airs at 6am (UTC) Thursdays. You can find The First VA Livestream (temporary) #2-7 on Youtube. Some notable announcements from this stream include the KSL release party 2017, the plans for crowd funding the planetarian analog album, and this preview of a Summer Pockets promo art. They also played Beyblade versus Kai (because why not?) and announced the other kinds of livestreams they were planning.

The first of these programs to air was the Rewrite Ignis Memoria Station promoting the Rewrite social game. Hosting the program we have the game’s director, Takeuchi Gun, as well as the voice actor of Shimako and Inoue Akira, Watanabe Yoshimi. The program will focus on promoting upcoming events and also give tips for the game. The program seems to be on a bi-weekly schedule airing on every other Wednesday at 7am (UTC). The first episode, which aired on June 21, addressed the new Duel Arena game mode, and we also got to preview two images from the swimsuit event that started June 30. Finally, they have a segment called “Inoue no Hitorigoto"Inoue’s Monologue which consists of Watanabe reading specific lines in-character. For the first episode she read lines from Inoue’s birthday event back in March, but viewers are also asked to suggest lines for future episodes on Twitter using the hashtag #井上晶のひとりごと.

The last to air as of the time of writing is a live drawing series simply called VAライブドローイング「今月のお絵かき」VA Live Drawing ‘This Month’s Drawing’. In the first episode we have a host, Fujii Tomotaka, from VA and three newer, up-and-coming illustrators. The format they had is that one of the illustrators was drawing and sharing their screen while the others were talking about various things. Who does the drawing will change every episode, and we don’t have any information of exactly when the next episode will air. The illustrators featured in the first episode were Himemiya Nina (Twitter), Fumuyun (Twitter), and Maroya Kayo (Twitter) with Himemiya doing the live drawing. The subject of the first episode was Kud from Little Busters! to commemorate her birthday earlier this month.

Those are the only ones I can report on, but it was revealed others were in the works; there are just not enough details as of now. Hopefully this makes how VA are going about their promotional streams a bit clearer. It’s likely we will be using them as news sources a lot more in the future after all. Personally, I’d love Inoue’s Monologue to get lots of suggestions, so if you have anything I can help translate it.