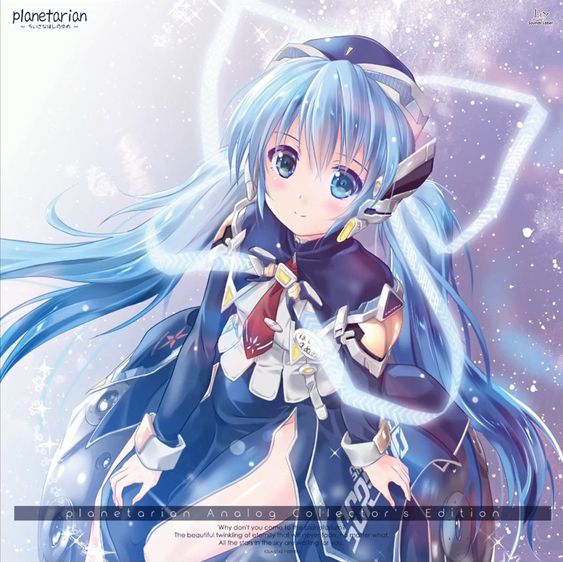 VisualArts has now launched their crowdfunding campaign for the planetarian Analog Collector’s Edition, an analog record with the main vocal tracks from the planetarian novel and anime. You can follow the campaign over at CAMP FIRE where it will be going until 25th of June 23:59 JST. The special, limited rewards sold out in a matter of minutes, and pledges seem to continue at a healthy rate. The campaign’s goal is 1 million yen; the page explains that no stretch goals beyond that have been planned, but if they come up with any those will apply to all levels of pledges. This project was initially revealed by Orito Shinji on a VisualArts live stream on the 18th of May. It had previously been suggested on Twitter by Togashi Magome, and thanks to the attention it got they started planning this crowdfund.

As for the product itself, the record is planned to be a 12 inch LP disc illustrated by Komatsu E-ji and featuring the tracks listed below. The estimated time of delivery is September 2017 with shipping being free within Japan. You can also contact them about shipping to different countries. They updated the page saying that Camp Fire unfortunately doesn’t allow for foreign transactions.

Below are a list of the available pledges, but all limited ones are currently out of stock leaving just the standard ones which are unlimited.

The Air and Little Busters! versions of these records are rather exclusive pieces of merchandise, and this one is probably not going to be an exception. It definitely wouldn’t be a loss to get your hands on just the regular record. Furthermore, if you’re interested in the previous analog records, it just so happens that the Little Busters! Bookclub will be providing a chance to obtain a copy of Little Busters Analogue Collector’s Edition in the near future.