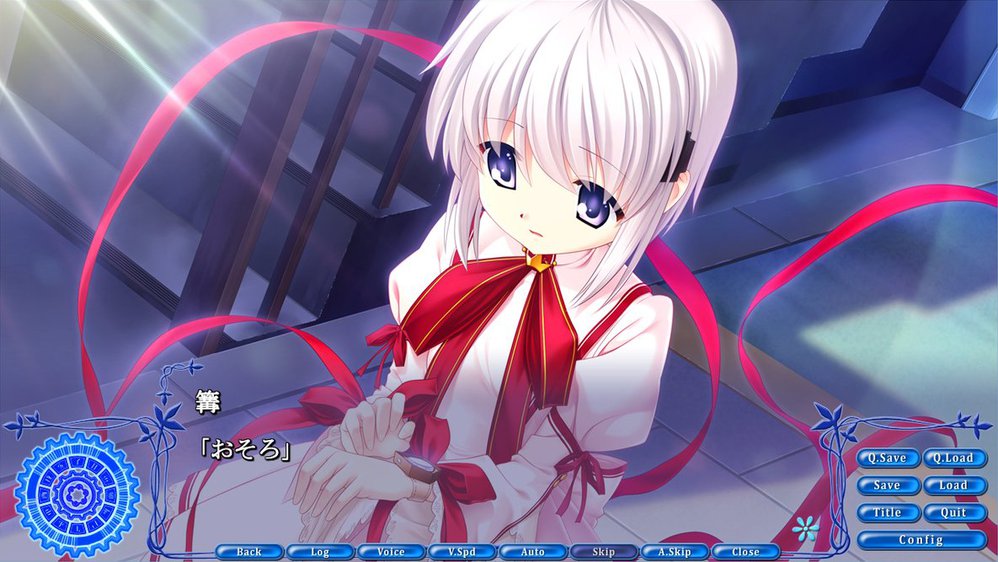 With the recent release of the Rewrite Anime’s Final Blu-Ray comes the bonus mini-game Cradles Tale, released as an epilogue to the Rewrite story, particularly picking up where the anime ended. There doesn’t seem to be any efforts to see it translated into English, but thankfully forumer Tsukishiro has generously provided us with a complete plot summary in English, which we’ve provided for you below! Thanks Tsukishiro for your hard work, we really appreciate it. If you’d like to check it out for yourself, you can purchase the Blu-Ray or DVD from CDJapan. Major plot spoilers below.

Pochi has returned to Earth using the lifeforce of his five masters. He also brought Kagari back, though initially by the name “Chan” because she introduced herself in English as “Chan Kagari.” She hardly speaks at first due to her choosing the English language pack instead of Japanese by mistake due to how long her “isolation treatment” was.

They live at Chihaya’s mansion at first, which serves as the dormitory for the other girls (who are mainly at school), and Chihaya later relocates them to a villa so their existence can be kept secret. Chihaya tries to instruct Pochi on how to be a proper butler, but doesn’t find much success. Even after memorizing a book on butler etiquette, Pochi finds it more efficient to grab a bottle of green tea from the fridge rather than brew it himself when asked for tea. Believing himself to be destined for great things, he considers himself and Kagari to be two SSR Units being used by a player that can’t appreciate them.

For his own meals, Pochi eats the weeds and plants that Kagari prepares. Plants contain a bit of lifeforce themselves so it’s more than enough for them. He wonders how he knows so much about lifeforce and humanity despite being a tree for as long as he can remember.

As Pochi becomes disgruntled by his butler training, Kagari decides to give him a hand, assuring him that she can do anything a human can. Unfortunately, while trying to make miso soup, she found that her ribbons couldn’t even cut through tofu and blamed it on a lack of lifeforce. At this point, Pochi believes that everything Kagari says must be correct and Chihaya is worried about having a couple of idiots as servants. The two eventually manage to make the soup using a bit of Chihaya’s lifeforce (the amount being roughly equivalent to the number of calories in miso soup). Despite it being too sour, Pochi congratulated Kagari for her brilliant achievement.

Pochi and Kagari go out for a walk around town as a pretense to search for troubled people to help with their power. They find that everything is remarkably peaceful, which Pochi finds strange since he had memories of a war being fought years ago. Furthermore, everyone they offered help to ran away screaming when asked for their lifeforce. Kagari suggests that Pochi lacks charisma and needs to change his strategy. The two continue people-watching to gather clues on how to be charismatic.

When passing by a store, Kagari sees a group of students with different colors of skin and asks about the ones in pink. Pochi explains that the pink is from a school uniform and proceeds to explain the concept of “clothes” to her. Seeing her interest, Pochi promises to buy a uniform for Kagari once he gets enough money, despite its exorbitantly high cost and his lack of knowledge on the value of money.

While passing through an alley, the two are confronted by hoodlums (actually Safety Patrol, which included Winter Fang) that warn them about the dangers of walking through places like this with a lady. Misinterpreting their intent, Pochi calls them “normal rares” and threatens them until Yoshino the honors student appears.

Following an exchange in which Yoshino explains how he detests quarrels and what he had been doing while the Earth was in decline (taking care of his bedridden mom), he calls his pack (of common rares) to intimidate Pochi. Pochi promptly apologizes, to their surprise. Recognizing that Yoshino was a man possessing great charisma (and a 7-star rarity), asks that he be his teacher. He then proceeds to explain his circumstances to him, including how he could grant nearly any wish in exchange for lifeforce and could even travel through space.

Skeptical, Yoshino sarcastically asks who would want to go into space, to which one of his gang members said that he’d always wanted to see outer space and wouldn’t mind giving a year of his life to visit the Moon. Pochi tells him that he only needs 30 minutes of lifeforce for one person and promptly takes him there. One exhilarating trip later, Yoshino is convinced and gives some advice to the two, such as changing “lifeforce” to something less devilish-sounding since taking it doesn’t necessarily shorten a person’s lifespan. He also suggested that the two make efforts to know humans better and wishes them luck, since he feels that their power was too great for someone like him, who was too busy kicking up a storm in the world of honor students.

Before leaving, Pochi demands payment for the Moon trip and uses it to buy the uniform for Kagari, who is overjoyed and notes that the uniform feels nostalgic. Rumors spread and soon, Pochi was taking people to the Moon for 5,600 Yen per trip. Though by this point, he didn’t see the need for money.

The two contemplate how much time they could afford to waste before accomplishing their undefined mission, but decide that there’s no rush since the Earth had plenty of lifeforce for several more years at the least. Kagari states that she doesn’t understand the concept of time, so Pochi takes her to buy a watch.

Pochi buys two matching cuckoo watches and the two of them warmly reflect on the idea of passing time together just like any other human.

As they leave, they find a chronically-ill man collapsed on the street. Pochi uses his power to instantly transport him and his lady companion to the hospital for less than 5 minutes of lifespan. Seeing how grateful the lady was to him, Pochi had a realization on what his purpose should be.

He teleports himself and Kagari back to the mansion, where he announces that he’s taking a break from his butler job. He tells Chihaya that the two of them will set off on a journey to become closer with humans, and shows Chihaya the money they earned on their taxi business for use as travel expenses. When she asks just what the two of them are, Pochi simply replies that they are tools for humanity to use to overcome hardships and assures her that they would come back and visit.

Taking only the barest of necessities, Pochi and Kagari set out on their journey without a destination. They knew the time would come when people would understand - that through using lifeforce, anything was possible.

Even traveling beyond the stars and back again. And it was their job to teach them that.

Kagari smiles. A smile indistinguishable from that of a human.

Gazing at the passing clouds, the two walk hand-in-hand.