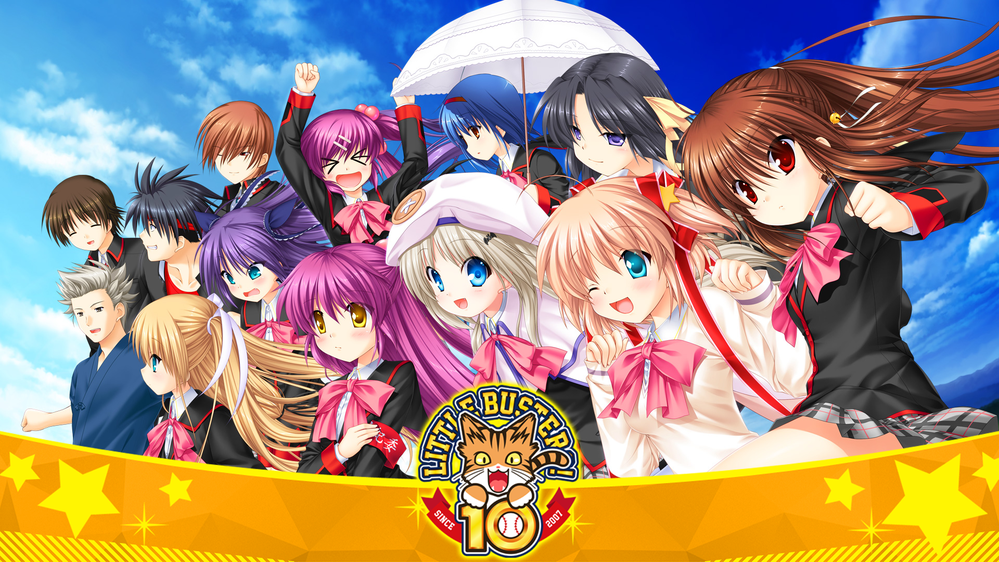 As part of VisualArt’s weekly livestream, yesterday they revealed a special project in celebration of the Little Busters! 10th Anniversary! That’s right, Little Busters! came out 10 years ago and, no matter how old that makes you feel, they are making all of us remember the good times we’ve had with the whole Little Busters! crew. In light of that, they’ve set up 5 “missions” for us fans to participate in, and make this anniversary a memorable one. VisualArt’s have even published a website for the anniversary, highlighting all of the missions with lots of details. Here’s a breakdown of the information!

The first mission, and probably the one catching the most attention, is the announcement of their plans for crowdfunding the Kud Wafter anime (or, in their own words, a Kudfunding)! We’ve been well aware of the possibility of a Kud Wafter anime happening for a long time now, and now we have all the details for this project. Firstly, J.C. Staff has been confirmed as the animation studio for this project, with Yoshiki Yamakawa returning as the director of the project. They’ve also announced in the stream that it’ll be featuring a brand-new Kud-centered storyline! That means that it may not be following the same plot as the VN with the same title, for better or for worse. They’ve even shown a few rough sketches of the storyboard, and I’m sure you’ll recognize some of the characters seen below.

The crowdfunding is scheduled to start on July 19, 2017, through local crowdfunding site, Campfire (similar to what they used for the planetarian analog edition crowdfunding ). As one of the highest backing rewards, they plan to have 10 limited edition, specially drawn shikishi by Na-ga himself. Unfortunately, because Campfire is a Japanese-only crowdfunding site, they currently have no way of supporting foreign payments. But hey, if you do want to support this project in any way possible, let us know in the discussion below and we may be able to help you out!

Onto the second mission! Nothing too fancy, really. Just a twitter campaign where you could win a specially-signed Shikishi from a few of the original team members that worked on Little Busters!. This may or may not include people like Jun Maeda, Na-Ga, Shinji Orito, Yuto Tonokawa, Chika Shirokiri, PMMK, Magome Togoshi, and many more! No details announced yet, but you can expect it to start next week, on July 5, 2017.
Edit: We now have details on how the giveaway will be conducted. Key will post a tweet with their official account on July 5. By retweeting that tweet and following the account, you’ll be entered into the giveaway! We’ll post the tweet here whenever possible. Here’s the tweet!

The third mission is even cooler! VisualArt’s are hosting a campaign inviting Little Busters! fans everywhere to create something in celebration of the Little Busters! 10th anniversary and post it on Twitter with the hashtag #LB10th by the 27th of July. From these, 50 will be selected by VA staff to receive a 10th anniversary baseball signed by the VA staff. Unfortunately, they aren’t doing international shipping, so you’ll need a Japanese address if you want to win. That said, regardless of whether we can win or not, we hope you’ll join us in contributing something! You can submit anything you want! Fanart, a video, a cover of a Little Busters! song, even bake a cake! This is something we can all get involved with, so let’s do our part to show the passion of the international Little Busters! fandom once more! You can follow the hashtag here.

Mission 4 is the celebration of the Little Busters! English Edition release on Steam! Just a quick update on the project, Baba himself stated on the stream that the project is just about finished, and they just need to polish up some stuff with Little Busters’ own version of the Dangopedia. Their current target is to have it out by the end of August, which is pretty soon! In preparation for this, they’re also planning to have youtube personality Joey the Anime Man make a series of gameplay videos giving explanations and impressions of the game. This series will be featured on the VisualArts Youtube channel starting July 1, 2017. UPDATE: The first video in the series has just been published, which you can check out below!

The fifth mission comes with good timing as it’s one of Key’s annual events: the Visual Arts Summer Sale 2017. Heavily featured in this sale will be Little Busters! with brand new goods that you can grab hold of. Some new goods have even popped up on online stores such as amiami, already available for pre-order. And much like last year’s sale and those beforehand, it’ll most likely be happening at the Gamers Akihabara branch (with maybe a few sub-branches here and there, who knows?). Personally we’re hoping for the return of some old merchandise like those cute baseball sprite phone charms, fingers crossed!

We’ll be sure to keep you guys up-to-date as more news for the 10th anniversary breaks.