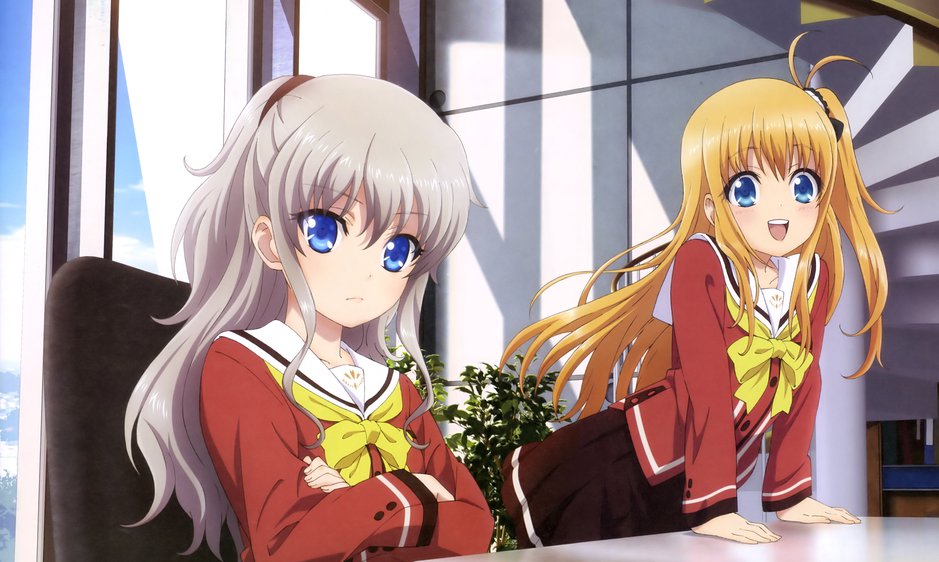 As the summer anime season approaches, we’ve finally been treated to a broadcast date for Charlotte’s premiere on Japanese television! A program listing on broadcasting station MBS’s website lists that Charlotte’s television broadcast will debut on their network on Saturday the 4th of July, 2015.

The following involves some of my own speculation. We’ve already been given an MBS broadcast time for the Charlotte Special Broadcast: 27:58, Saturday the 20th of June. Confused? This is a bit of a weird Japan thing. The time 27:58 is actually 3:58am, Sunday the 21st of June. This is where the speculation comes in, but if we assume that the regular Charlotte broadcast occupies the same timeslot as the Special Broadcast, then we can expect new episodes of Charlotte at approximately 4am each Sunday morning, Japan time. So yes, that would put the MBS premiere of Charlotte episode 1 on the 5th of July, rather than the 4th. Why you gotta be so confusing, Japan? At any rate, the wait is almost over!

UPDATE: Breaking news, but just announced on Charlotte’s official Twitter was that the first broadcast of Charlotte will be shown on Tokyo MX at July 4, 24:00, which is midnight of July 5th! Looks like MBS wasn’t lagging that far behind after all.

UPDATE: Anime News Network reports that Charlotte has been confirmed for simulcast on Hulu, Crunchyroll, Viewster and Daisuki on July 4, 2015. There should only be a few hours delay from the Japanese broadcast!

International simulcasting of the series has yet to be confirmed, but considering the overwhelming popularity of Angel Beats! in the west, it’s almost certain to happen. Considering Aniplex’s track record, Hulu and Crunchyroll simulcasts are all but confirmed. We’ll be sure to let you know once we receive confirmation, but with any luck they’ll be available no later than 3 hours after the initial broadcast. For those interested in applying for our Charlotte Anime Bookclub Podcast, we are planning on recording each episode on 7PM CST Saturday, theoretically a few hours after each episode’s broadcast. If you’re interested in applying, you have about 2 days left, so get in quick!

Thanks to forum member Zak89 for the news tip!