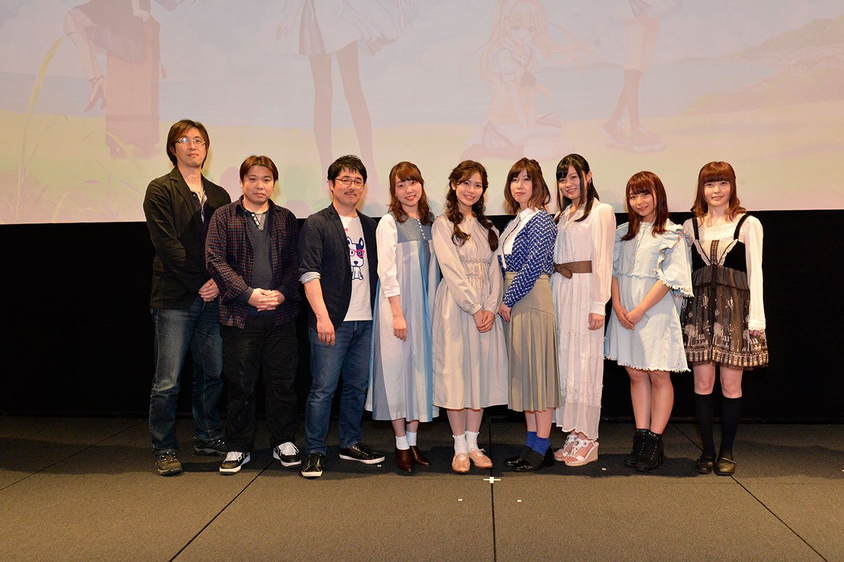 On March 23rd, VisualArt’s held a promotional event for Summer Pockets featuring the above cast and production members. The event was also streamed on Nico Live, so we’re able to summarize it for you. This kind of event do focus more on the attending personalities, so a lot of this stuff may sound familiar. For your convenience, the main news are: The game OP, mini games, as well as YURiKA and Runa Mizutani joining the project.

The event kicked off with the first showing of the game opening video which has now also been released publicly on Youtube. The video is made by Prhythm Vision with the animated cuts handled by Bibury Animation Studio. I’m a really big fan of how they animated the heroines’ key visuals.

After that Kai and the voice actors went on stage and started talking about the characters. Everyone was very careful about spoilers, so not a whole lot was said beyond what we’ve seen in the previous character intros. As a sort of short hand, Kai frequently mentioned handkerchiefs referencing how you’ll need one while reading; that’s how he avoided mentioning details most of the time. We were also shown some new CGs! 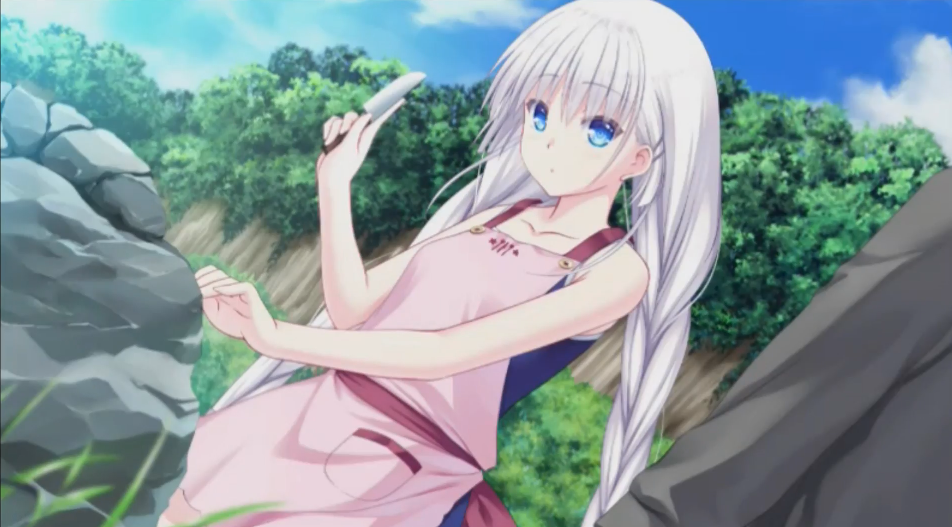 First up was Konomi Kohara’s introduction and impressions of Shiroha. She talked about how Shiroha looks cool and calm, but as she read further it was more that Shiroha really is quite a delicate girl who just doesn’t talk with others often. It takes time for her to open up. When the miko picture popped up on screen, Kohara struggled with what was okay to say, so Kai had to explain that it’s part of a local festival and you may need a handkerchief. Of course we already have an extract about that festival, and on the Youtube radio Kai talked about how Shiroha is a miko of the sea while Ao is a miko of the mountains. So when recording Shiroha’s lines, Kohara explains that she has a number of points to keep in mind about the character, but the script also has a lot of details about the scene, so there wasn’t that much to worry about during recording. 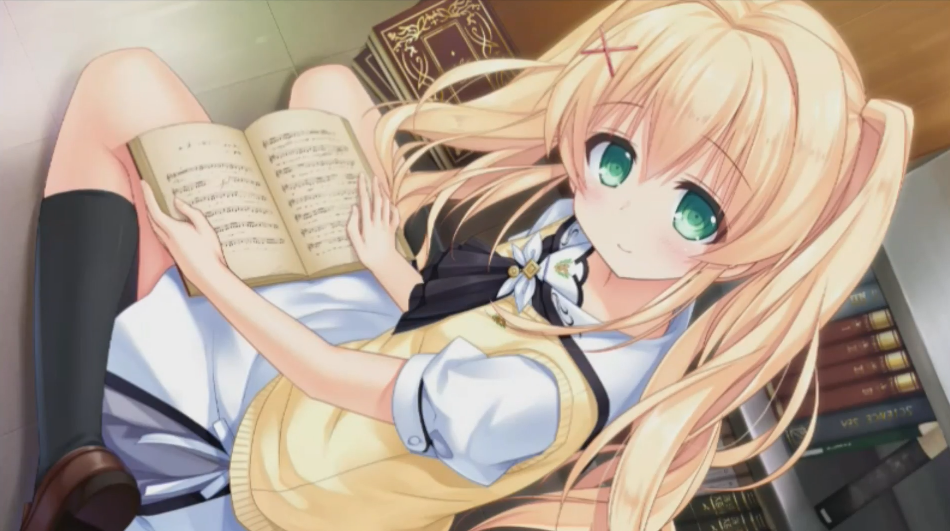 Up next was Emiri Iwai’s impressions of Tsumugi. Iwai seemed pretty nervous throughout the event, but she did well. She emphasized how she thinks Tsumugi is very cute and when auditioning she really wanted to play her. The above picture is from when they’re researching Tsumugi’s song, and Kai explains that because the song is so important to Tsumugi’s story they’ve recorded a character song for her. Iwai agreed with what Kohara said about the recordings, so there wasn’t much to say about that, though she brought up how she’d been performing many different variations of ‘Mugyu’ to fit different scenarios. 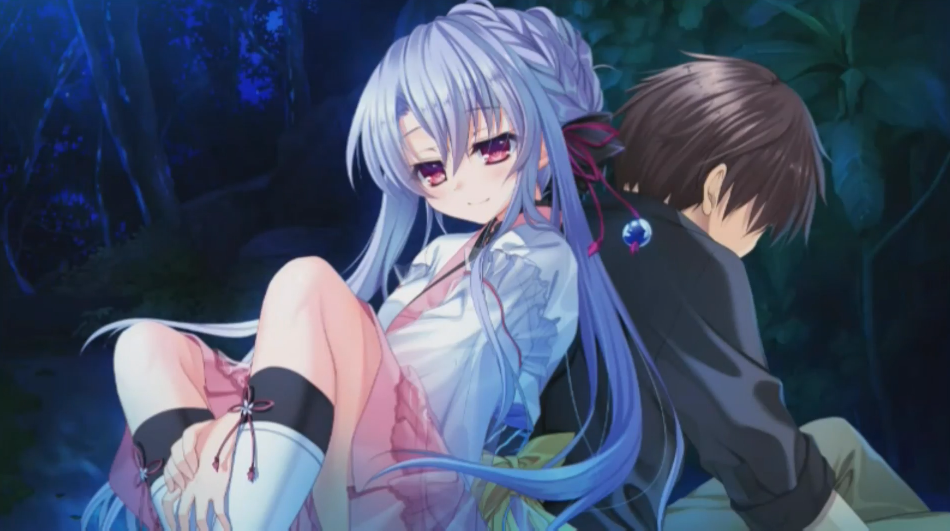 For Ao, Natsumi Takamori mentioned on how often you see Ao sleeping, but she also raises her voice a lot, so there’s a gap there. Being from the countryside herself, Takamori commented that Ao has that countryside friendliness to her; she’s engaging and talks with all kinds of people. Kai mentions that Ao is searching for those shining butterflies, and when they come up you should have your handkerchiefs ready. Takamori also brought up a scene of Ao eating lots and lots of shaved ice as a scene that left an impression and had a very summery feeling to it. 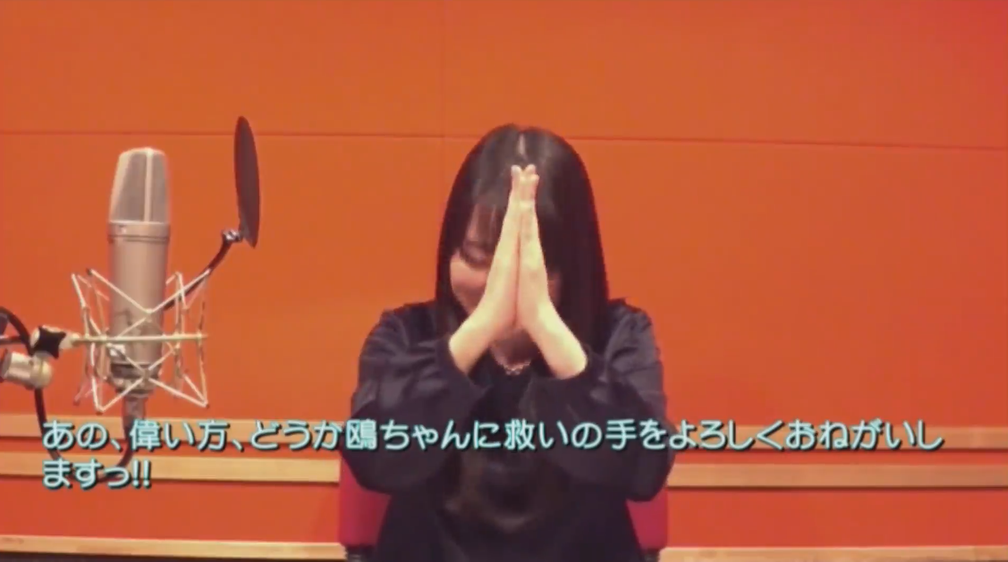 So Kamome’s voice actor, Tomomi Mineuchi, couldn’t be at the event itself, but had sent in a video of her character impressions. She explains how Kamome is based on this theme of a summer adventure with the walking around with a giant suitcase and treasure map. Kamome is an act first ask questions later kinda girl who will take you all over the island for various adventures, and she’ll do sporadic things like introduce herself with a “Call me Jonathan.” Mineuchi finished up by–rightfully–asking how come Kamome hadn’t appeared in any of the pre-order bonuses and urged someone higher up to save Kamome. (Come on, guys, Pirate Waifu is obviously the best.) So being put on the spot, Kai said that pre-orders from the VisualArt’s shop that was just added would include a Kamome tapestry(We haven’t seen the illustration yet).

After the heroines, everyone talked about some smaller topics like how Inari most definitely is a fox and ingame will make expressions with its face and tail. Kai brought up how they give characters favorite real-world snacks because it helps immerse a reader in the world. And then the topic of mini games was brought up. 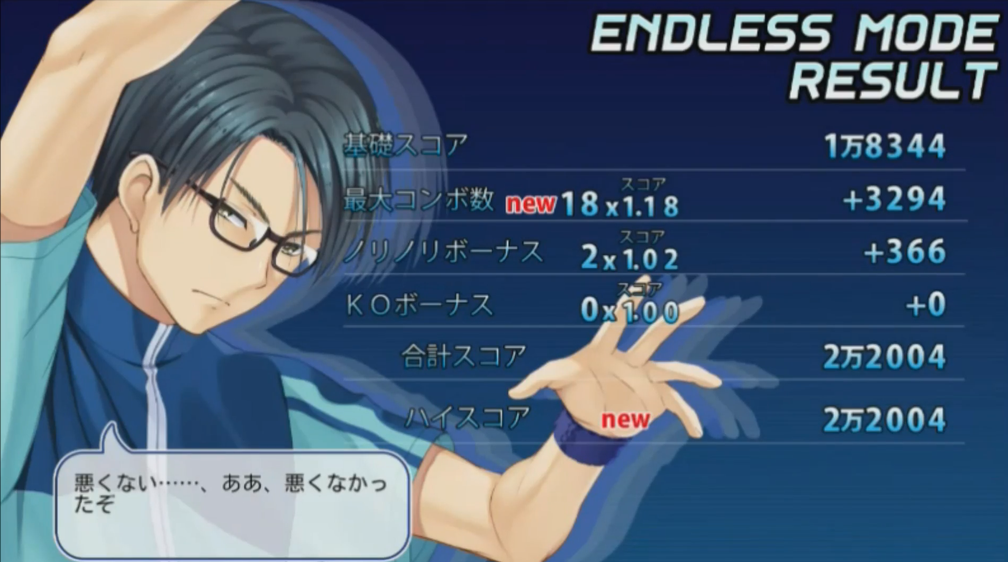 So the above is the score screen for a ping pong mini game. The two mini games they’ve talked about basically seem like upgrades to the ones in LB!. Similar to the batting practice, the ping pong is about hitting balls back by clicking them, and you get bonus points through various things. In the screen shot, we can see “Biggest Combo Bonus,” “KO Bonus” and “Norinori Bonus.” Norinori can mean thinking on your feet and being quick with coming up with ideas, but I can’t say what it would mean in terms of this game. Supposedly, there are super attacks involved and things get more and more crazy as you go. Iwai, who scored the highest among the actors, got 40 000 points, but apparently the maximum is 100 million. As a side note, Tenzen says in the picture “Not bad… Indeed, that wasn’t bad,” and Takamori commented that that’s the highest praise, so saying ’Not bad’ became a meme on the #サマポケ feed on Twitter.

The second game, which didn’t have any picture, is meant to be an evolution of the battle ranking. You can put out animal feed at night in order to capture animals, bugs or sometimes Inari, and then they will fight for you in a fashion legally distinct from Pokémon. They didn’t say much; Kai says it’s an auto battle, and you should aim to be #1. Honestly, these seem insane, but I can’t say I’m not intrigued. 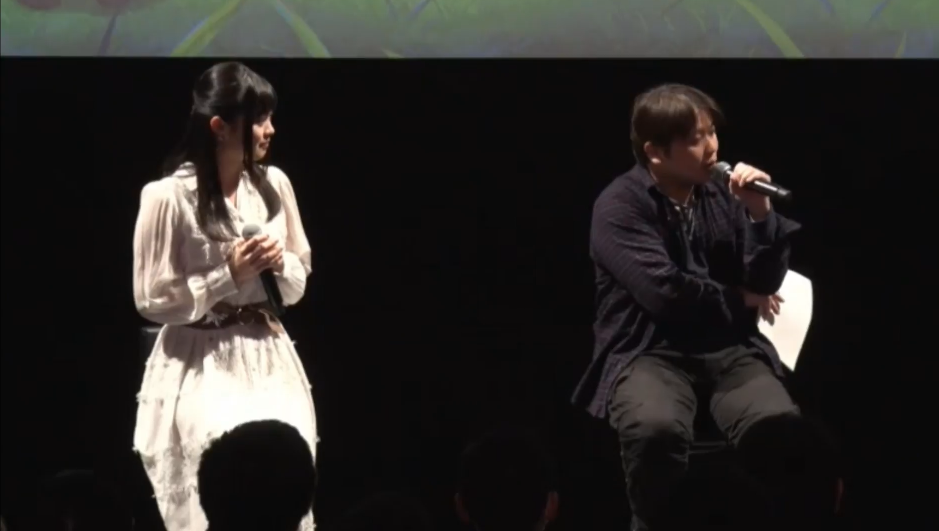 After that, the heroine actors exited the stage and were replaced by Shinji Orito and Konomi Suzuki who were gonna talk about the music. Orito went into how he had a lot more responsibilities this time because they were doing the music opposite from normal. Apparently, the writers usually order a number of songs with explanations of the emotions needed; this time however, Orito was looking through the script and story and composed based on that. For the right summery feel, they mostly use acoustic instruments for the soundtrack.

Suzuki had been very surprised when she got the offer to perform the OP, as she didn’t usually do songs in Key’s style, but Orito had been very interested in working with her for a while. Orito mentioned that he was shocked by how smoothly the recording went and that Suzuki was too good. Suzuki responded that Alka Tale might be the song she’s practiced the most ever. When asked about the lyrics and title, Kai had to dodge the question simply recommending people to look back on them after completing the game.

It was during this segment when YURiKA and Runa Mizutani made their surprise appearance with the announcement that they’ll be performing insert songs. Orito wanted to work with Mizutani again after Rewrite, so he made a strong push for having her on the project. YURiKA had sent in an application tape which caught Kai’s attention, and she seemed absolutely ecstatic about the whole thing. Though the two pretty much left as suddenly as they came to make room for Suzuki to perform Alka Tale in full, which if you didn’t hear is already available for purchase! Following the performance, Suzuki revealed that she would be doing the voice of Inari. This is similar to Lia voicing Dorj in LB!, though I guess it could be more. Dorj was just a fat cat; we don’t know what kind of god/spirit animal Inari is.

The rest of the event was just raffling away merch and everyone saying their thanks etc. Overall, the event was really fun, definitely a Not Bad/10. Seeing production and actors talking (semi-)freely about a project makes it feel more down-to-earth. So that’s a decent amount of stuff to think about, and please share those thoughts in the comments or our speculation topic.