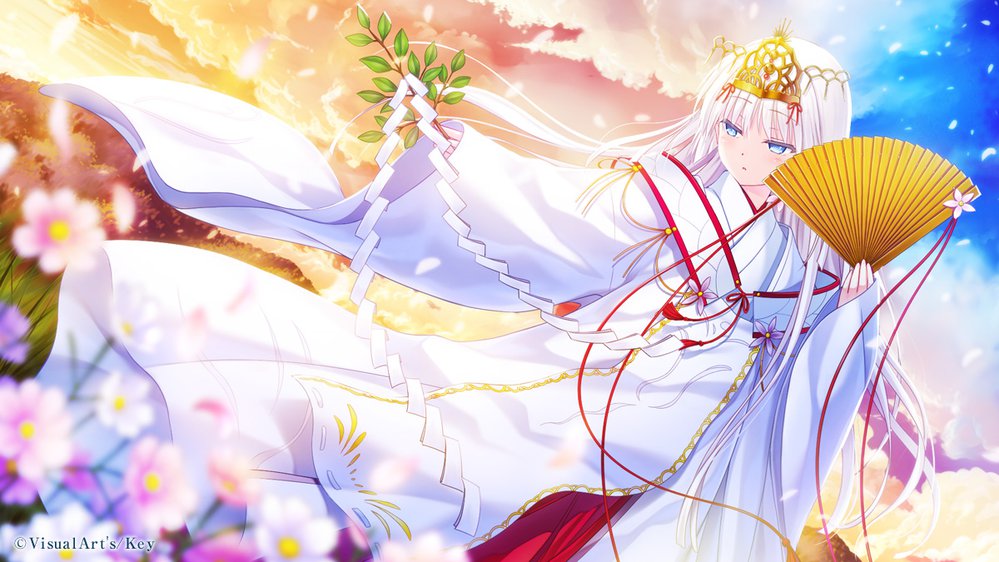 A deluge of Summer Pockets details have been unveiled by VisualArt’s in the lead-up to release on the 29th of June including new CGs, new characters, and all their voice actors! This info comes from the Key Twitter, the Official Website and Dengeki G’s Magazine.

A quick note before we get to the the cast, it’s likely that many or perhaps all of these actors will be unfamiliar to you. If that’s the case, you can usually find voice samples by following the links to their official sites. Enough with the boring stuff, let’s start with the voice actors for the four heroines announced on February 16.

And now for the supporting characters and actors revealed on the 28th. 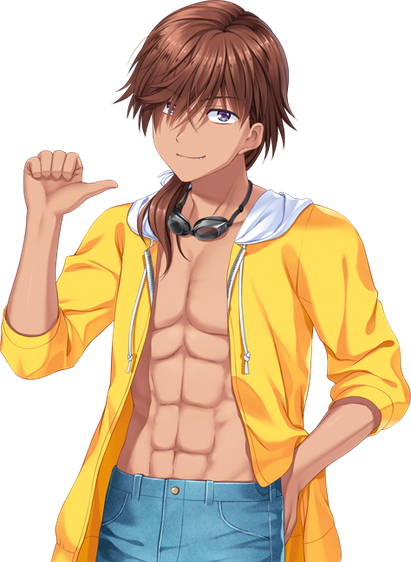 A boy who lives on the island. He has a tendency to take off his clothes regardless of place or time. He has remodeled a warehouse in the mountains to make a secret base. It has become a gathering spot for his peers. 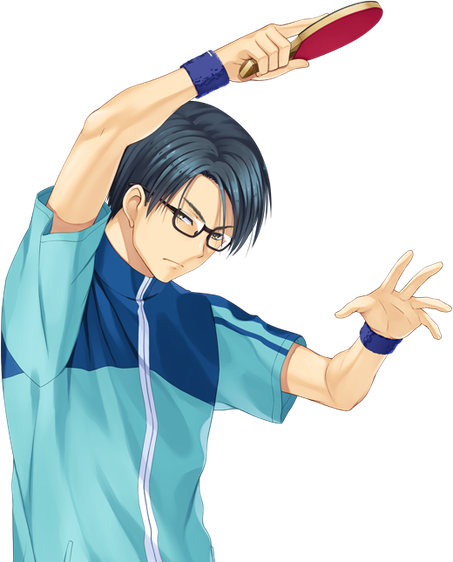 Another boy who lives on the island. On the outside, he looks very serious and cool. However, he has dedicated too much of his time to table tennis, so his speech and manners are often very unusual. He brought a ping pong table to his and Ryoichi’s secret base and trains rigorously every day.

A girl who lives on the island. She’s a member of the Torishirojima Public Order Executives, protecting the island’s morals daily. She’s also in charge of radio broadcasts across the island, and she will keep look out for trouble makers from atop the radio tower. She carries her own customized water gun called the “Hydro Gladiator Kai” in order to mercilessly punish evil doers. 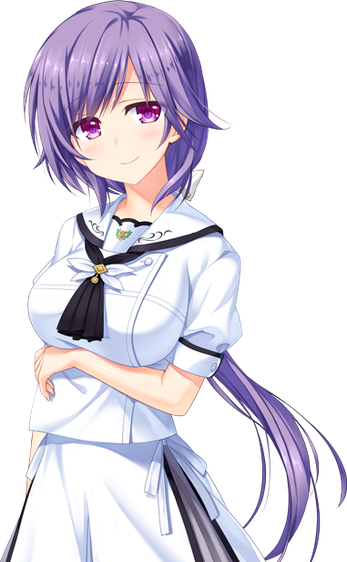 She’s the student council president at the heroines’ school on the mainland. During summer vacation, she traveles to the island to meet with Tsumugi. She has an extraordinary love and respect for breasts. It’s not that she’s interested in women; she just has a pure admiration for breasts. 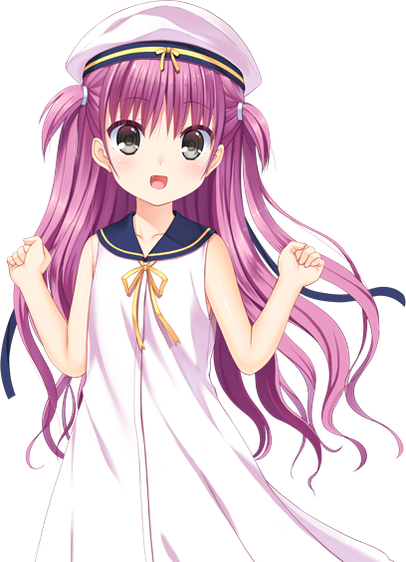 This young girl is Hairi’s second cousin. She has lived her whole life in the city but always admired life in the countryside, and that’s why she’s come to Torishirojima for the summer. During the summer, she also cooks for the protagonist. Her specialty is fried rice; she’s extremely passionate about fried rice.

She is the protagonist’s mother’s younger sister, making her Hairi’s aunt. She’s involved with handling the items left behind by the late Mrs. Kato who lived alone on the island. She will excitedly sort through the antiques sleeping in the Kato family storehouse. She’s also interested in archaeology and is able to interpret old texts. 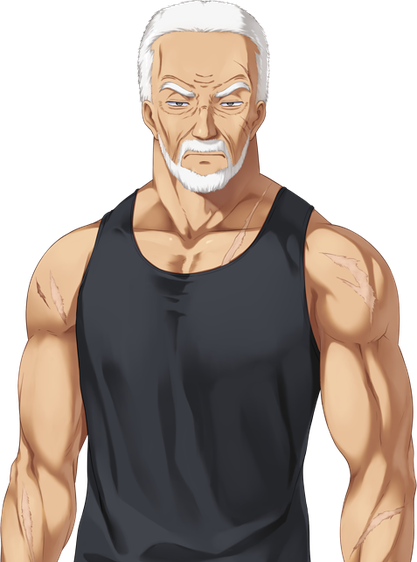 He is Shiroha’s grandfather, sometimes also referred to as Elder Naruse. His body is covered in scars from a life of battle. The most painful strike came from his wife. He is an expert in Torishirojima’s traditional water martial arts. 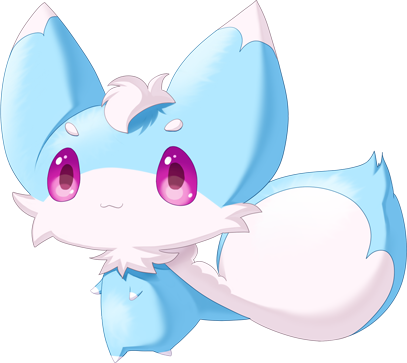 A wild fox(?) that lives on Torishirojima. It’s often seen together with Ao Sorakado. Despite being an animal(?), it understands human speech. It’s really smart and can read the mood of a situation. Its cry sounds like “Pon”.

Director Kai mentions on Akiba Blog that they, for the first time, tried a 2 stage audition with Summer Pockets. For the first stage applicants were allowed to freely send in material that the staff would listen to and judge. Apparently, they had received over 2000 clips from around 700 applicants. Sorting through these reportedly required Kai and assistant director yucchi to consume a large amount of Monster. After that ordeal, a select number of applicants were called in for a studio audition so that the staff could single it down to the final cast.

Furthermore, the Dengeki G’s Magazine April edition includes a number of previously unseen CGs and story extracts; also included are some new out-of-context quotes seemingly meant to represent each heroine. Thanks to Moetron for the scans! 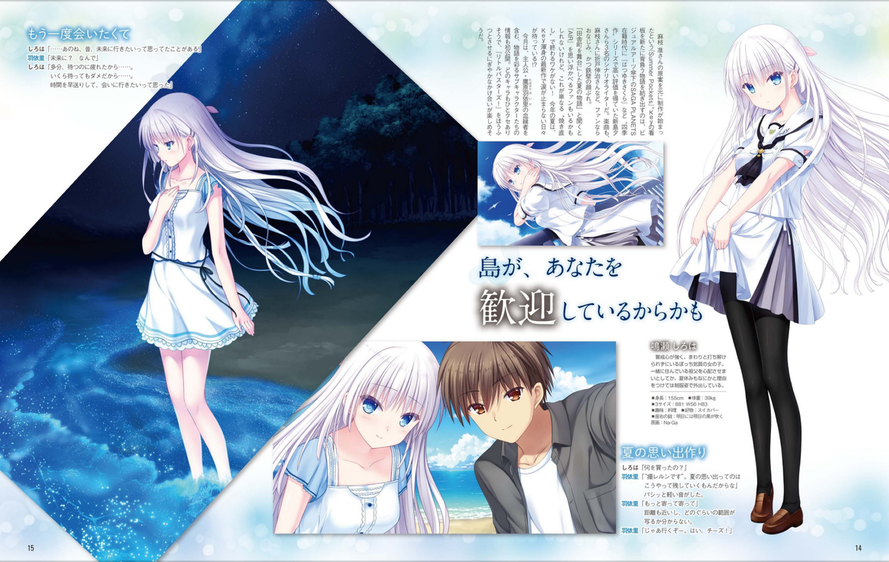 Longing for a Reunion
Shiroha: “…You know, in the past, I wished to traveling into the future.”
Hairi: “The future? Why?”
Shiroha: “I think I was tired of waiting… It didn’t matter how much I waited… So I wanted to skip ahead and meet [placeholder] right away.” (TL Note: There’s no way for me to know who or what she wants to meet.)

"It might be that the island is welcoming you"

Creating Summer Memories
Shiroha: “What did you buy?”
Hairi: “A disposable camera, just to like remember everything that happened this summer.”
The camera made a small click.
Hairi: “Come closer. Closer.”
The camera’s really close, so I’m not sure how much will be in frame.
Hairi: “Here we go, say cheese!” 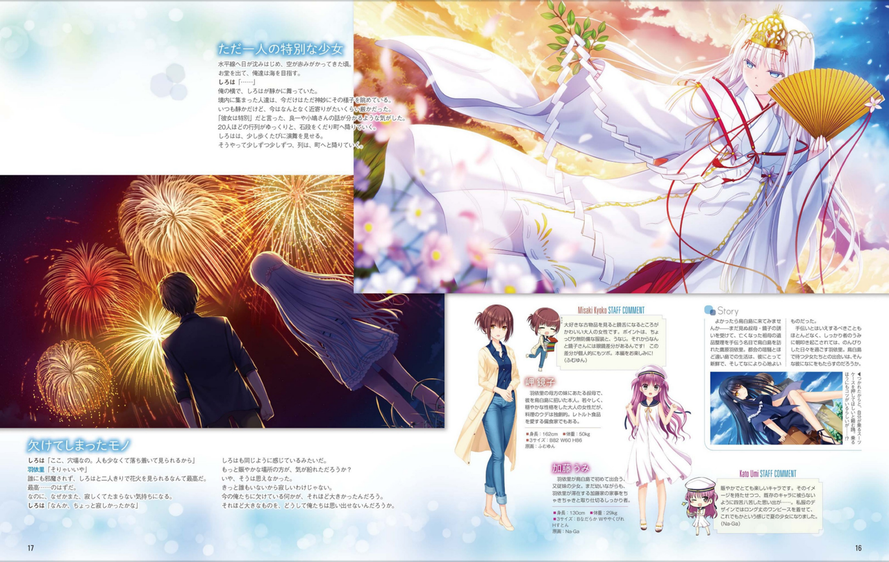 A Lone, Special Girl
At the time when the Sun was sinking into the horizon and the sky was turning red.
We left the shrine and looked out towards the sea again.
Shiroha: “…”
By my side Shiroha danced silently.
The people gathered in the grounds just patiently gazed at her.
She was always quiet, but now she was so elegant that one could hardly think of approaching her.
I’m starting to get why Ryoichi and Kobato-san would say “She’s special.”
The parade of around 20 people slowly descended the stone steps towards the town.
After walking a bit, Shiroha would show off her dance.
Like that, step by step, the parade made its way towards the town.

Whatever We’re Missing
Shiroha: “Most people don’t know of this place, so we’ll be able to see everything in peace.”
Hairi: “That’s cool!”
I can watch the fireworks along with Shiroha without anyone interjecting. That’s awesome.
Or it should be…
But again, I can’t help feeling lonely.
Shiroha: “Though it might be a bit lonely.”
I guess Shiroha feels the same.
Maybe a more lively place would’ve distracted me from these feelings?
No, I doubt it.
I’m not lonely because no one’s around.
Whatever we’re missing is probably just that big.
But if it is so big, why can’t we remember anything? 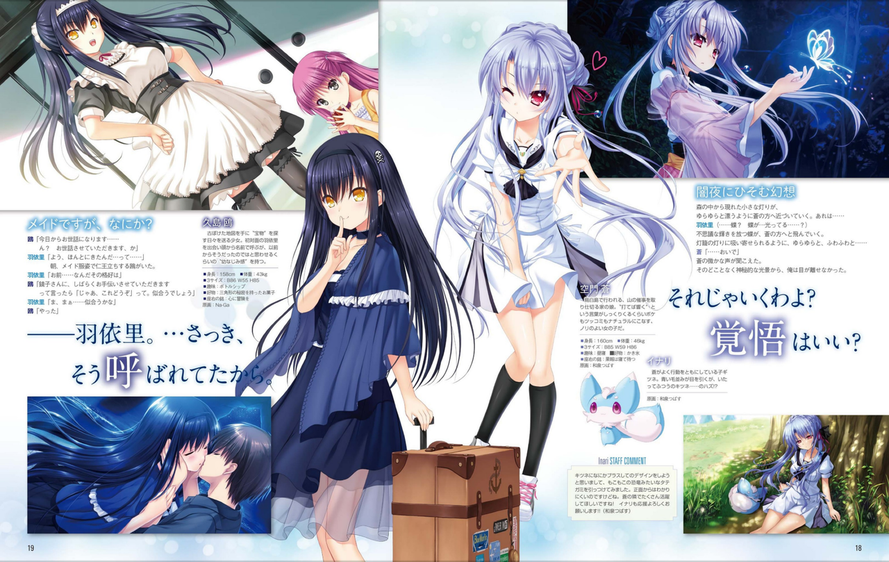 Indeed, I’m a Maid, What of It?
Kamome: “I’ll be in your care from today… Hm? Or you’ll be in my care, I guess.”
Hairi: “Sup, you actually came… What the…”
At this early hour, I was faced by a confident Kamome dressed as a maid.
Hairi: “You… What is that outfit?”
Kamome: “When I told Kyoko-san I would be helping out here for a while, she just said to take this. Looks good, doesn’t it?”
Hairi: “Ye, yeah… Looks fine, I guess.”
Kamome: “Yes!”

"Hairi, that’s what they called you earlier"

The Illusion Hiding in the Dark Night
A small light appeared from the forest.
Fluttering and quivering, it was approaching Ao. What is it…
Hairi: (…A butterfly? And it’s… glowing?)
The strangely radiating butterfly flew towards Ao.
As if draw in by the lantern’s light, softly, timidly…
Ao: “…Come here.”
I heard Ao’s faint call.
I couldn’t take my eyes off the mystical scene in front of me.

"Then here we go. Have you said your prayers?" 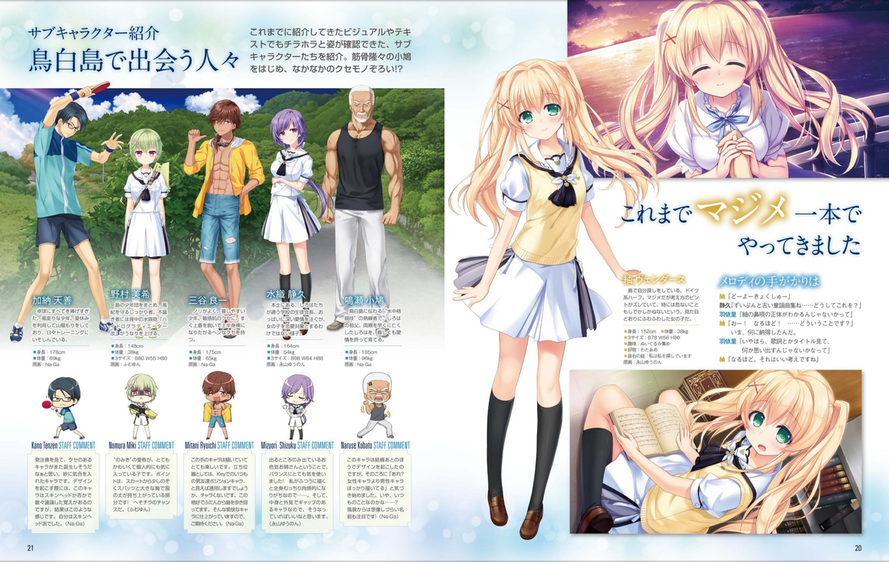 "I’ve come this far by always being earnest."

Searching for the Melody
Tsumugi: “An-tho-loh-jee”
Shizuku: “That’s a rather old children’s song anthology… And what are you doing with this?”
Hairi: “I figured we could learn what it is Tsumugi’s humming all the time.”
Tsumugi: “OHH! I get it! …What do you mean?”
What did she even get excited about?
Hairi: “You know, you might remember something if we look up the lyrics or the title.”
Tsumugi: “I see, that sound like a good idea.”

Update: A preview of the opening song Alca Tale has been published, which you can listen to above!

Now that’s a whole lot of stuff to process at once. We’re getting a decent idea of what the heroines are like, and the surrounding world is also starting to take shape. Please share your thoughts in the comments, and we promise to be back with more articles shortly.