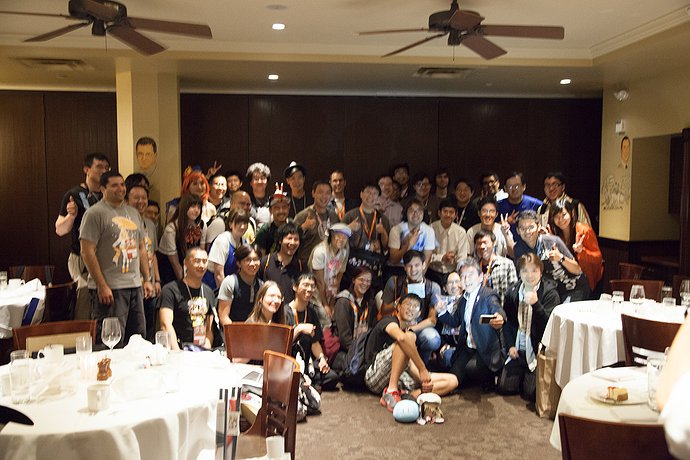 Anime Expo just concluded last week, and boy was it a treat for Key fans and Visual Novel fans as well! And, if you were keeping track, Key also held a Fan Party where they allowed fans to have dinner and talk with the staff from Key who came all the way to Los Angeles! While a good bunch of our members were able to join in, one notable member, @cloud668, was there as the interpreter and a host of the Key Fan party itself! He was kind enough to even write up a summary on the forum. We’ve layed it out on this blog for your reading pleasure, so we hope you enjoy this glimpse to the Key fan party, care of @cloud668!

Since there isn’t a summary for the Key Fan Party yet (I’m not sure if @Likeaneko or @rune_devros planned to write one), so I’ll try to write one from the perspective of the (terrible) interpreter and MC. (Disclaimer: all slides are still the property of VisualArts even though I made them, and I really hope nobody minds that I’m putting some of them here.)

The event started off with a bunch of people filing into the room (which we took about five minutes to sort out and get everyone seated) while we were trying to get the screen working. After everyone was seated, we quickly introduced ourselves (we gave a Kaza shoutout!) and the guests, namely Mr. Baba, Mr. Orito, and Kudokou aka Mr. Toyoizumi. Also in attendance were Frontwing’s and Bushiroad USA’s presidents (and some staff). Lia was going to be there, but she wasn’t able to come.

After everyone ordered (the other interpreter, Anthony or krymsun ordered for me, and we both didn’t like the veal dish we had), we went straight to our presentation. The presentation started off with the Tomoyo After OP (which we played twice because we couldn’t get the sound working the first time), after which we revealed (about ten hours late at that point) that Tomoyo After was released on Steam! 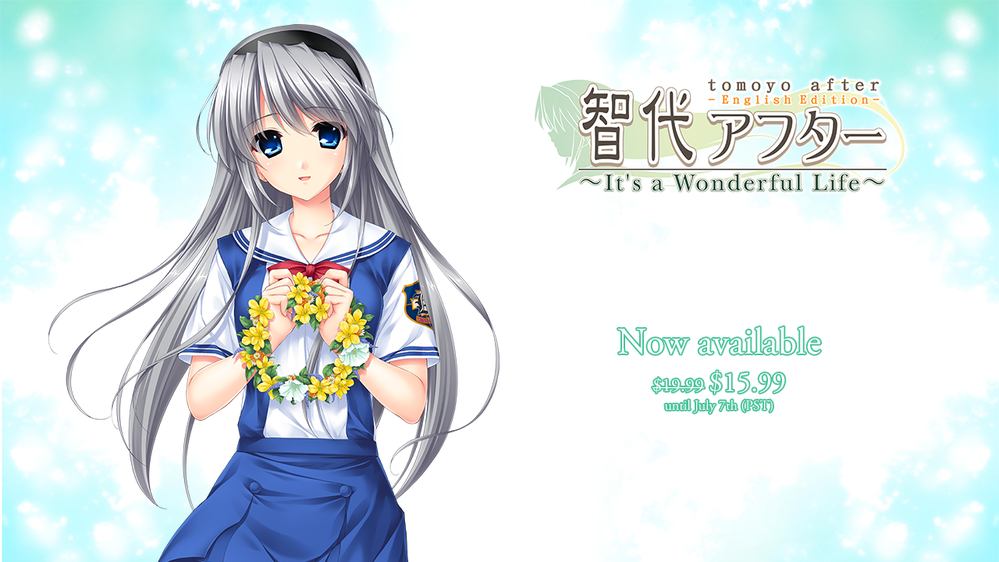 We then had a brief summary of the games that have been released thus far in English: planetarian (which we also mentioned that there’s an HD version and anime coming out, and announced that Funimation acquired streaming rights), Clannad, and Clannad Side Stories. 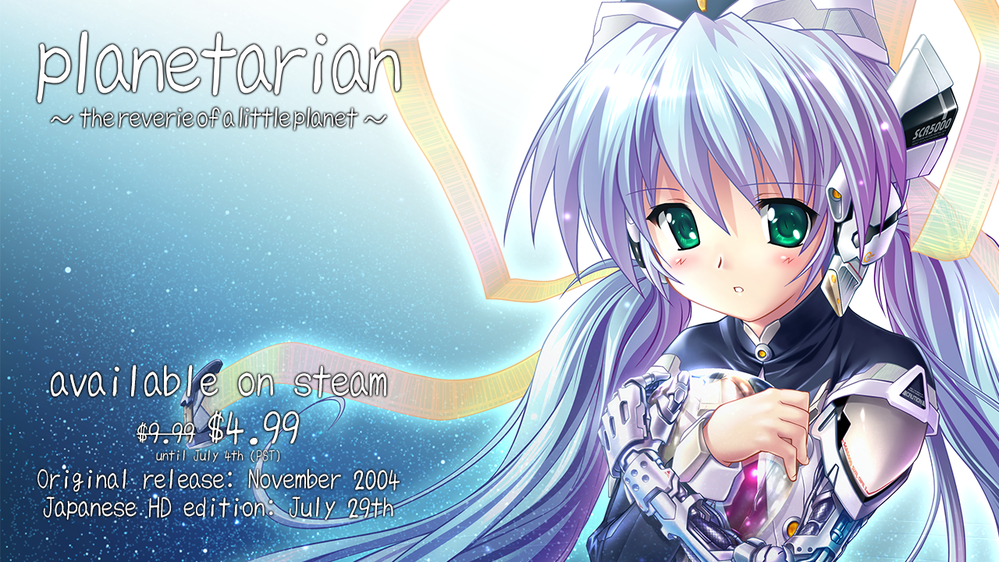 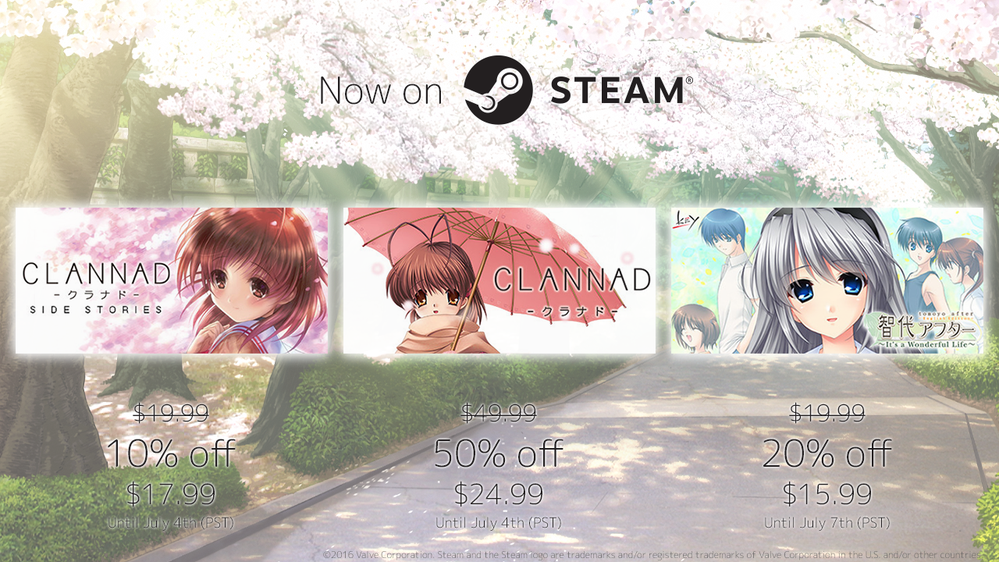 ^ lies. Clannad is still 50% off at the time of writing and Tomoyo After’s sale will last until the 8th.

After that, we went into the upcoming English releases like Harmonia, Little Busters!, Rewrite, and Angel Beats! 1st Beat. None of them had a release date, but Harmonia and Little Busters! are soonTM. 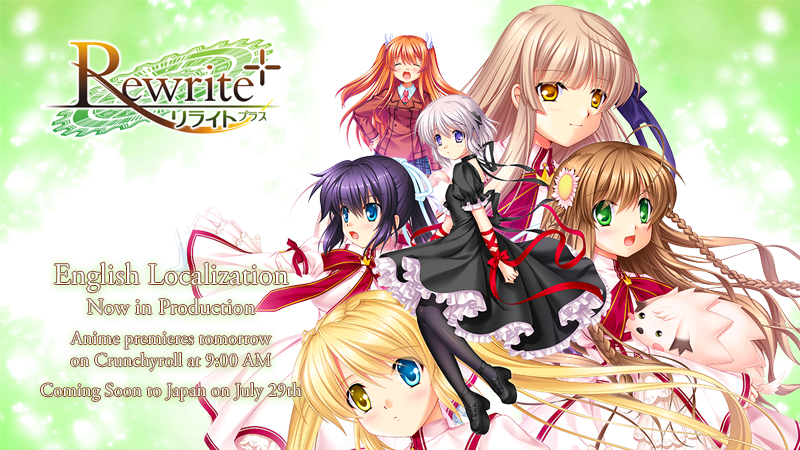 We ended the presentation with information of the Blu-ray release of the Charlotte anime, after which we had a brief introduction of Frontwing’s president (I think I have it in the right order). Frontwing’s president also noted that their company has English releases, and after Mr. Baba asked him to name some of their titles, he named Grisaia. In my own translation, I added that Grisaia is currently available from Sentai Filmworks, which he then commented quietly to his staff that Sentai has everything (since I’ve basically been saying “available from Sentai Filmworks” all evening for Clannad and Angel Beats!).

During dinner, we played tracks from the upcoming “Rewrite Arrange Album ‘Selene’”. In Mr. Orito’s words (and my terrible translation), the Rewrite soundtrack was generally a lot more calm, so for this arrangement, they went for a more aggressive approach. Obviously, I can’t share the tracks, but it can be previewed here on YouTube.

At this point, dinner was served (that doesn’t mean I get to eat, though). We also got news that Lia unfortunately couldn’t be there, but we could ask her one question (which I forgot) and that we’d get a message from her.

A little bit into the dinner, there was also what Baba dubbed the “Bushiroad corner”, but unfortunately at this point, I don’t remember much of anything.

We also got a message from Lia (which took me two tries to translate since it was a bit too long and fast for me to remember everything). Her message (retranslated/reedited from my notes and paraphrased by yours truly) is as follows:

Hello everyone, my name is Lia. I really wanted to come to the fan party today, but unfortunately I am not feeling well. I will be performing at the Anime Expo masquerade, so please come. Please also stop by the Key booth. I’m so sorry that I couldn’t be here. Thank you.

During the dinner, we also got news that Mr. Maeda was discharged from the hospital, and to commemorate this, we took a picture and tweeted it to him!

^ Anthony (krymsun) is the guy in red, and my seat is next to his. As you can see, my food is still untouched.

Next, we headed into the janken (rock paper scissors) competition, which basically gave out enough swag for everyone. This included things such as signed copies of Na-Ga’s and Itaru Hinoue’s artbooks, analog albums of “Little Busters!” (and something else), “one’s future” CDs, character cushions, Grisaia clear files, a signed Grisaia artwork by Akio Watanabe, ten Tomoyo After steam keys, and a lot more (which I don’t remember). Sadly, as your interpreter and host for the night, I wasn’t eligible for any of these (and I really, really, really wanted the artbook). 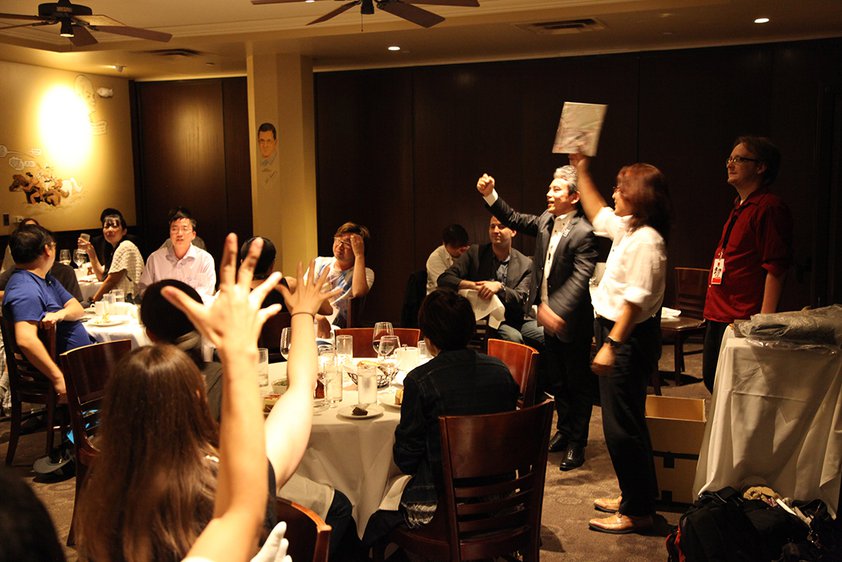 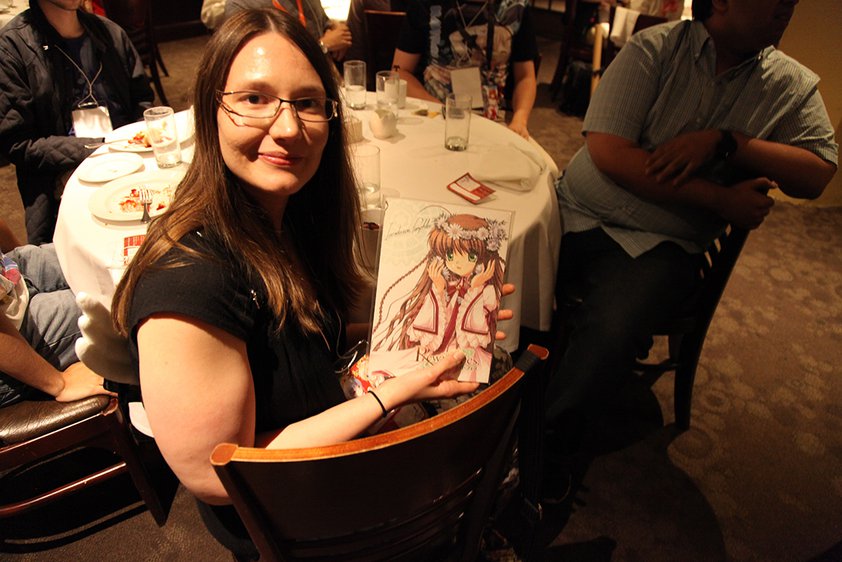 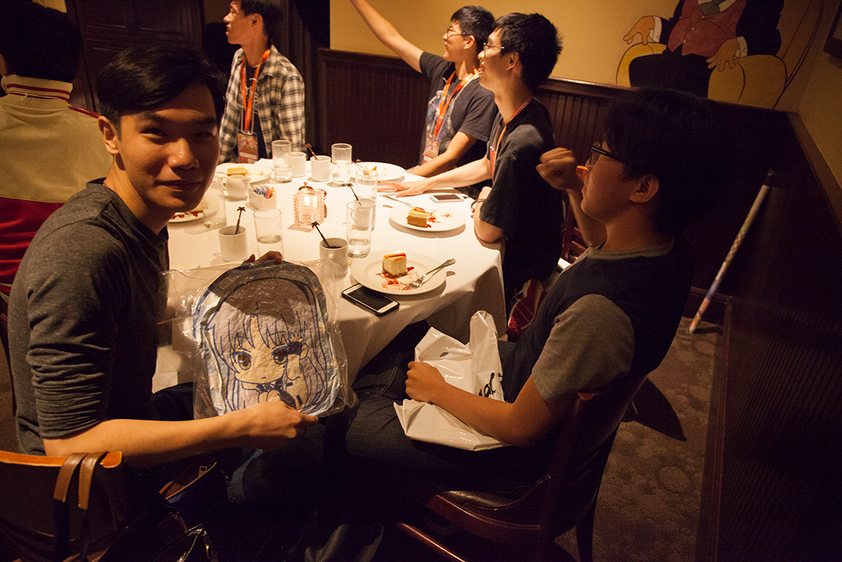 It was immediately after this that I busted out a wooden carved starfish (by Geinonen for the Key15th project) and presented it to Mr. Baba with an obligatory Fuko-like d-douzo. 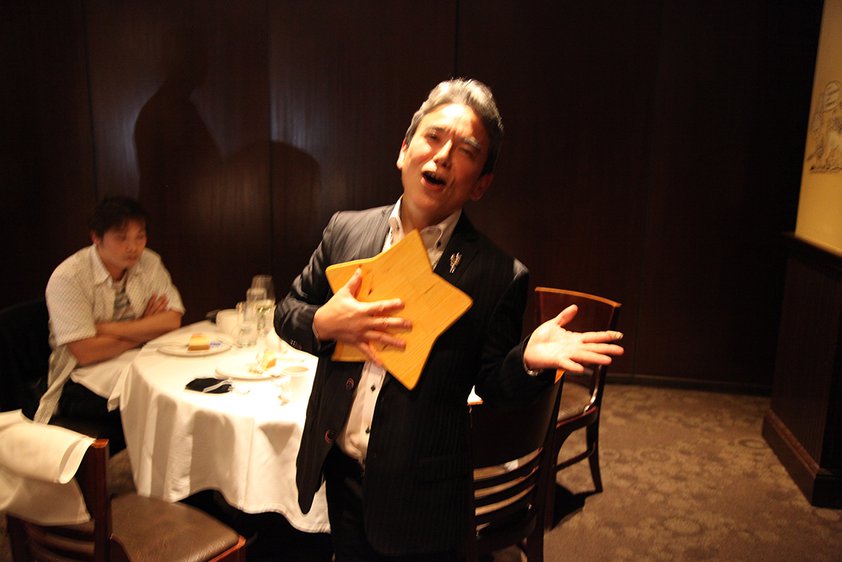 Immediately after that, I went into how the starfish was created as part of the Key15th project, and that we at Kazamatsuri are reviving it as a new project called the K.E.Y.! Sadly, even though @Aspirety prepared slides for me (and I did put them in my presentation), we didn’t have the time to bring it back up on the screen, and so I just proceeded to yell out whatever I could remember off the top of my head.

Then, we moved into the Q&A section.

So I’ll try to list the things (in completely arbitrary order) that I remember were asked/answered at the Key Fan party (hopefully others can fill in anything I missed or got wrong, which is probably most of it). Please don’t hit me if I forgot anything important or any of this is wrong because my head was exploding at that point.

Q: What is Orito’s favourite composition?

A: Right now, it is a track from Harmonia (and I’ve since forgotten its title). Baba said he was lying and that it was “Tori no Uta”, which Orito claimed was his previous favourite.

Q: Who is Baba’s best girl?

A: Ayu from Kanon, and the saddest moment for him was the “Please forget […]” quote.

Q: What is Baba’s favorite ability from Charlotte?

A: Hatsuyuki Sakura by Saga Planets.
_This is where I proceeded to ask him if they would consider an English localization, to which he answered yes._

Q: Who is the one character that Baba wants to meet?

A: Ushio from Clannad.

Q: Who is best Rewrite girl? _(thanks to @Likeaneko for reminding me)_

A: Not a best girl, but Kotarou. _laughter_ If it has to be a girl, it’s Kagari.

Q: How did Orito come up with the YOSHINO song?

A: The inspiration of the song is the high school baseball team songs used in tournaments (Baba described this as school songs).

Q: How does Baba get all the energy to go to conventions?

A: He gets all his energy from meeting fans (especially girls) _[I was so shocked that I couldn’t come up with how to say it]_.

Q: Will Key ever consider a game with female protagonists?

A: Key has a certain theme going when it comes to stories, which is that there is a girl who faces a cruel fate, and a boy comes along to help resolve that while the two of them fall in love (iirc). Because of this theme, there are currently no plans for a Key title with a female protagonist. However, a game from a new VisualArts brand that features a female protagonist is currently in the works.

There was also a question to Bushiroad USA’s president and Mr. Baba about the meaning behind a quote on one of the VA Weiss Schwarz cards, but I forgot the exact quote.

This is all the questions I can remember right now; I’ll add to this list if I can think of anything else.

In the end, we all took a group photo as well (without me). Unfortunately, my photography skills is not good enough to take a picture for those times I need to yell out incoherent phrases in English and Japanese for two hours straight, but here’s my attempt (with some fixes): 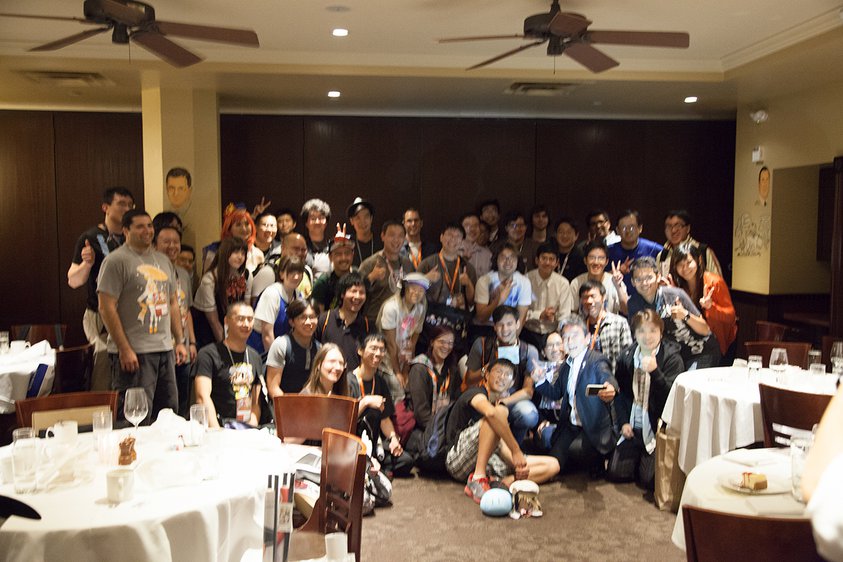 After this, everyone basically formed a huge line to line up with Mr. Baba and Mr. Orito for individual pictures. I think @rune_devros or @Likeaneko or someone else tried to do a Kaza group photo, but the line was simply too much for it to happen (sorry, @Aspirety!)

In the end, I guess (and according to krymsun/Anthony), it all turned out well, though this I learned that I need to work on my Japanese speaking skills.

(Slides of the presentation have been provided by @cloud668, and can be accessed here: (Low Quality/High Quality)

We hope you enjoyed that write-up, and are definitely looking forward to Key’s plans for next year! This is the second Key Fan Party now (the first one being in Paris last year), so we won’t be surprised if a third one happens in the future.