"What it means to be alive is that you aren’t alone."

CLANNAD is Key’s 3rd visual novel, first released in 2004. It follows the daily life of our protagonist, the high school delinquent Tomoya Okazaki. He holds a bitter resentment for the town he’s grown up in that’s full of memories he’d rather forget. One day, he meets a girl on the way to school muttering to herself, trying to gain the courage to enter school and make new friends. On some kind of whim, Tomoya gives her the courage she needs by telling her to continue searching for fun and happy things, and their tale begins. The story continues to follow Tomoya’s daily life, the time spent with his idiotic yet reliable friend Sunohara, and his rapid involvement with a number of different characters in the school and throughout the town. The reader’s decisions in the common route determine which character’s route they will follow, and in each character’s route Tomoya will find himself involved with that character’s personal problems, and walk with them on a path toward some kind of resolution. Alongside this, another story is gradually revealed about a girl living alone in an empty world that has ended, who constructs a companion out of junk. CLANNAD, particularly the After Story arc, is praised by many as one of the most tear-jerking stories there is, and many consider it the peak of Jun Maeda’s writing career.

There are 10 character routes in total (11 if you count the Fujibyashi twins separately), plus the final arc ‘After Story’ which is unlocked after completing all the character routes (excluding Ryou) and collecting all 8 ‘lights’. Touya Okana wrote the Sunohara route, Yuuichi Suzumoto wrote Kotomi, Kai wrote Kyou/Ryou, Kappei, and the second half of Yukine. Jun Maeda wrote the remaining 5 routes and After Story, as well as the first half of Yukine. The line count for the game is about 100432 lines, or approximately 85 hours of gameplay. Keep in mind that estimates of playtime of a visual novel are quite vague; some are much shorter, some much longer. It is the 3rd longest Key game in terms of line count, second only to Rewrite and Little Busters! EX by a small amount.

The regular edition of the game was first released on the 28th of April, 2004 after some delays. An updated version of the game including full voice acting titled CLANNAD Full Voice was released 4 years later on the 29th of February, 2008. CLANNAD also saw a re-release in the Key Memorial Box in 2009, as well as another standalone release titled CLANNAD Memorial Edition on the 28th of May, 2010. Numerous consumer ports were also released on PS2, Xbox 360, PS3, Playstation Network, Android, PSP, and Playstation Vita. The visual novel has spawned a franchise of novels, manga, drama CDs, an animated film, an anime Series, music, and internet radio shows. Among them was CLANNAD ~Hikari Mimamoru Sakamichi de~, otherwise known as CLANNAD Side Stories, which was recently released in English for the first time on Steam. A spinoff sequel starring Tomoyo Sakagami titled Tomoyo After ~It’s a Wonderful Life~ was released a year after the original in 2005.

You can purchase the game in English on Steam at the link below!

If you find yourself in need of a Walkthrough, we’ve prepared one for you right here!

You can also purchase CLANNAD Side Stories on Steam at the link below.

CLANNAD received two anime adaptations: a movie produced by Toei Animation which was critically panned, and a critically acclaimed 49-episode series produced by Kyoto Animation which begun broadcasting in 2007. The series covers almost the entirety of the visual novel’s story, skimming over two routes and skipping over another two entirely, but nonetheless it’s generally accepted as a very good adaptation. Season 1 includes 24 episodes and covers majority of the character routes. 22 episodes cover the main story, while 2 episodes are extras (The Events of the Summer Holidays and Another World: Tomoyo Chapter). Season 2 (titled CLANNAD After Story) contains 25 episodes and covers the remaining 3 arcs of the school life story before jumping into the After Story arc. The last 3 episodes are extras (The Events from One Year Before, a recap episode, and Another World: Kyou Chapter).
You can purchase the Amine series in the US on DVD or Blu Ray through Sentai Filmworks (Season 1, After Story), in the UK on DVD through Manga Entertainment (Season 1, After Story) and in Australia on DVD through Siren Visual (Season 1, After Story).
You can also stream the series from The Anime Network (Season 1, After Story) if you live in the US. 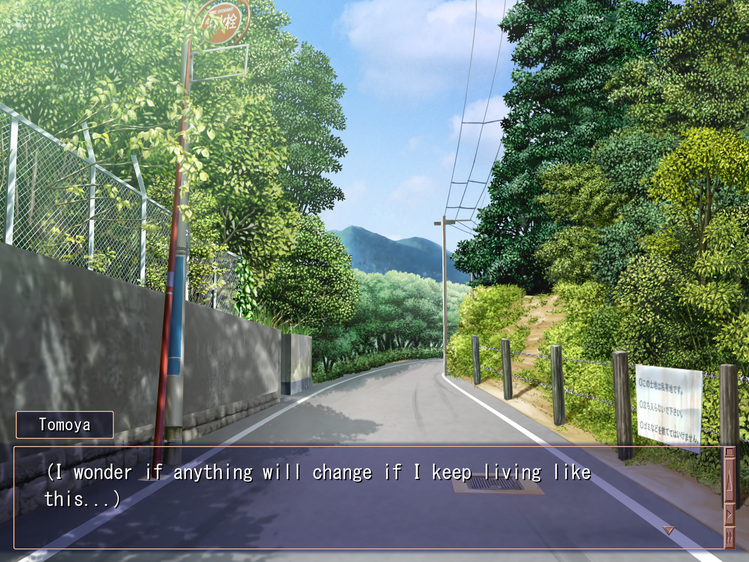 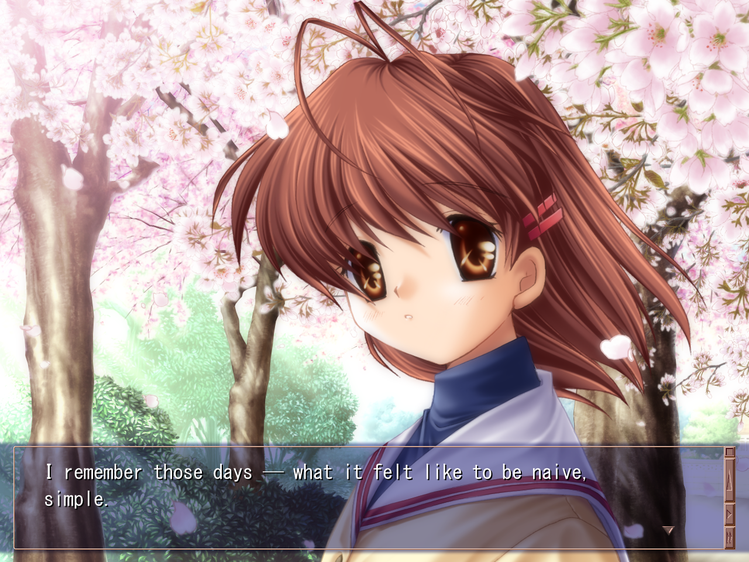 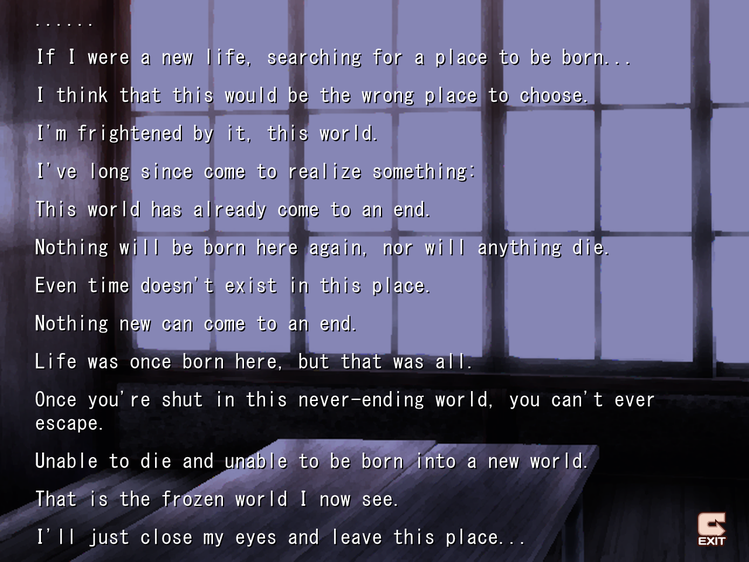 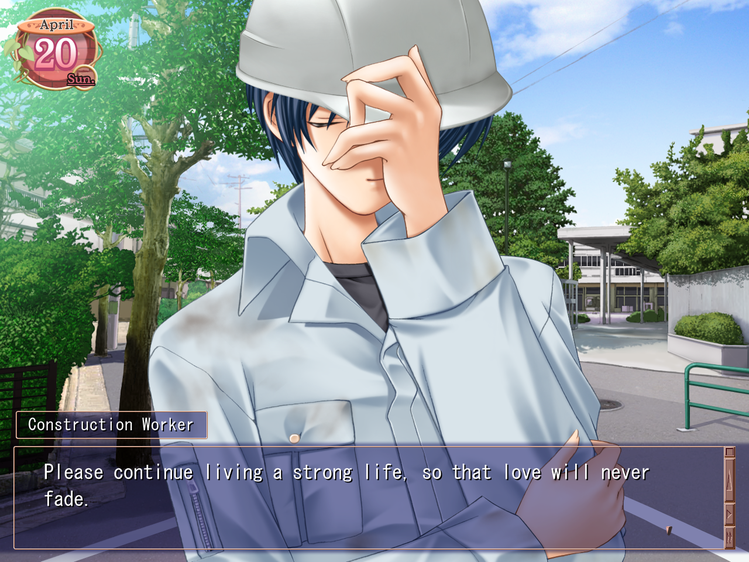 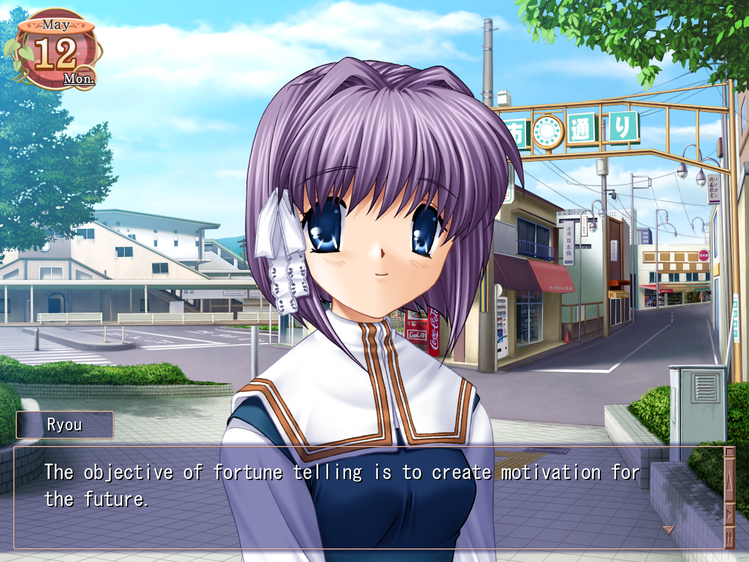 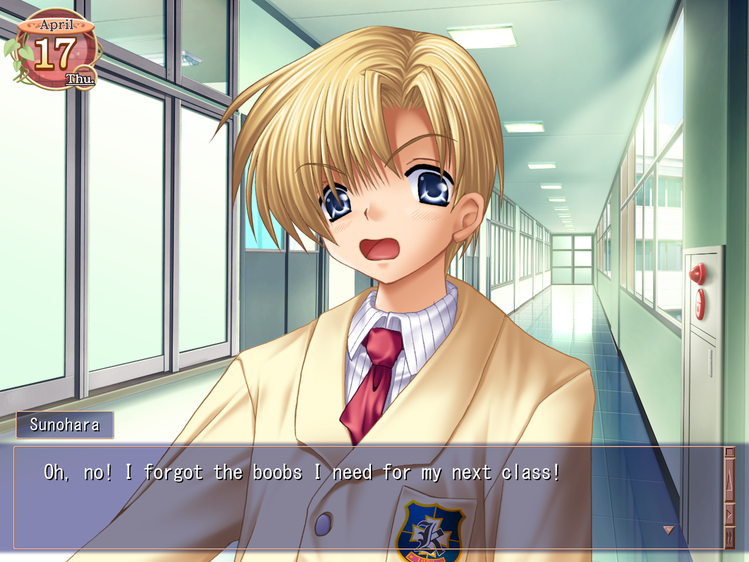 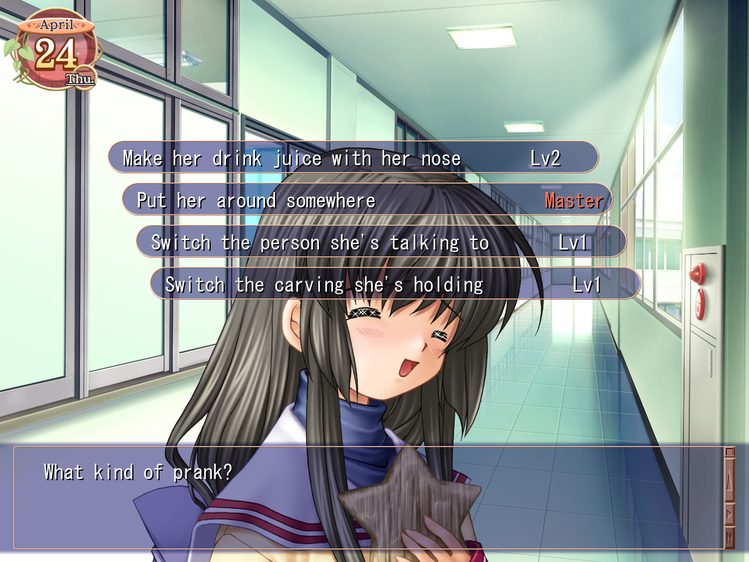 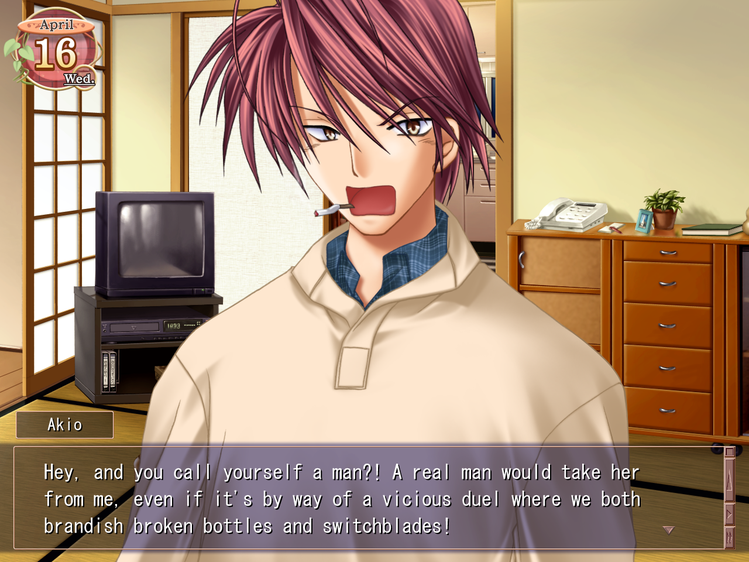 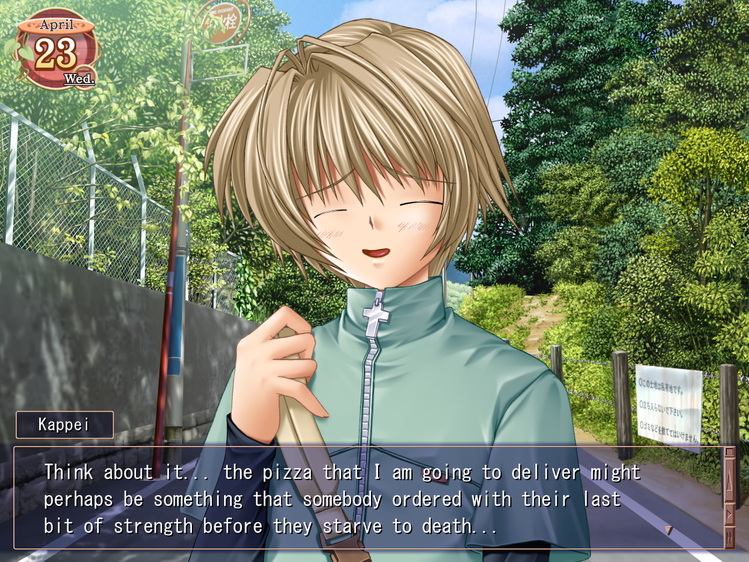 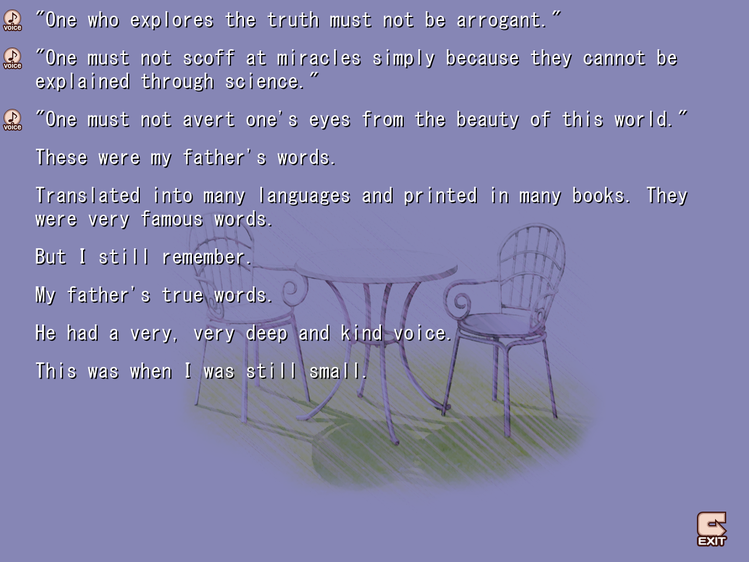 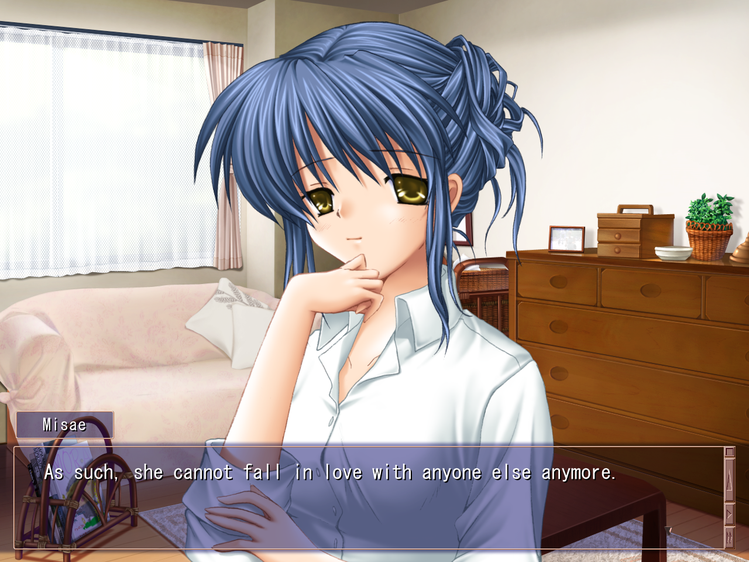 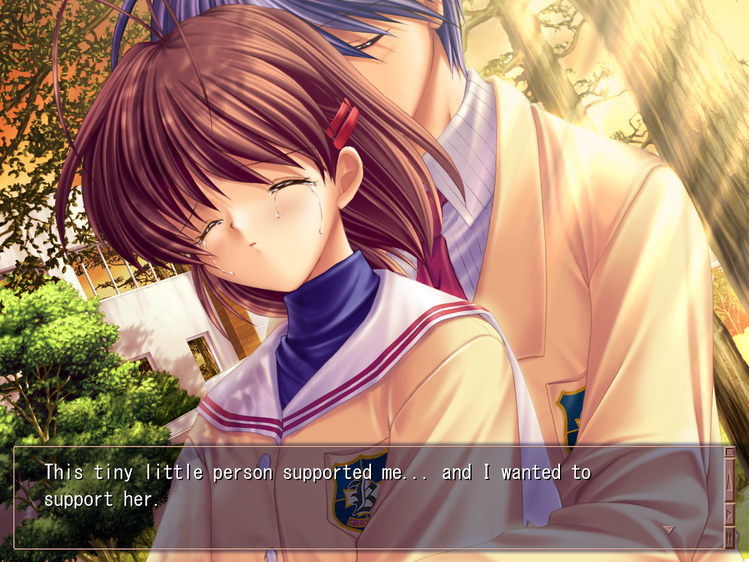 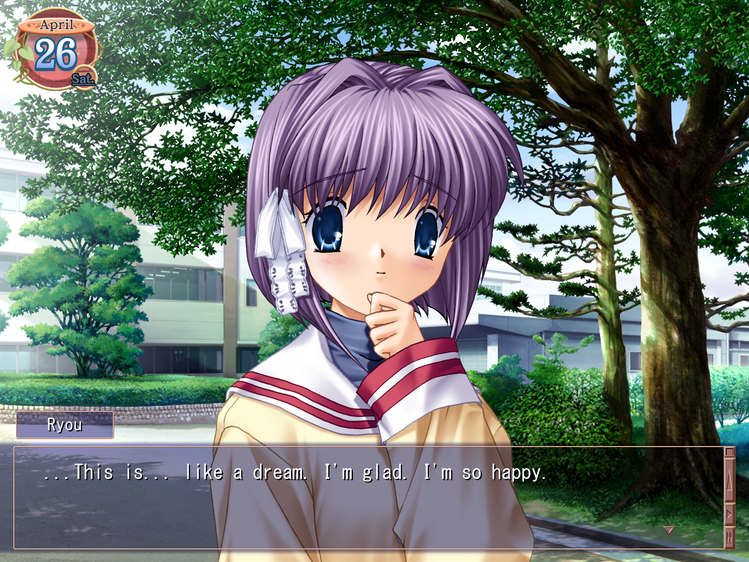 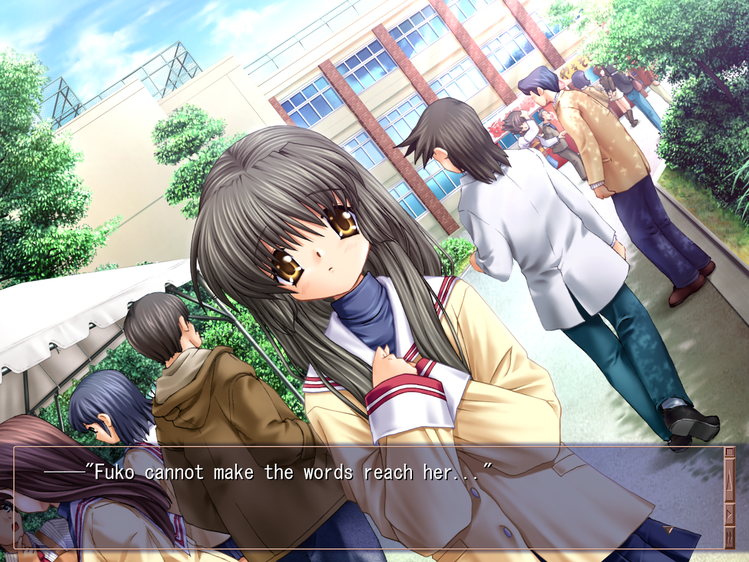 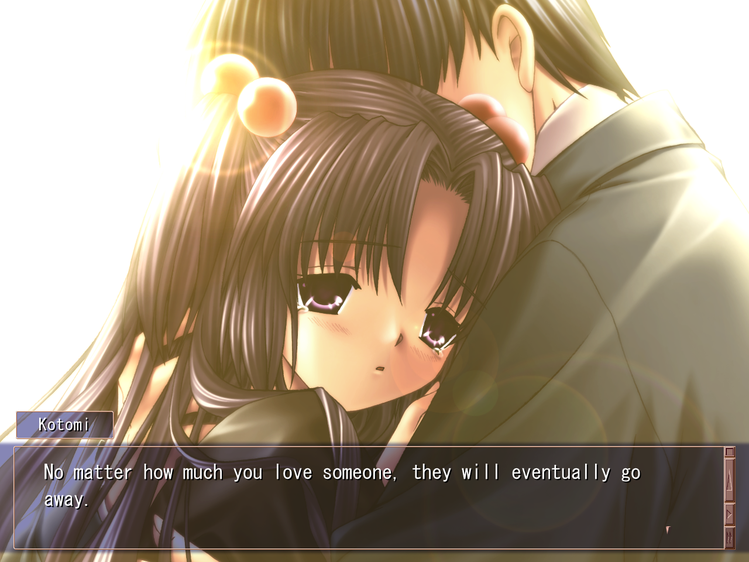 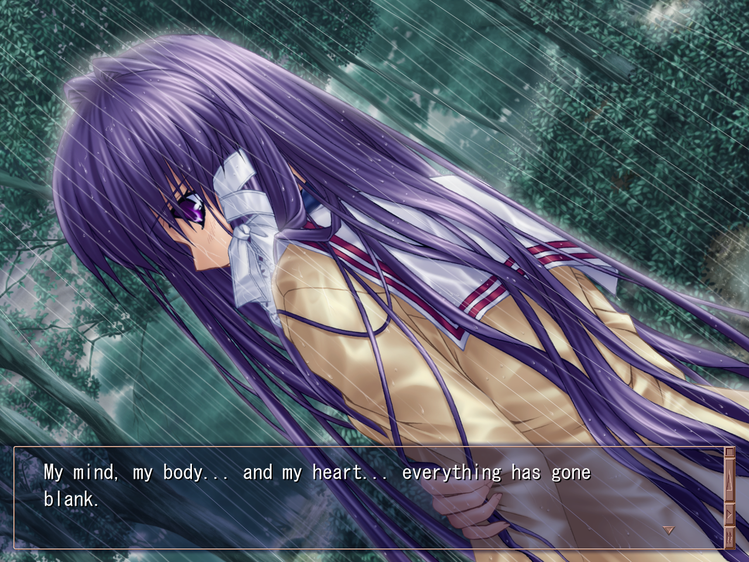 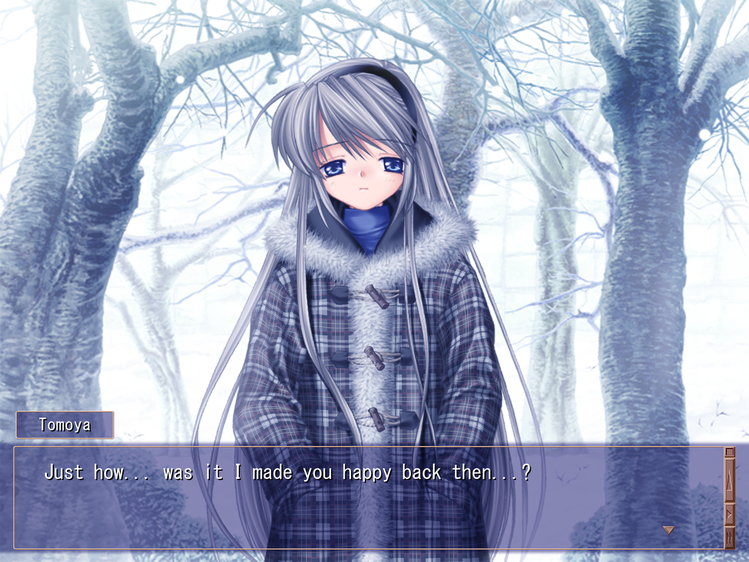 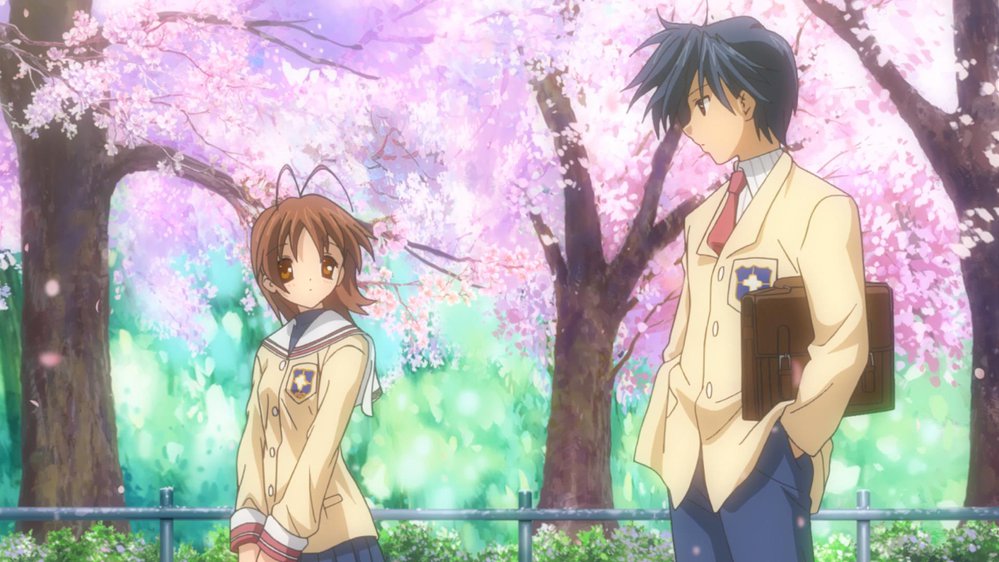 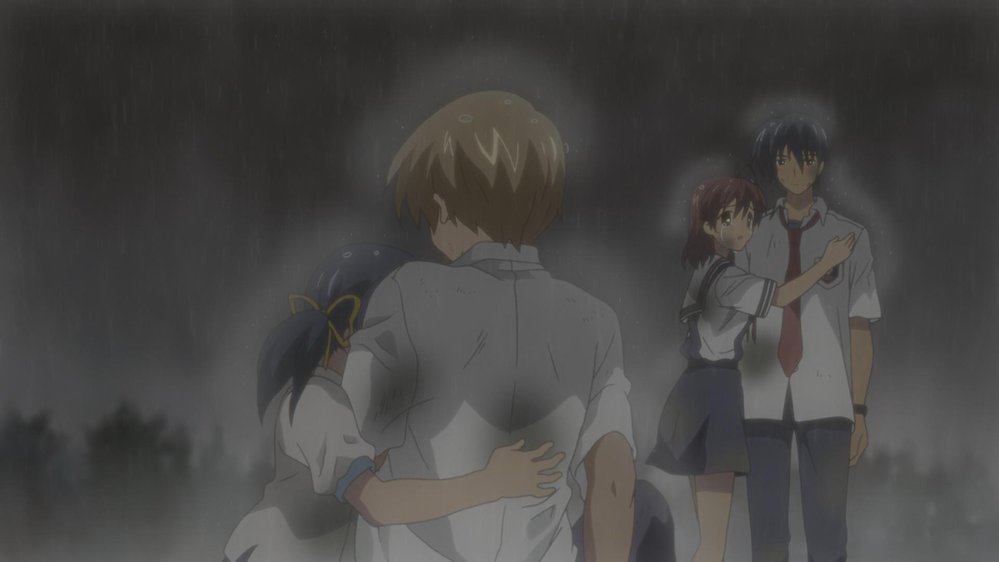 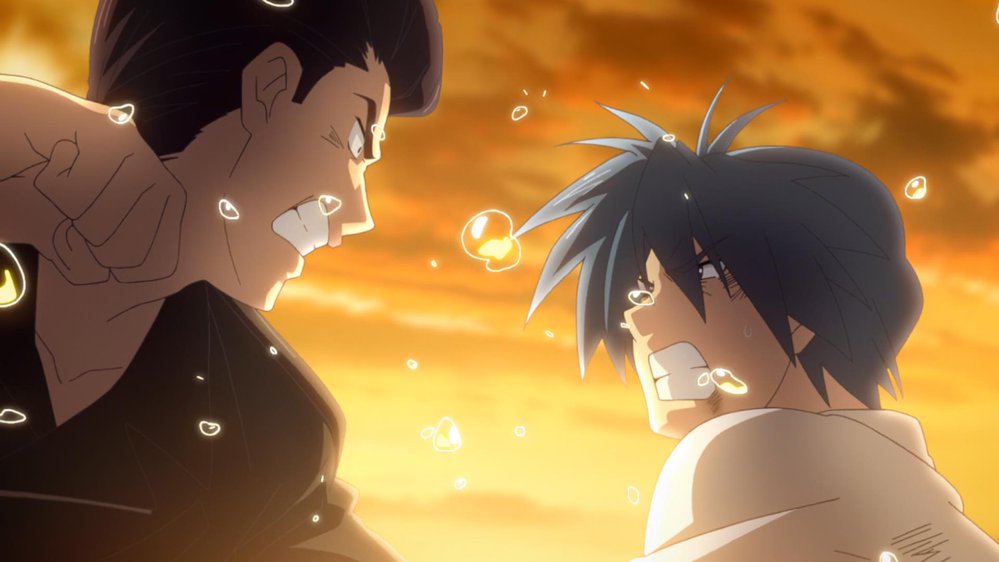 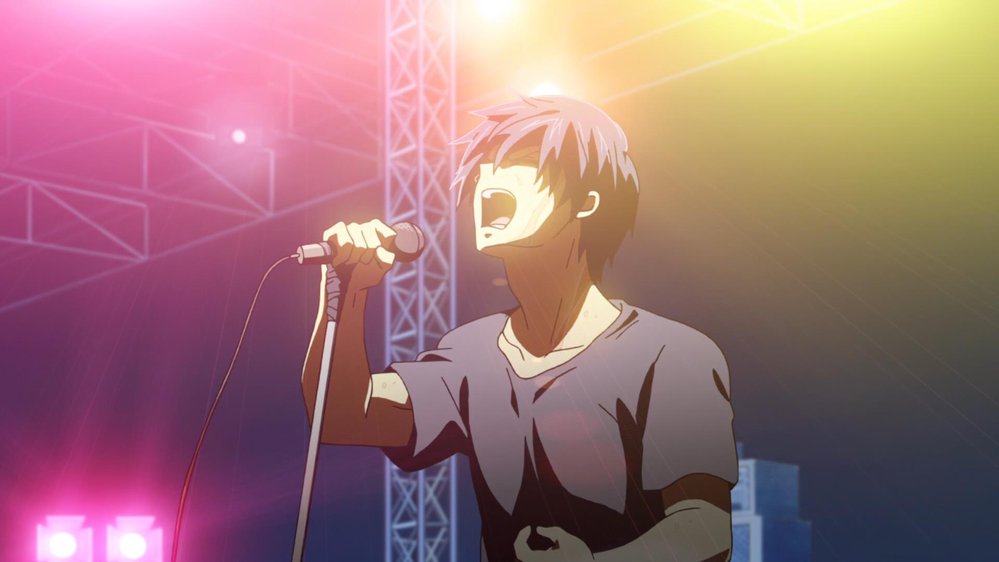 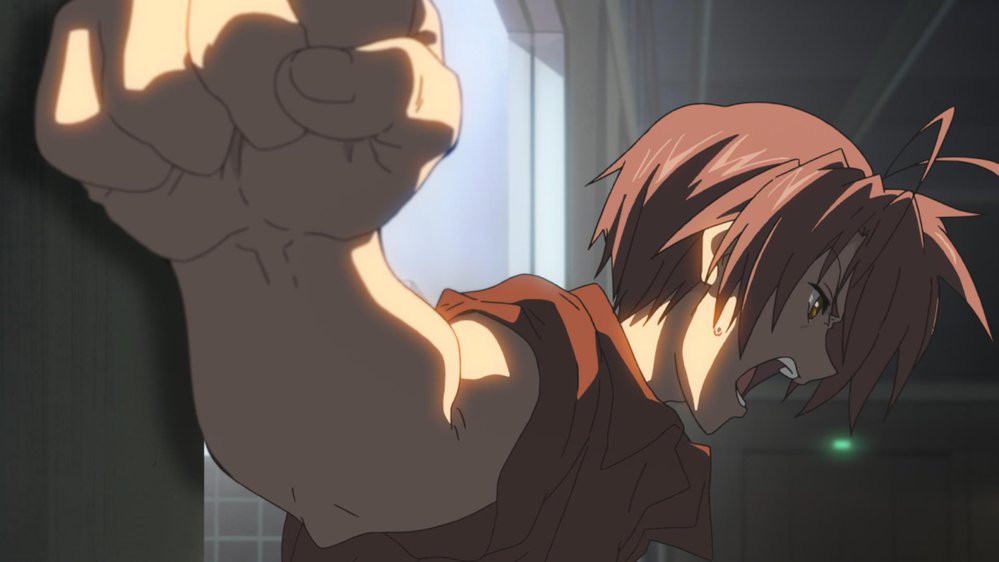 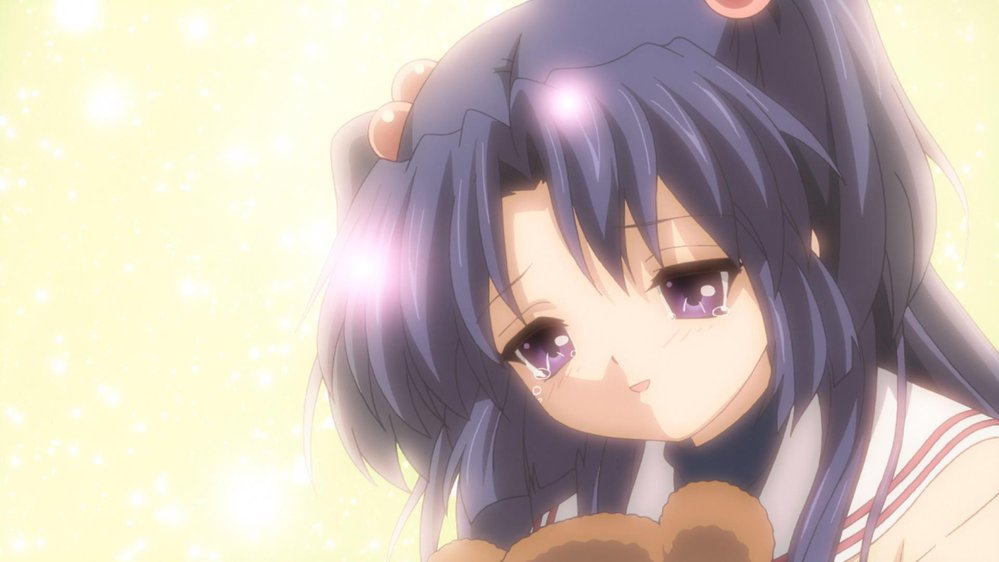 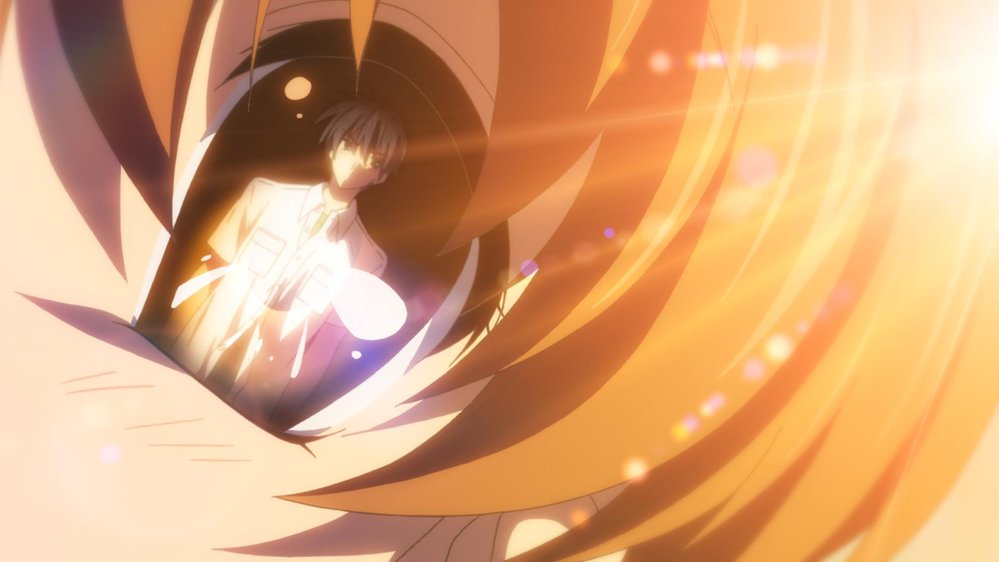 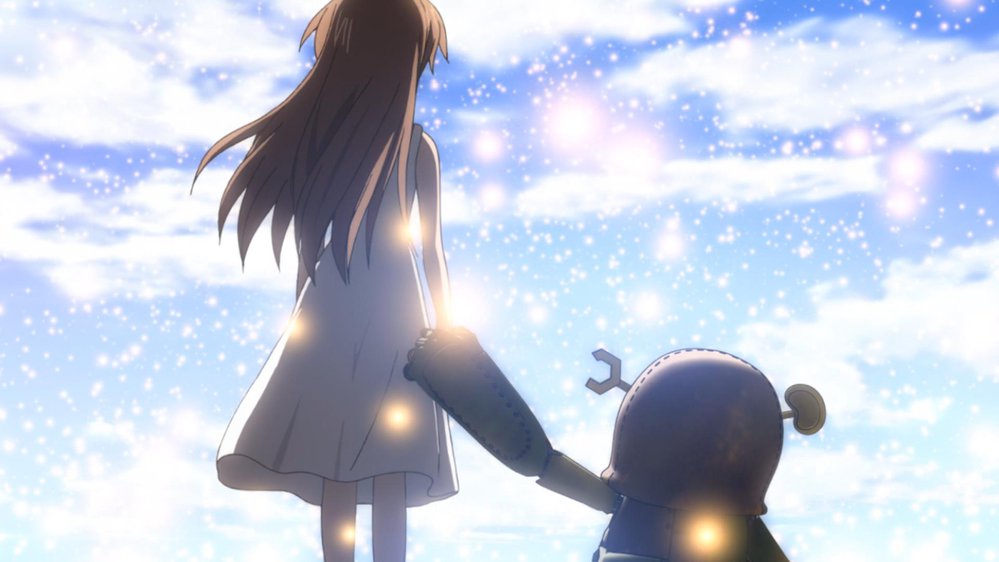