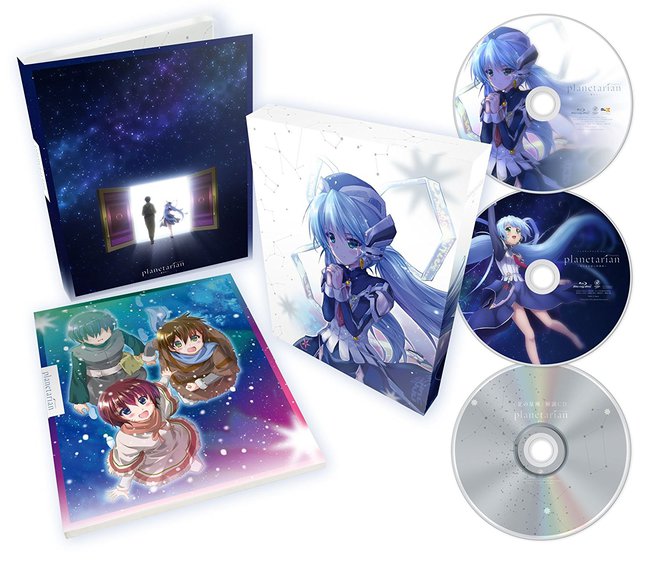 Rejoice! The blu-ray release of the planetarian film, Hoshi no Hito, is now here! It’s been 4 long months since the announcement of the release, and we’ve been eagerly awaiting it; after all, now people who weren’t able to catch it in Japanese cinema will have the chance to experience the continuation of the sad tale of the planetarium.

Not much has changed since the announcement. Up for grabs is a regular release version, for 6800 yen, and a super deluxe version, for 10000 yen, in the beautiful package you see above. More details on the contents of each version in our previous report on this. Here’s hoping you got your pre-orders in early, as the special pre-order bonus seems to have already sold out.

And for those lucky fans who will be in Japan any time until March 5: Gamers in Akihabara will be having a special Planetarian Museum Exhibition, freely open to the public! They’ll be having an entire floor dedicated to planetarian, themed after the Hanabishi department store planetarium. You’ll be able to catch raw scenes from the film on display, along with other rare items.

Furthermore, any 2000 yen spent will net you a free photo bromide of a scene from the movie (with an extra bromide if spent on planetarian goods). And every 3000 yen spent gets you an entry to a lottery with a chance to win a signed copy of the scenario of the movie, panels from the exhibition, or some extra bromides.

Lastly, they’ll also be selling a Super Gorgeous Gamers Limited Edition (nice wording they got there) of Hoshi no Hito for 14000 yen: with a B1 size tapestry. That’s a one meter long tapestry right there! Hope you have space for it~

Great to see the amount of marketing being put into this release! I’m sure it’ll get more people, maybe even people new to the franchise, interested in the world of planetarian.

Many thanks to our translator @Ksellhu for translating info on the exhibit.