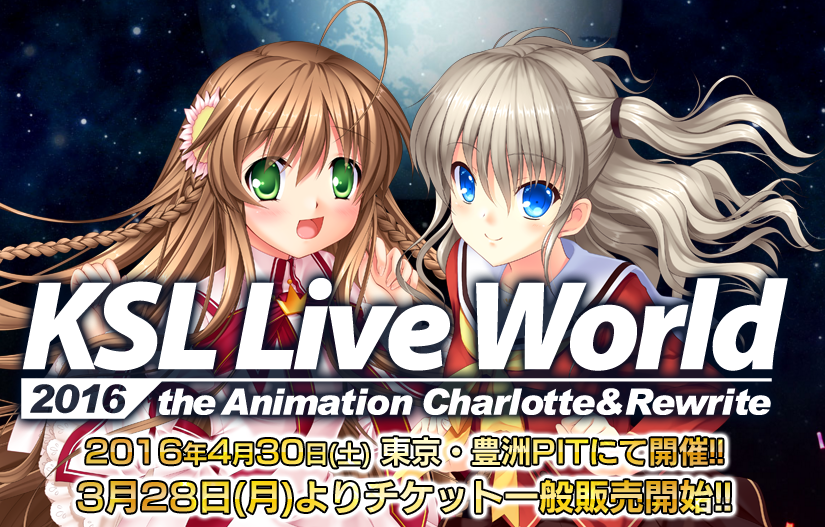 One more month left until the big event, and the past few weeks have brought in some pretty big news for KSL Live 2016. The best of which is that, since the last announcement, they’ve added 3 new artists to the performer list!

The first one they’ve added is a classic: Lia, and I’m sure anyone who knows Key is familiar with her. We can be sure that she will be performing Charlotte’s opening, Bravely You, along with other notable songs in this event.

Next up is Anri Kumaki, an artist who has seen some mainstream appeal over the past years, likely participating to perform the insert song from the final episode of Charlotte, Kimi no Moji.

And last is an unexpected guest: Haruka Shimotsuki. While she has done numerous works for other anime, games and VNs, her Key repertoire is limited to two songs: the ending themes of both Kud Wafter and Harmonia. Will this be all that she will be performing? Or does Key have something else up their sleeve for her that may be related to the theme “KSL Live World 2016: the Animation Charlotte&Rewrite”?

This brings the final performer list of KSL Live 2016 to:


For a whopping total of 8 performers. That’s 2 more than last year’s! While it’s sad to see some notable performers from both Rewrite and Charlotte not making the cut, it’s definitely a sizable cast for an event like this.

UPDATE: VisualArt’s has just posted on their official Facebook page the list of these performers followed by a tagline which states “and MORE!”, subtly implying that there will be even more performers than the ones on this list. Stay tuned!

If you would like to join in, your last chance to buy tickets will start on March 28, 2016 at 18:00 Japan time; less than an hour from the publishing of this article. You can purchase your tickets from peatix, which has an interface friendly enough for fans who can’t understand Japanese, and accepts payment methods from overseas, too! As this is the general sale, you can expect the tickets to sell out fairly quickly. A few of us at Kazamatsuri have already purchased our tickets from the previous lottery sales, so here’s hoping you guys can be lucky enough to join us at this year’s KSL Live World!