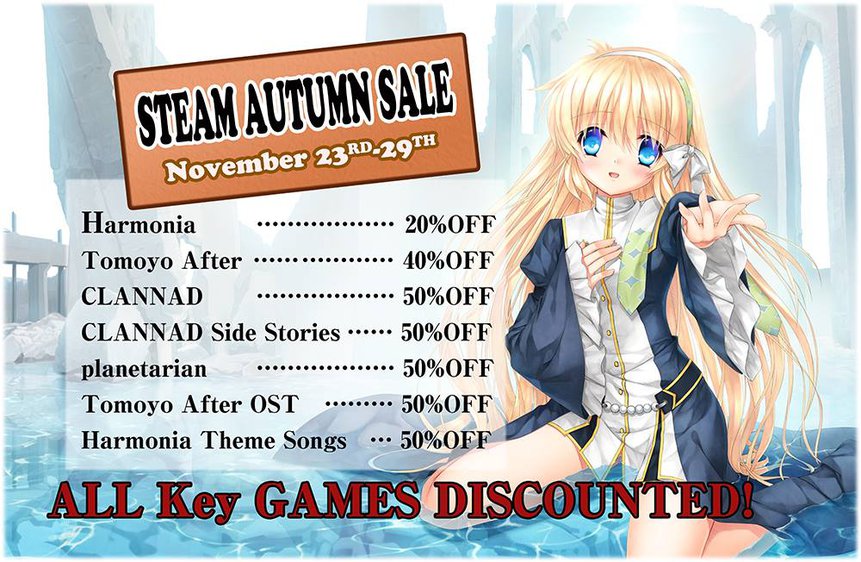 As any PC gamer would know, the Steam Autumn Sale commenced on the 23rd of November, and is running up until the 29th! What this means is heaps of super-discounted titles, and Key’s library are no exception! For the first time you can grab Harmonia at a discounted 20% off, Tomoyo After for 40% off, and the remainder of Key’s library for 50% off! This also includes the recently released Tomoyo After OST and Harmonia OP/ED downloads! Might be a good time buy one of Key’s titles to gift to your friend over Christmas!

But that’s not all, because this Steam Sale introduces something special; The Steam Awards! For this event, Steam users are invited to nominate games they want to win one of a select few categories, one of which being, would you believe it, the “I’m Not Crying, There’s Something In My Eye” Award. Seems like a perfect fit for Key, don’t you think?

If you agree, then we invite you all to join us in nominating CLANNAD for this award! Because let’s face it, CLANNAD has the best chances of all of Key’s titles. To do so, just head on down to CLANNAD’s Steam Page while logged in and give it your nomination! I can’t think of many titles more deserving of such an award than CLANNAD. (Just be thankful Little Busters! isn’t on Steam yet!)

Enjoy your cheap games, and happy one year anniversary to CLANNAD’s Steam release!