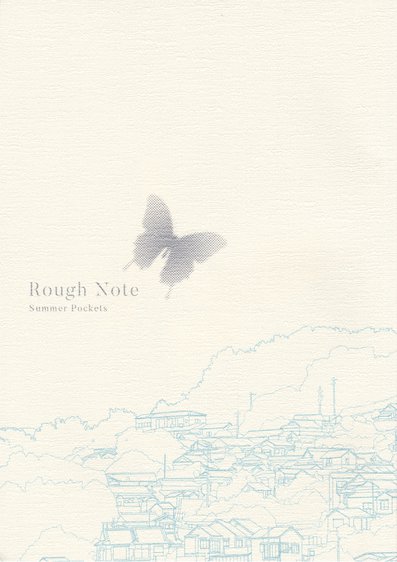 Hungry for more Summer Pockets details? Then read on, because the wonderful Khsellhu has prepared for us a complete English translation of the Summer Pockets Rough Note booklet that was included in the Comiket 91 Key Set! It includes profiles the four main heroines. We’ll be providing images of the booklet below, and translating all the text within. Thanks also to RyuuTamotsu for providing the scans and Yerian for editing the translation! Once you’ve given it a read, be sure to hop on over to our speculation topic to share your thoughts! With that said, enjoy. 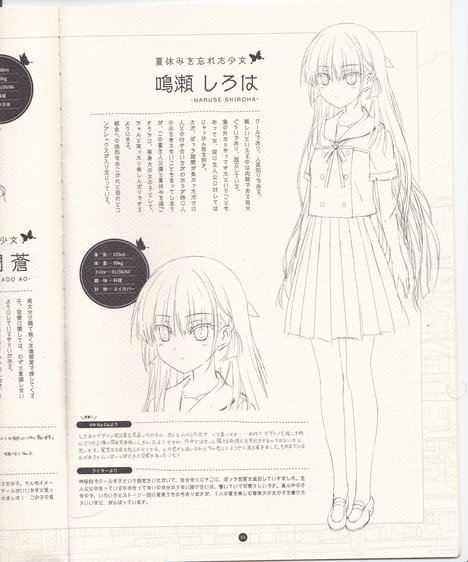 A girl who forgot summer vacation.

A calm and shy girl. She doesn’t have any friends and the only person she is close with is her own grandfather.
She probably lets her guard down with the protagonist because he’s from outside the island.
She was a loner for a bit too long, so she’s somewhat socially awkward. Sometimes she completely ignores other people’s feelings when she talks.
Hopefully, spending time with the other characters this summer will allow her to laugh and have fun with friends as a herself.
She has a strong longing for the city, but her feelings are complex and mixed with fear.

The original design plan for Shiroha said that she has blank eyes…
Eh? It seems like I put extra stress on her fleeting aura, but I think that she will show us different expressions in the story.
I was wondering if a somewhat old-fashioned hairstyle would fit her character, and while I was worrying about it, somehow ended up with the current look.
Before this, people were saying she looked like an old-lady…

I think of Shiroha as a calm, mysterious girl and I’ve decided to make her seem a bit lonely too.
Her conversations with protagonist are strange in that you’re not sure if they’re talking about same things or not, and it’s very sweet to write them.
She’s a central girl in the story and she will have to go through a lot, but I’m doing my best so that she will be able to enjoy her summer as a her true self. 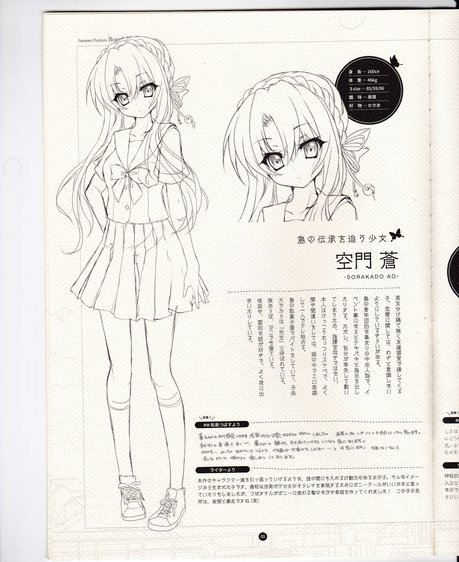 A girl pursuing the legends of the island.

A girl who doesn’t care about genders and talks to everyone like they’re her friend.
She has a tendency to purposefully ignore everything love-related.
Ao acts like one of the core members of a local boy-scouts-like group. She promptly takes command of any situation.
However, because she is also the first to move on the orders she gives, she is not really suited to be in a managerial position.
By the way, she may not seem like it, but she is a closet pervert. Ao frequently mishears words and misinterprets them in a erotic way, only to become bashful herself.
She works part-time at the island’s candy shop, and local kids call her “Teacher”.
If she has the time she can sleep anywhere.
She also really loves ghost stories. She frequently talks about ghosts and goes outside at night.

I’ve got a character description for Ao and designed her to look lively yet cute… I think I’ve tried quite a few styles for her bangs.
I think it would be nice if I could balance the charm of her character with my own vision of her in my head.
Now that I think about it, I picture her with her hair braided in a way that would probably be hard to draw.
I can’t wait to draw more images of her.

At first she looked a bit too energetic and I thought to myself that maybe a ponytail could be a good way to represent her femininity…
Then, what do you know, Tsubasu designed her with a hairstyle that could be changed into a ponytail!
The best points of this girl are her delusions and recklessness (lol). 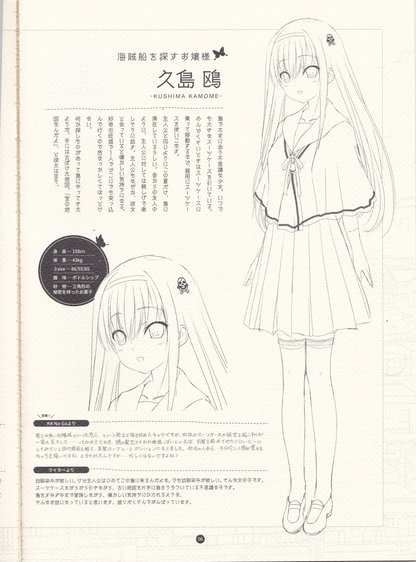 A rich girl searching for a pirate ship.

A mysterious girl who is seen from time to time on the island. She always drags a big suitcase with her.
She uses the suitcase in many clever ways and when it gets annoying, she just rides on top of it.
It seems that, like the protagonist, she came to the island for just this summer.
Kamome chats with the protagonist lighthearted and casually, like he’s an old friend.
For some reason, the protagonist also gets a very nostalgic feeling every time he meets her.
She has a bad habit of meddling with things out of pure curiosity and getting herself in danger, so it’s sort of hard to leave her on her own.
It looks like she came to the island to search for something. In her hands is an old map… “This is a treasure map!” she says.

I started drawing this character with the idea of a wealthy girl with good upbringing… but somehow the most difficult part was adding in her suitcase. Well, let’s not talk about that.
Let’s talk about Kamome’s hairstyle instead. I thought about what was befitting of a rich girl character and tried sketching her with bangs drawn-together, wavy hair, etc., all the while getting a feeling for what she should look like.
In the end I decided on long, straight, black hair.
One of my coworkers commented: “Oh, so this is the rare occasion when you make a character with a big chest?”…It’s not all that rare, right?

I want a childhood friend character… but this is the first time coming to the island. But I want a childhood friend character… and so she became that kind of girl.
A mysterious girl who always drags a suitcase while walking around the island with an old map in her hands.
As I see it, this story is going to be about adventuring all around the island, exploring and being submerged in the feelings of nostalgia.
I am giving it everything I’ve got. 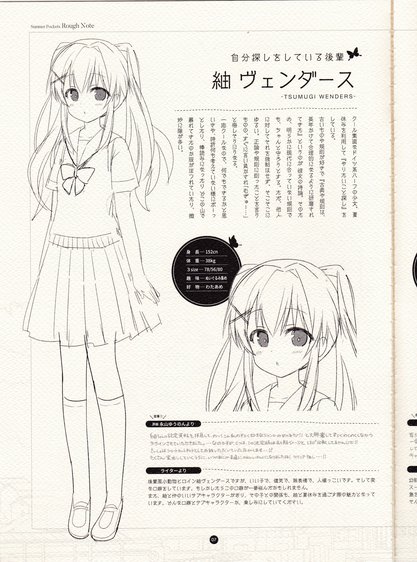 An underclassman girl searching for herself.

A calm and honest half-German girl, she decided to use this summer vacation to, “look for things she wants to do”.
She loves old things and following the rules. Her personal philosophy is, “Classic books and rules were polished over time to be as rational as possible”.
Because of that, she even follows rules that clearly don’t fit modern society. She is a bit lenient though, and doesn’t try to force others to follow those rules.
For someone who always talks about rules and logic, whenever she loses a debate she moans with a mortifying “Mugyu~”.
Even though she is a calm and collected girl and it feels like she can do anything, sometimes she just blankly stares somewhere or starts talking in monotone.
And then there are times when her clothes are frayed like she just rampaged through the mountains.
She unexpectedly has a lot of weak points.

When I saw the notes on Tsumugi’s setting, I was like, “Oh! This is my favourite type of a girl!” and all excited, I started working on her design right away…
But! To tell you the truth, the image that you see here is the complete opposite of the one I did initially!
I think it was requested at first that she would be a short-haired character?
But, as she went through more and more iterations, she somehow ended up cute and honest like she is now! The power of twin-tails!

Tsumugi Wenders, an underclassmen heroine. She’s almost seems like small animal… She’s a good girl, lovable, expressionless, and very affable.
She also has a strange pet phrase. Perhaps that phrase is actually her biggest worry.
There is also a minor character whom Tsumugi is close to and their relationship may be another part of the charm of spending the summer together with Tsumugi.
You’ll find out who this friend is and what pet phrase Tsumugi has later. 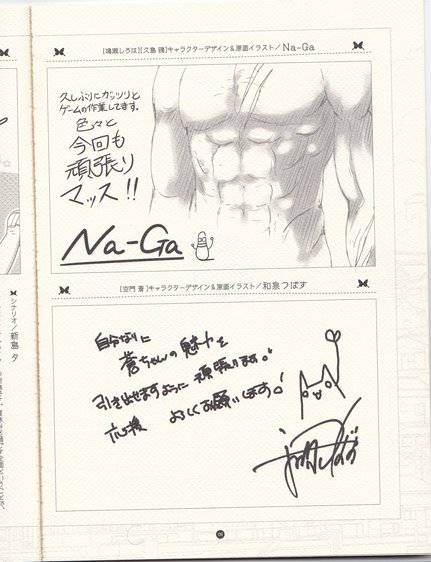 This is the first time in a while I get to fully work on a game.
I will do my best this time as always!!

I will do my best to draw Ao’s charm in my own way.
Thank you for your support! 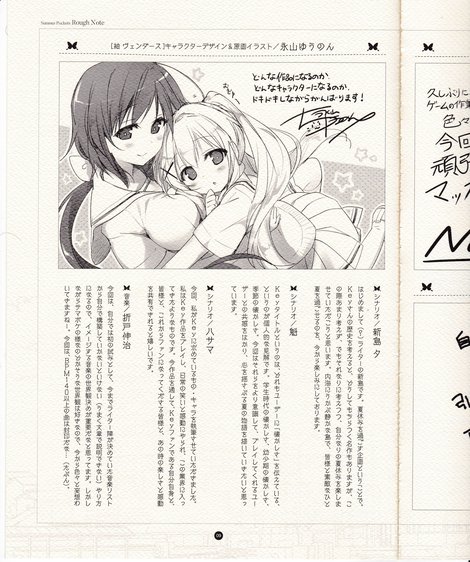 What kind of story will it be?!
What will the characters be like?!
I’m so excited but I’m gonna do my best!

Nice to meet you. My name is Niijima, and I’m a writer. When you think of summer vacation and Key’s previous titles, it’s impossible not to remember that one great work…
But I’ve decided to try not to think about it too much, just keeping it in mind while I enjoy my own summer vacation.
I can’t wait for the day when I will be able to spend a great summer with everyone on a quiet island in the Inner Sea.

This time, I am getting what I’ve always wanted from Key, I’m getting to write a character.
To be honest, I kinda entered this industry largely in part because of how deeply touched I was by the everyday comedy and emotions of Key’s works.
As a big fan of Key myself, I want to share the joy I felt back then through this work with all current Key-lovers, and all those yet to become Key fans.

This time, I’m having to create the music based on a list that the writers made for me (it’s hard to explain).
I believe that deciding how the game world is going to be represented by my music is very important, and I’ve set that as my main priority.
Still, I really love the peaceful feeling I’m getting from Summer Pockets. I will probably get all sorts of ideas from that now.
I will have to forget about songs with BPM over 140 though… (probably).