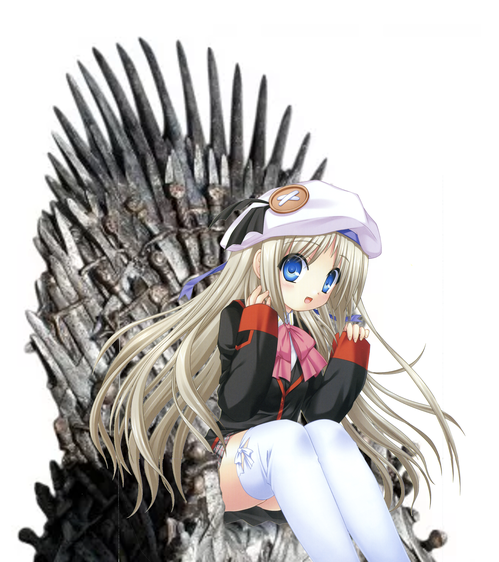 My children, have you ever heard the stories about the Kud Life Supporter? Of course you haven’t, but this shit is bonkers! So the Kud Wafter crowdfund finally ended with over 78 million yen gathered, but we’re not gonna talk about what happened. Rather, we’re gonna talk about what could have happened but didn’t.

At the start of September, the final month of the campaign, VisualArt’s added an absolutely ridiculous pledge called “Course Z: Kud Life Support Set.” It was a pledge for 10 million yen with five insane rewards attached. Even if no one bought it, the fact that VA were willing to make this is commendable, so that’s why we’ll be talking about all the rewards today.

#1 Kud Oilpainting -Art that will stand the test of time-

With a design drawn by Na-Ga and painted by a professional oil painter, this piece would have been 116,7x90,9 cm. “By simply hanging it on your wall, the room becomes more sophisticated.” Christ VA, this is the least silly one, and it already sounds like an April Fools joke.

So obviously the Tevua republic doesn’t exist, but it was modeled after Fiji and Kiribati, so VA were going to send two people there on a week long tour. Afterwards, they would also receive a photo album which combined pictures from the tour with images of Kud. This is definitely the reward I’d want the most because it’s a cool vacation. If you have enough money to throw on this pledge though, you’ve probably gone on a couple tropical vacations already.

Back in 2010, VA used Orito Shinji’s personal car and toured Japan to promote Kud Wafter. So to one-up that, VA would reward a brand new Honda Fit decked out with Kud pictures and filled with Key goods. It would also come with a navigation system voiced by Wakabayashi Naomi. This is when you start questioning if this pledge would have VA going plus or minus…

One card to rule them all that gives the holder right to anything released under the Key brand as well as tickets for KSL events for the next 10 years. This is not including event items and limited stuff. This one is like, it sounds good on paper, but it’s kinda the worst one in practice. First of all, Key needs to stay afloat for another 10 years for it to get full value.

Even with my opinions of Kud and her spin-off, I would’ve loved for these items to exist. Either for someone of my ilk to throw all of it off a cliff or for someone to fully dedicate to the Wafuu life style. It would amuse me immensely if some Bruce Wayne copy made a shrine around the statue and lined up the itasha alongside his Ferraris. As I already said, if you can pay for this pledge, you probably don’t need the vacation, and the “credit card” is completely superfluous. VA even made fun of it themselves that an oil painting will make your home fancier just by simply being a painting. If you’re gonna take anything away from this, let it be that VA are a bunch of cool and funny dudes. I assume we’re never gonna know what everyone where thinking when this idea came to be, but it should definitely be remembered as one hilarious “what if” story.