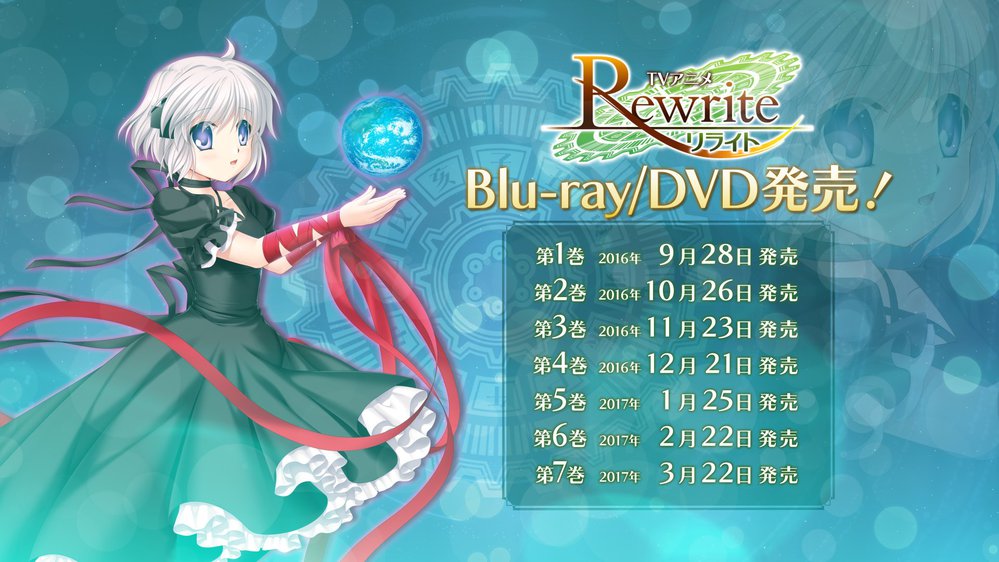 This news ended up turning up a lot sooner than anticipated! Featured today at the Rewrite Anime talk-show event, details regarding Rewrite’s DVD and Blu-Ray releases were unveiled. As you can see, 7 Blu-Rays have been announced. The Rewrite Anime website has been updated with details of these releases, confirming that Volume 1 will contain the 1-hour Premiere Episode, while volumes 2 through 7 will contain 2 episodes each, for a total of 13 episodes.

Now, before anyone starts jumping to conclusions, keep in mind that nowhere was it stated that these seven volumes form the totality of the Rewrite anime. It’s my hope that Rewrite will be a split-cour anime, with these first 7 volumes comprising the first cour, and a second cour to be announced at the conclusion of episode 13. All we can state with certainty is that the Rewrite anime will have at least 13 episodes. Anything beyond that is pure speculation. 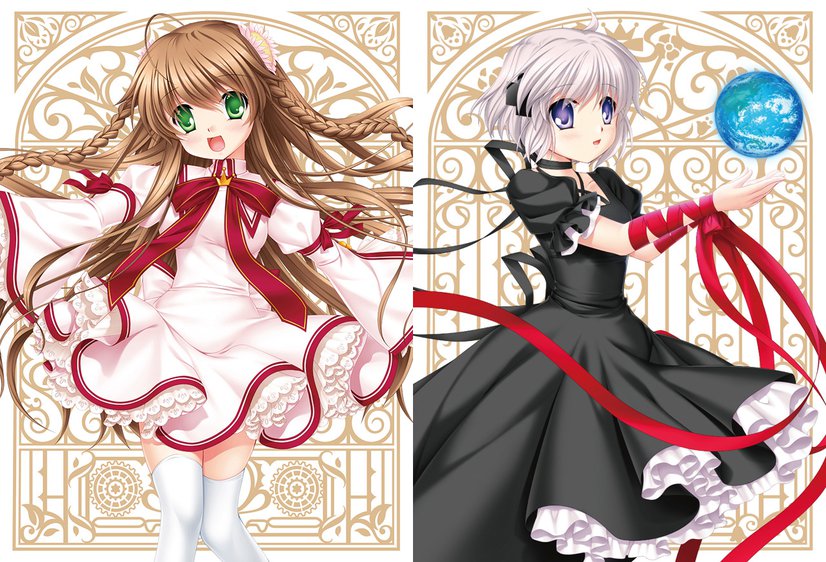 The first volume of the Blu-Ray is scheduled to release on the 28th of September for 7,000円 (6,000円 for DVD), with a new volume released each month at the same price. Each release comes with a bonus CD of unknown extras, and feature cover art by Itaru Hinoue, the first two of which are available to view above. Animate, Sofmap and Gamers already have pre-order bonuses announced for the releases, including rubber straps and a tapestry depending on who you order through. It’s also been revealed that Ryukishi07 will be producing some kind of game to be included with Volume 4. It remains to be seen what this might be, but it should provide some incentive for people to collect these releases. Don’t expect anything big; since Ryukishi07 is at the helm, it’ll likely be some kind of mini visual novel, something like ’Mio Nishizono’s Closed Room Murder Case’ that was included in the Little Busters! Refrain Blu-Rays.

The talk show also featured the announcement that Rewrite’s official cast radio show, ‘The Monthly Terra’ (no not our one) will be making a return! The first broadcast is scheduled for the 3rd of July, with new broadcasts to follow each week. Something our readers with a keen ear for Japanese will no doubt look forward to!

If you want to catch the pre-screening talk show, forum member Shcboomer has recorded the whole thing. By now, a select few lucky people in Japan will have already finished watching the first episode of Rewrite at the event. But don’t worry, we won’t have to wait long until the first episode debuts on the 2nd of July, only one more week from now! For a little sneak peak, director Tensho tweeted a photo of Kotarou’s pretty face which you can see here. We’ll keep you updated as soon as international simulcasting options are announced.

If you’d like, feel free to join us in speculating about this release on the forum. We’re having a fun time clarifying details and easing the spread of misinformation, but there’s a lot of productive talk going on about how we’d like to see a 13 episode Rewrite pan out. While a final episode count remains to be seen, there’s no harm in speculating in any case.

The wait is almost over!