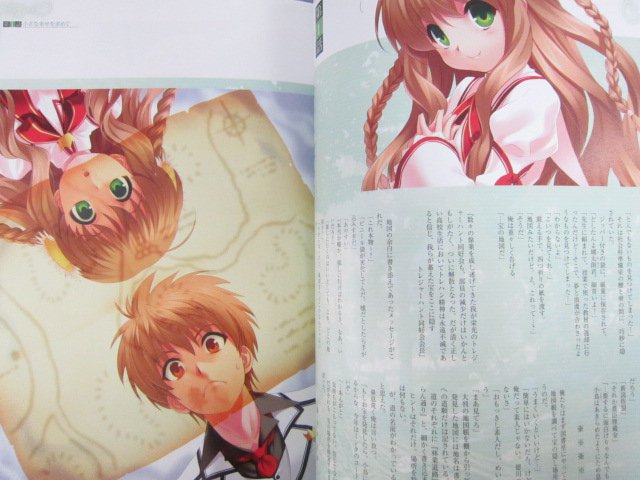 Here’s some perfect timing, what with the Rewrite anime now currently being broadcasted! ShiraneHito, who you may have seen around YouTube sharing their translation of Key songs, has announced that they are now currently translating the Official Another Story Rewrite book!

For those who aren’t familiar, Official Another Story Rewrite is a collection of short stories of some additional stories not shown in the VN, involving the characters from the Rewrite world. All the stories are written by either of the main authors of Rewrite, namely, Romeo Tanaka, Yuto Tonokawa, or Ryukishi07. Along with these stories are some beautiful illustrations provided by ZEN, a sample of which can be seen in the image above.

We did mention that the fan translation is currently underway, and that’s because both Chapter 1 and Chapter 2 have been made available on ShiraneHito’s blog, for your reading pleasure. Be warned, however! Many of these chapters reference late-story information from the VN, so we suggest not checking these out unless you’ve read the VN.

While the blog does not come with the accompanying artwork, the book itself is easy enough to get off of Amazon Japan which, thankfully, ships this internationally. There are 9 chapters in total, so we hope you join us in reading and waiting for the rest of the chapters’ translation, thanks again to ShiraneHito.