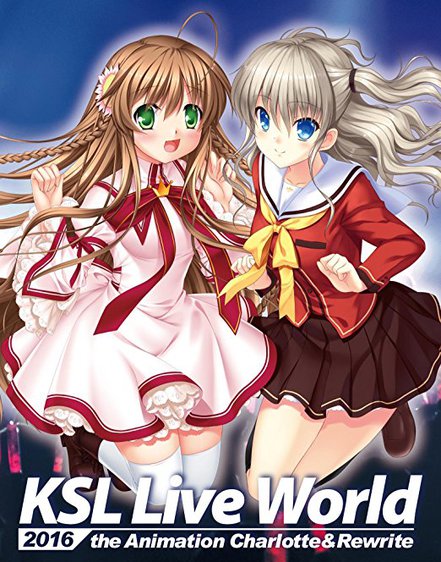 It’s been a long wait, but now it’s finally here. After years of no new releases, we finally have a new KSL Live World recorded and released on disc; and on Blu-ray, no less! That’s right, the KSL Live World 2016 Blu-ray is out today, March 29, and lets everyone in Japan and around the world witness this great experience for themselves.

KSL Live World happened last year, on April 30, 2016, and was titled “the Animation Charlotte&Rewrite” in celebration of the respective anime airings from 2015 and 2016. As such, this live features most notably songs from both Charlotte and Rewrite, but of course not just limited to those series. The live stars mainstays such as Kitazawa Ayaka, marina, Lia, Tada Aoi, and even KSL Live newbies like Anri Kumaki, Haruka Shimotsuki, and Psychic Lover! More info on the tracklist and details can be found on their official website. Having been to the live last year together with fellow Kazamatsuri members, I can say that this was definitely a concert you don’t wanna miss. While being there live is an irreplaceable experience, watching it on Blu-ray should be just as enjoyable.

You can pick up the Blu-ray on CD Japan or on Amazon Japan. And if you are getting it (or have already received it) let us know! Maybe you might even find some familiar faces in the audience.