With comiket having just finished in Japan, and the hype surrounding the Rewrite having died down a bit, one piece of news has gone under the radar the past few days: the announcement of KSL Live World 2016 the Animation Charlotte&Rewrite. The event had been announced in volume 32 of the visualstyle magazine, a magazine distributed every year for customers at the VisualArt’s booth in comiket, and subsequently, the official website had been published. 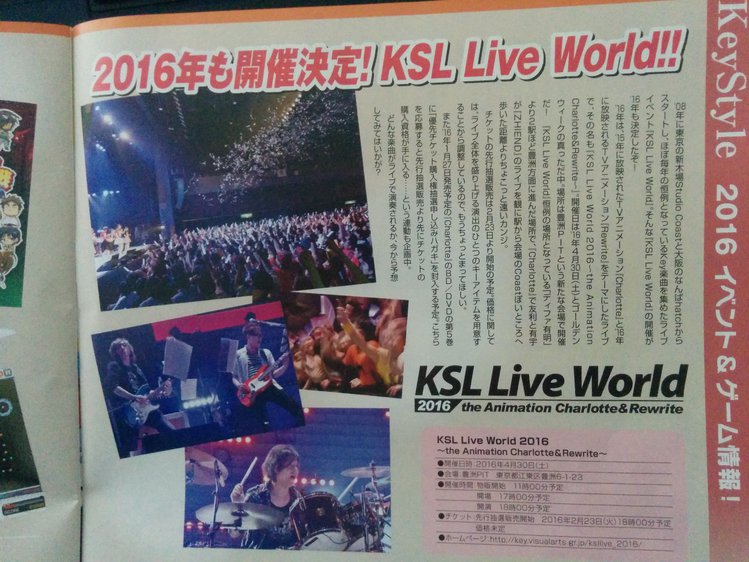 Announcement of KSL Live World 2016 in the visualstyle magazine, including all the details

While the website is pretty empty at the moment, all the necessary info has been revealed in the visualstyle magazine. The event will be held on April 30, 2016, at Toyosu PIT, a fairly popular concert hall in the Tokyo area only a few kilometers away from last year’s KSL Live World venue and Tokyo Big Sight. As with all concerts, there will be goods sold at the venue, starting from 11am. The concert will start at 6pm sharp, and people will be let into the venue starting 5pm.

For those of you interested in coming over to Japan for the event, the lottery for purchasing tickets starts on February 23, 2016 at 6pm. No details have been given yet as to where you can put in a lottery entry, but the website will be surely updated with details soon! And if you aren’t thinking about going, perhaps our special coverage of last year’s event will change your mind!

Pretty obvious from the title, but this year’s KSL Live World is going to be all about Charlotte and Rewrite, in celebration of the airing of the anime of the two series. With that, I am guessing we can expect performances from big names of both series such as Maaya Uchida, marina, Yanagi Nagi, and especially Tada Aoi, who has performed songs for both series. Any thoughts on the upcoming event? Who else would you like to see perform for this concert, and which songs would you want to be performed? Feel free to discuss below~