2018 will be an awesome time for Key fans, as the company will be celebrating their 20th anniversary! In commemoration of this, VisualArt’s have announced that they will be holding an orchestral concert.

According to promotional materials by Aim Village, Inc. – the concert’s organizer – Key Orchestra Concert 2018 will feature soundtracks from Key’s visual novels since their founding in 1998, particularly Kanon, Air, Clannad, Planetarian, Little Busters!, Angel Beats!, and Rewrite. Quite a trip down the memory lane, no? 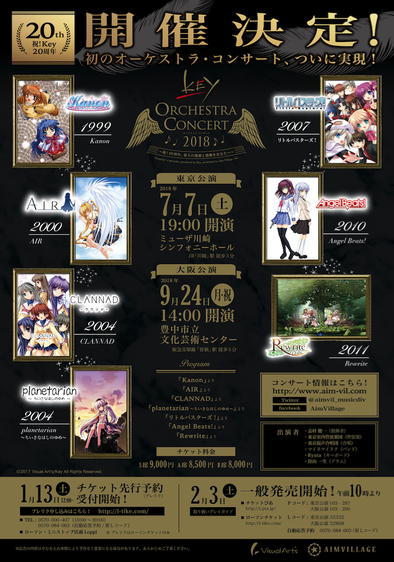 Confirmed to be performing these wonderful soundtracks will be Tokyo Chamber Orchestra, led by their resident conductor Kenichi Shimura, along with Tokyo Philharmonic Chorus, alternative pop band Meine Meinung, drumset accompanist Issei Machiyama, and keyboardist Ryuta. There will also be guest performers, which will be announced on a later date.

The concert will be held in Muza Kawasaki Symphony Hall, Tokyo on July 7 at 7:00 PM, and in Toyonaka Performing Arts Center, Osaka on September 24 at 2:00 PM. Gates will be open by 6:15 PM and 1:30 PM, respectively, for those who would like to come early and check out the program notes.

Tickets for these events will be available in Lawson and Ticket Pia starting February 3, but you can pre-order from Lawson from January 13 to 21. Ticket prices is at three levels: 8,000 yen for B seat, 8,500 yen for A seat, and 9,000 yen for S seat.

Would you guys be interested in a Kazamatsuri meetup for this event? Which tracks do you think will be featured in this concert? And who will perhaps be the guest performers? Share your thoughts in the discussion below! 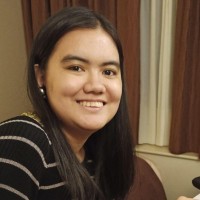