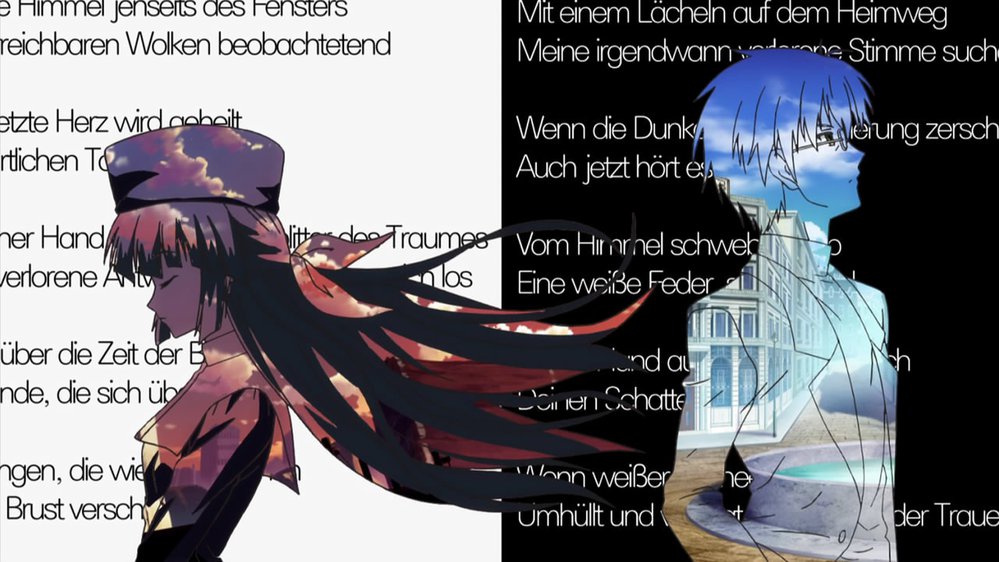 At Kazamatsuri, we usually spend a lot of time talking about Key’s series’. But it just so happens that there’s a diverse range of anime that weren’t made by Key! Who knew! The Kazamatsuri community has recently been busy compiling nominations and casting votes on some non-Key anime series that mean something to us. The votes have been tallied, and today I am happy to present to you: Kazamatsuri’s 11 Favourite Non-Key Anime! It was gonna be 10 but there was a tie. Let’s start from the bottom!

“While I have yet to fully experience the visual novel, this series continues to hold a very special place in my heart, perhaps even overtaking Key’s own anime for me. It’s a tragic yet beautiful tale of young love, and the many twisted complications that serve as obstacles to achieving happiness. The cinematography is (in my opinion) Shaft’s master work, as it provides deep insight into the characters emotions, and brings their words to life in ways that only animation can accomplish. It makes full use of the artistic potential of the anime medium more than any other anime I’ve ever seen. It’s full of mystery and intrigue, the characters are all unique and full of depth (including the men), and the drama is enough to break you, before piecing you back together at the end with something you didn’t have before going in. It’s a lot like Key, but much more raw and untamed, dealing with very serious and adult issues in very elegant ways. It continues to be one of the biggest artistic influences in my life, and I hope more people can come to experience it and appreciate it as much as I do. It’s probably the most beautiful anime I’ve ever seen, inside and out.” 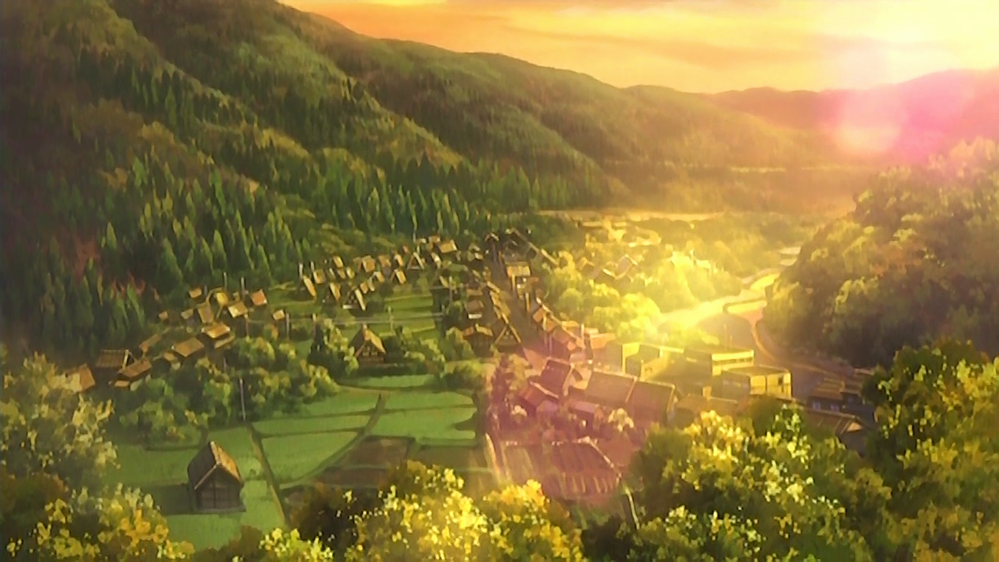 “Higurashi is hands down one of my favorite anime series of all time. Pysch-thrillers have a special place in my heart and Higurashi moved in and took up residence there. It’s the story of large town boy moves into small town life, and finds that the world is a little different this far removed from civilization. Higurashi excels at creating tense atmospheres with realistic scenarios. What do you do when you have no one to trust, and your friends turn out to not be who you thought they were? The series itself is broken up into two arcs with multiple chapters in each one. The arcs are basically the question arc followed by the answer arc so if you have no idea what is happening for most of the first season; don’t worry you’re not supposed to. As an aside if you are going to watch the anime skip the first five minutes or so of the first episode it will make you appreciate it that much more.” 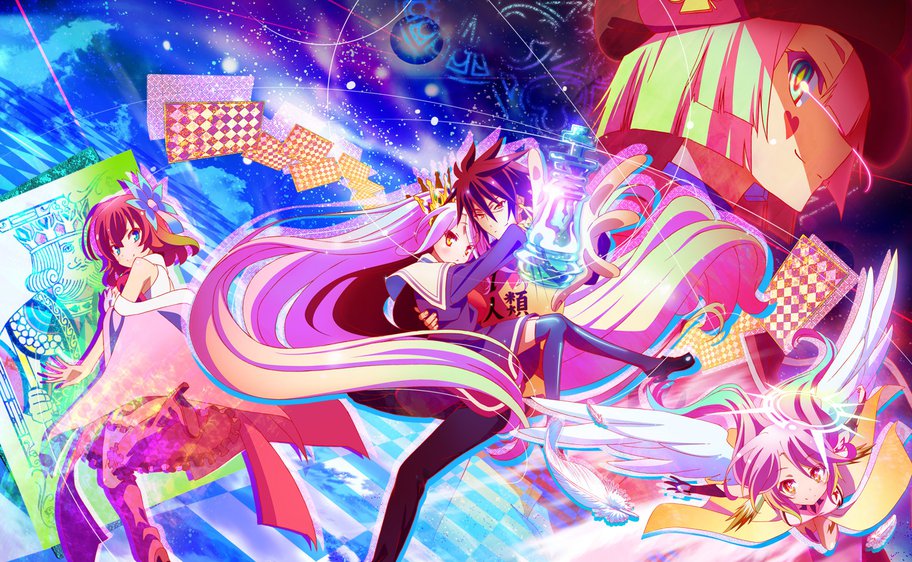 “From beginning to end, this show is an absolute blast to watch. It focuses on a pair of NEET siblings who are masters of every game they’ve ever played. In MMORPGs, they’re known simply as “Kuuhaku” (Blank), and their combined skill is the stuff of legends. One day, they receive a mysterious email that ultimately leads them to being sucked into the world of “Disboard,” a place where games are a normal part of everyday life. The art for this series (as seen above) is super colorful and vibrant, which really enhances the fantasy world that the siblings have found themselves in. As for the games they play, it’s incredibly fun to watch “Kuuhaku” work together and win games that, to a normal person, would seem nearly impossible. Add in a cast full of quirky, interesting characters, a decent (but not over the top) helping of fanservice, and a gorgeous OP and ED, and you’ve got one of the most consistently entertaining shows in recent years.” 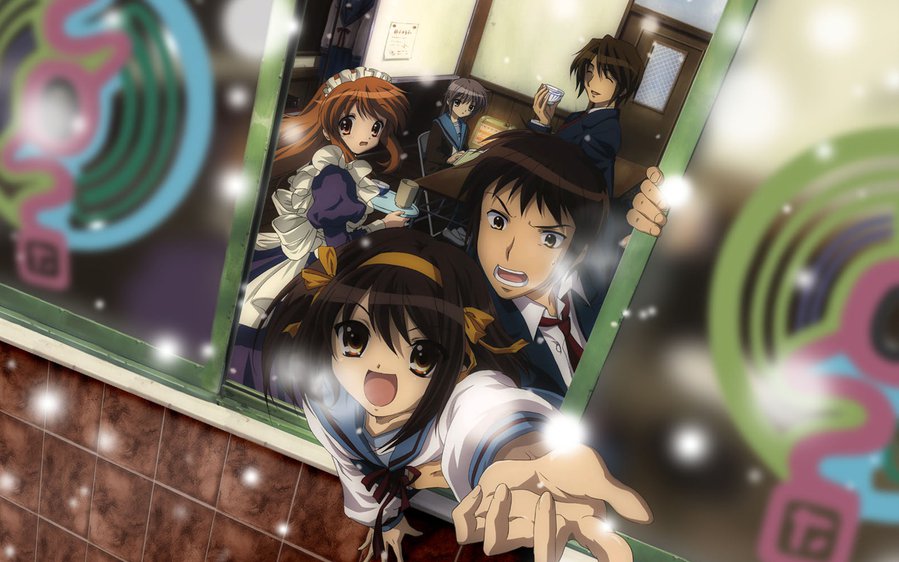 8: The Melancholy of Haruhi Suzumiya

“Do you remember the part of your childhood when you stopped believing in Santa Claus, but still believed in the supernatural? The days when you wished that superheroes, espers, time travelers, aliens, and the like would enter your boring everyday life and take you along on a journey of adventure? What if, long after you had given up on those childish dreams and accepted reality, a capricious, selfish, unstoppable, and absolutely charming girl would forcefully drag you along while pursuing the supernatural that is happening all around her? How would you react if supernatural beings and events started crash-landing on your everyday life? This is a must-see anime with an engaging story, wonderful characters, brilliant comedy and beautiful art that will make you remember your childish fantasies and allow you to dream once again.” 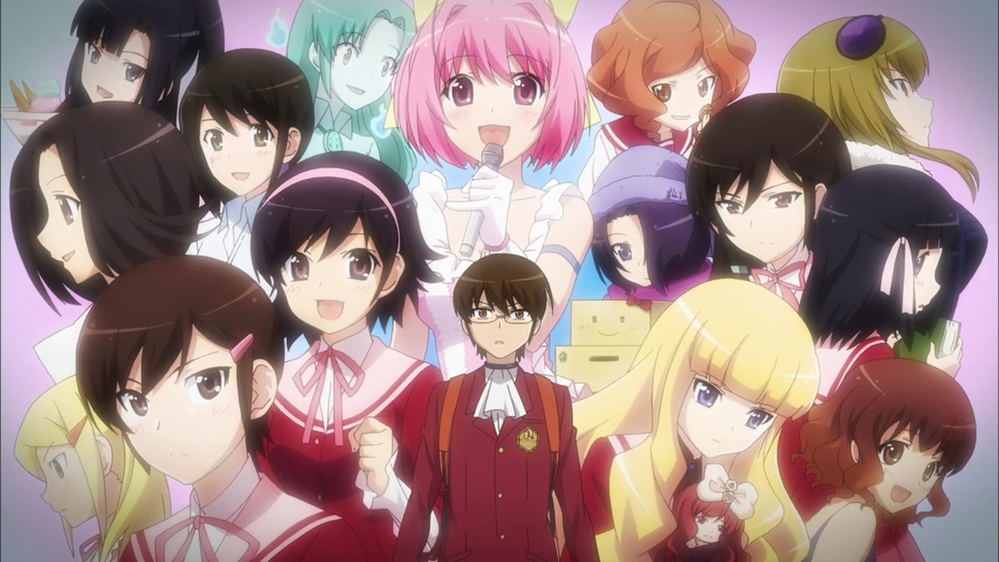 7: The World God Only Knows

“The World God Only Knows aired at the perfect time. In a world of romance, drama, harem, and idol anime, TWGOK was a refreshing experience. There are three seasons, each one better than the last. Keima Katsuragi, a famous VN/Dating Sim reader known as the “God of Conquest” is tricked into a life-or-death battle against runaway spirits from Hell. These spirits hide inside the emptiness in people’s hearts, and can only be revealed by filling that emptiness. God of Conquest coming through! Now forced into accepting reality and being given responsibility, Keima must use his Dating Sim knowledge to capture the hearts of girls, and deal with the drama that reality brings. As the seasons progress, so do the conflicts, and so does Keima. If you aren’t that interested by the above synopsis, don’t worry, it just gets better and better.” 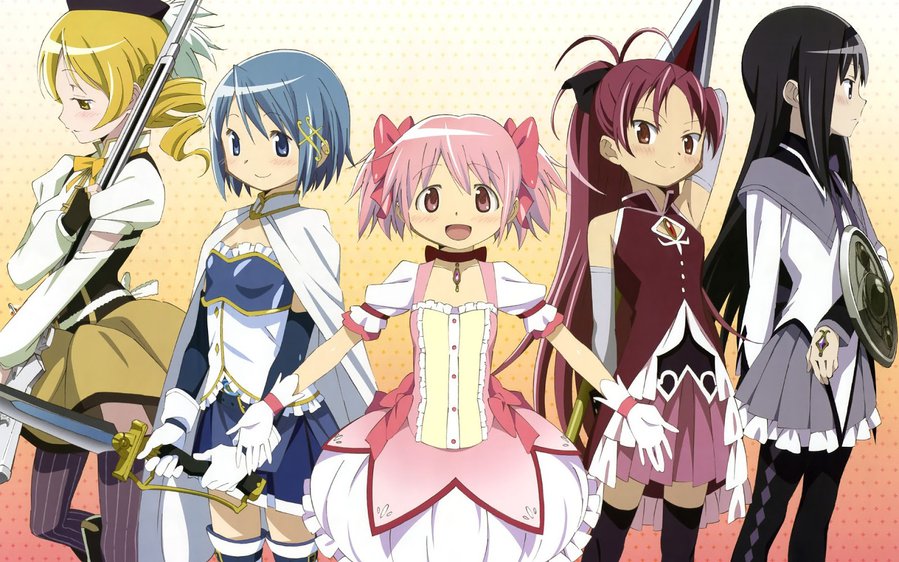 “Madoka Magica isn’t your typical magical girl anime as many of you know. I’ll leave spoilers out, but for the first couple of episodes I just felt like it was just some cutesy girl anime with cute girls doing cute things while also fighting monsters, cutely.

man was i wrong

The series does a complete 180 and gets you hooked, but it was by Gen Urobuchi himself, so of course. For a 12 episode anime it’s really good, and the classic SHAFT animation works well. The battle scenes looked amazing and I really felt for the characters.

And it doesn’t just stop there! They made 3 movies, with the first 2 being recaps, and the 3rd one being a sort of sequel. And oh man does the 3rd movie impress.

So yeah, I love this series. Kyouko best girl.” 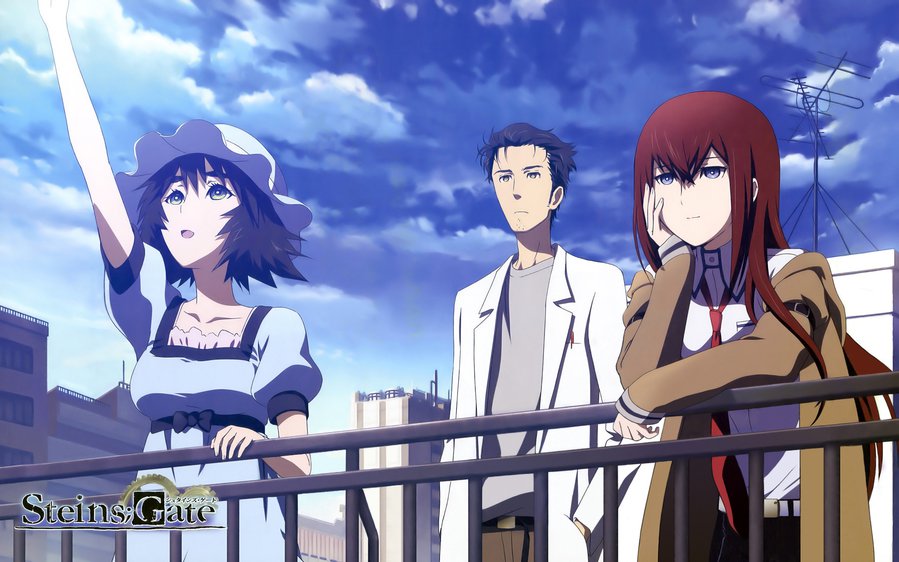 “This series is just wonderful. It has a great duo of main characters, who in tandem create many comedic, interesting, meaningful and emotional scenes. The story is really well-constructed and it’s satisfying as hell when you see everything come together and make sense. It does a pretty good job creating and adhering to its own rules. It has some very beautiful tracks in its soundtrack, like Gate of Steiner or Suzuha - plus the opening song is amazing.

The conflict and characters are presented in such a way that it’s really easy to get invested in it, which is also one of the main reasons why I like this show so much. The total shift in tone in the series’ second half hits you hard, and the last five episodes in particular are just so damn good. All in all it’s one of my absolute favorites and one I’d recommend just about anyone to check out. It’s just such a lovable series.” 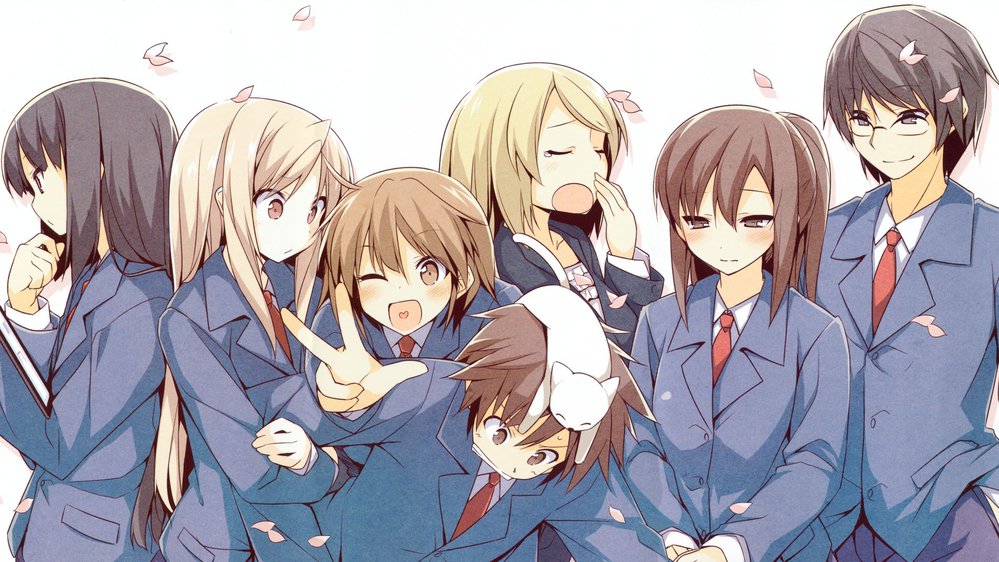 “Kanda Sorata lives in Sakurasou, a dorm for problem students. One day, Mashiro Shiina, a world renowned amazing artist, moves in to the dorm. But she cannot take care of herself, so Sorata has to look after her, and is put on Mashiro Duty.

Sakurasou is a school romantic comedy that you wouldn’t expect to be amazing, but then it is. As someone aptly said in a review I saw, when you break down Sakurasou into the basic bits, it doesn’t sound like it would be very good. But then you take all of the bits and put them together, and it makes something great. It has fantastic directing in everything, so much that just mere scene transitions were wowing and impressing me. All of the characters are very lovable, and I became very attached to the show very quickly. It has great art, everything is very vibrant and it really works well with the themes and story. I definitely didn’t give it justice in these thoughts, so check it out for yourself! Definitely one of the kings in this bloated genre of anime.” 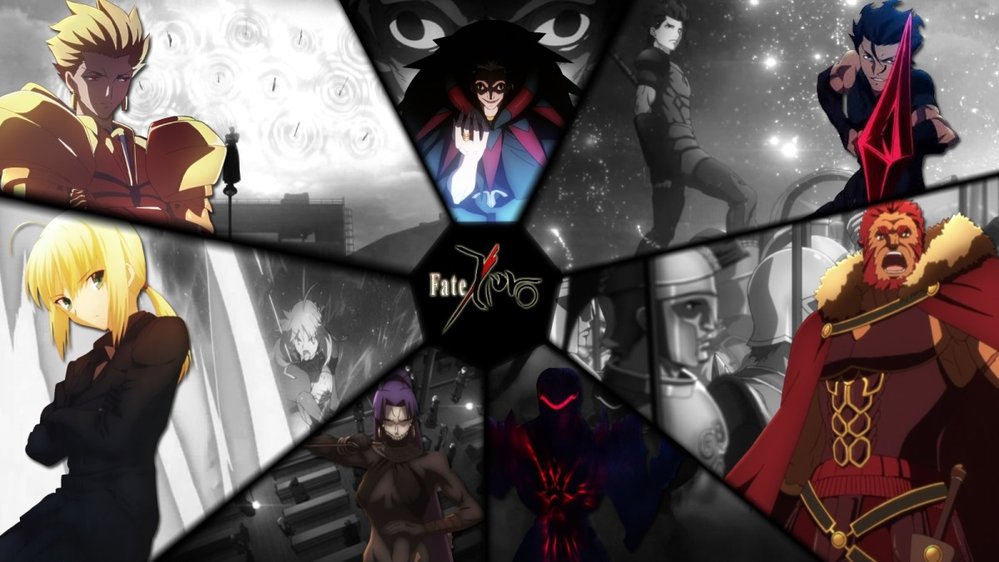 “While it is debated whether one shouldn’t watch this show until after he or she has read or watched Fate/Stay Night, this was my introduction to the Fate series, and I don’t regret it.

In case you’ve been living under a rock, Fate/Zero is the adaptation of the light novel prequels to the visual novel, and tells the tale of the Fourth Holy Grail War: a battle royal to the death between seven magi to obtain a magical entity that will grant any wish. The only catch: each magus, known as a Master, must summon a Heroic Spirit, a powerful figure from history, known as a Servant, to fight for them.

It is a dark story about deception and having to choose the lesser of two wrongs. It does not have a clear protagonist or antagonist, switching perspectives between each of the seven Masters, and you watch as characters betray, suffer, and fall apart. You sit on the edge of your seat, trying to figure out where the loyalties of each Master (and Servant) lie. Oh and there’s a lot of fighting. And murder.

And of course the most attractive part of this show is ufotable’s brilliant animation. Probably the best I’ve ever seen, and it fits Type-Moon’s art style perfectly. I can’t describe it well enough with my words, though. You’ll have to just watch it and experience it for yourself.” 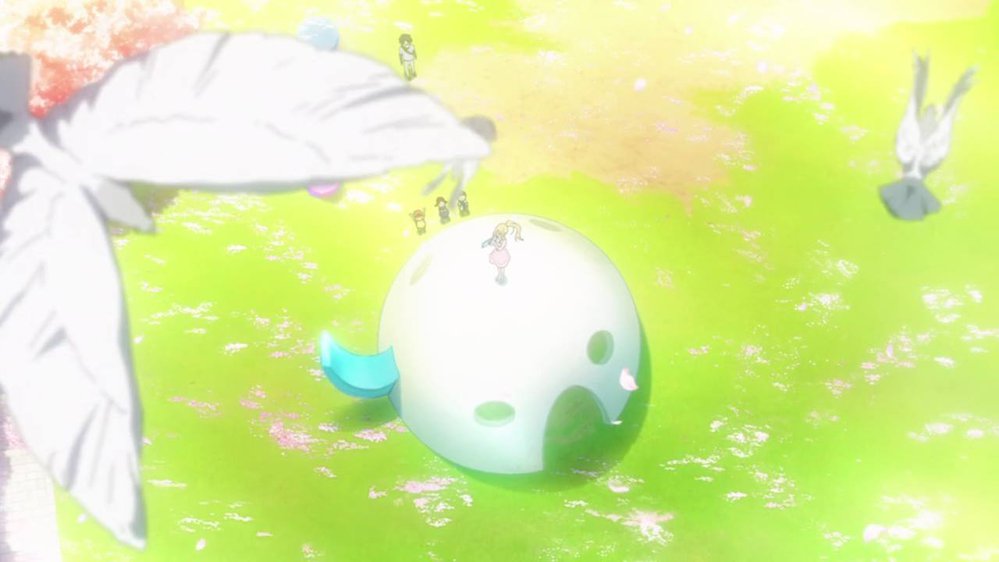 “Why do I love it? One is because I love the way it is written. I love the colorful monologues that the characters start to spur on about; I love the turn-of-events no matter how expected they may be. I love the way that the whole story goes full circle. But the story isn’t the only reason why I love it so much, it’s the way it was animated as well. Specifically, I love how they animated the music. It’s one thing to say “his piano playing is powerful,” it’s another to actually have the piano being played powerfully. Even without the descriptions, you can figure out what kind of emotions are being played during the performances. That also makes it superior to the manga, in a way.” 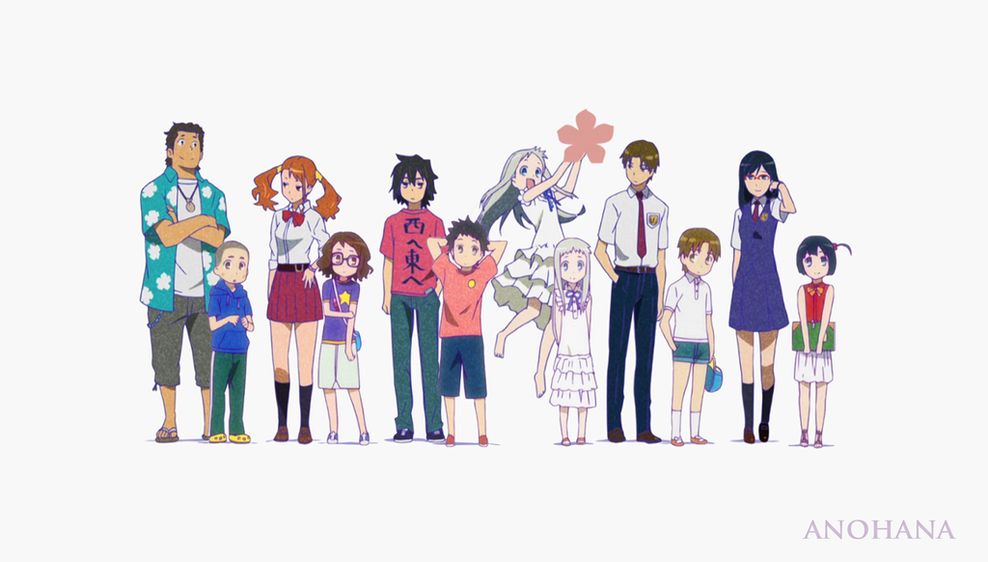 “I honestly didn’t expect to feel for these characters so much in only 11 episodes. This anime is very relatable to me, because most of my childhood friends spread apart and I’m one of the only few who still loves playing old games we used to play instead of stuff like basketball. In AnoHana, you follow Jinta, a once active child turned hikikomori after the death of one of his childhood friends, which split up the group they were in. He encounters this same friend years later, as a sort of “spirit” which only he can see.

It’s art is great, the characters are relatable and the music is wonderful. The use of it’s ED, Secret Base, is used in a way to make you cry, and it works. I loved this anime so much I watched it in a day, and it’s feasible, as it’s only 11 episodes. Which is a sort of feat to make someone feel that way in so few episodes.

This felt like a mess but you get the picture. Watch this whenever you have the chance, you won’t (or might) regret it.”

Wait… What do you mean Gurren Lagann didn’t make the top 11?!