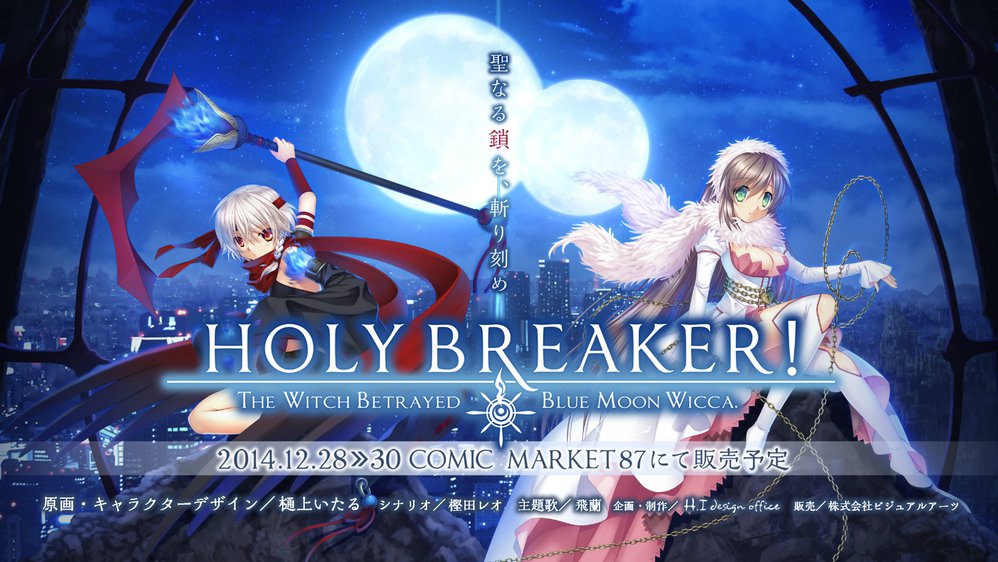 In lieu of no recent Angel Beats! news, an unexpected announcement has cropped up. A new visual novel is being produced by two of Key’s central staff, but not as a part of Key’s brand. The game is titled Holy Breaker! -The Witch Betrayed Blue Moon Wicca.-, and is being produced with Key’s famed artist Itaru Hinoue as the project’s lead and character designer, and Leo Kashida, known for his work on Tomoyo After and Mio’s route of Little Busters as scenario writer for the project. Joining them is Donmaru handling sound, and Faylan performing the game’s opening.

The game is being produced as a doujin title under the Hitaru Inoue Design Office brand and published by Visual Art’s, to be sold as at the Comic Market 87 event between December 28 and 30. The game will be short in length, and is rated 15+. Here is a rough translation of the story listed on the website:

The world was created by weapons. Kings of myth once wielded these ten legendary weapons to create nations. If one were to acquire all ten weapons, they would wield tremendous destructive power. When two moons float in the sky, the legend will become reality, and the hidden power within the weapons will be awakened. Now, under those two moons, a black witch and white demon-hunter face each other. Tsukumi Izumi, a high school boy who witnessed their battle, is eventually pulled into their conflict. It is an action packed story depicting a modern Japan, and the battle of two girls under two moons.

The story is rooted in Wiccan mythology. Our first heroine, Minase Tenma, is an airheaded black witch who wields the legendary sickle and is deadly in battle. The second heroine, Haruka Abeno, is a refined demon-hunter who wields the legendary chain, and seeks to claim all ten legendary weapons for herself. And our protagonist, Tsukumi Izumi, is a second-year highschool boy with a younger sister named Tomoko who is hospitalized, and he is constantly worrying about her.

The game seems to be a brief, one-off excursion for Itaru and Leo from their work with Key, rather than a permanent departure from the company. If you’re a fan of Leo Kashida’s writing or Itaru Hinoue’s art, then it may definitely be worth keeping an eye on this. What do you think? Are you eager to invest in a new short story from some of Key’s staff?