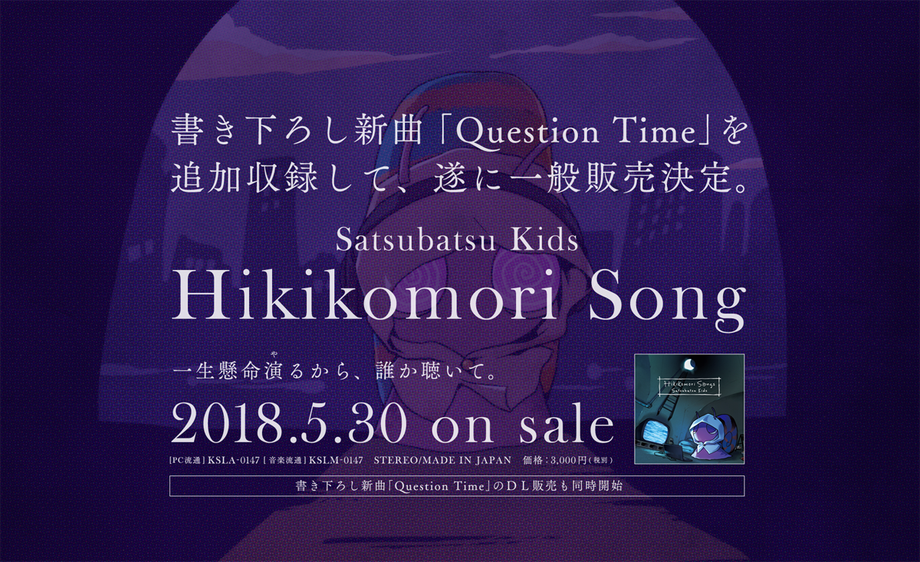 Indeed, the Satsubatsu Kids album initially released at Comiket 93 will get a general, physical release on May 30 and with an extra track named Question Time. Hikikomori Songs is an album of 12(+1) tracks featuring composition and lyrics by Maeda Jun, vocals and arrangement by Hyon, as well as illustrations by Juri Misaki. The full album will sell at 3000 yen, and for people who already bought the C93 version Question Time will also be available as a download for 150 yen.

This album is a lot of Maeda just doing what he wants. He’s emphasized several times in the promotion that it’s not an album “made to sell.” It can really click with people depending on their mindset, but it was aimed at a more specific group rather than the general public. If you’re wondering why I sound so negative, it’s because this album is far darker than anything else Maeda’s done. Of course, that doesn’t even matter to people who don’t look into the lyrics, so I don’t know; I’m just trying to be fair here. Like, I think Hyon is an amazing singer and would love for Satsubatsu to cover more old Key songs, so on that front please buy this album.

You can listen to a crossfade of the album below!