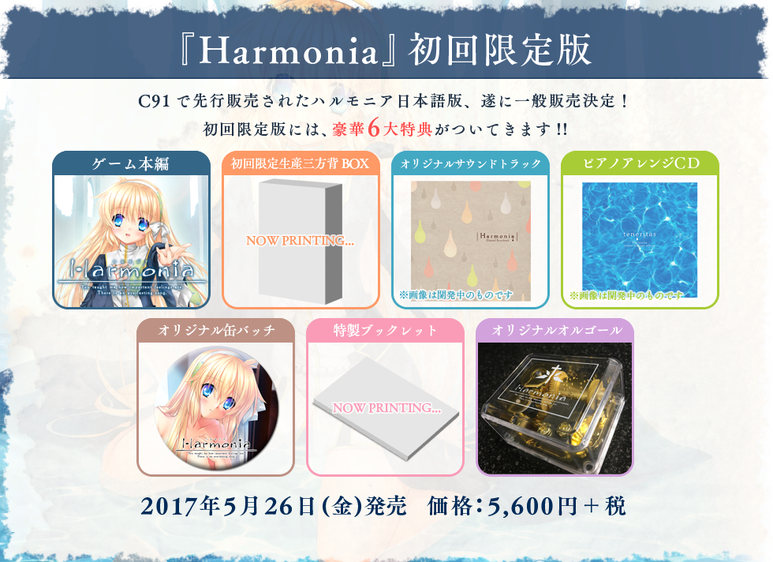 After a fairly successful limited release of Harmonia in Japan at Comiket 91, Key has officially announced a commercial release of Harmonia! This means that Harmonia is going to be sold in stores all around Japan (and import stores to the rest of the world, too), and people who weren’t able to attend C91 can grab themselves a copy of Key’s newest Kinetic Novel. And while most of us international fans already have it on Steam, the Japanese release may just spark your interest.

Harmonia will be released as a “First Press Limited Release” edition on May 26, 2017, for 5600 yen (plus tax, if you buy it in Japan). As with all first press limited releases, it’ll come with a generous share of goods (as seen in the header above), namely
* First press three-sided box
* Harmonia Original Soundtrack
* Harmonia Piano Arrange “teneritas”
* Shiona Can Badge/Button Pin
* Limited Edition Booklet (with illustrations and a short story)
* Harmonia Original Music Box
* And, of course, the game CD

While we have our usual share of limited edition goodies, the music box that they’re offering is especially interesting; and I’m sure anybody who’s read Harmonia knows exactly what the significance of that Music Box is.

Also, in a fairly surprising turn-of-events, Key has also decided a “No Game Included” version of the first press limited release, up for grabs for 4200 yen (plus tax) which includes everything above except the game CD. This was apparently designed for the customers who already picked up Harmonia in C91, but don’t want to spend extra for another copy of the game. Thankfully, they’ve designed the three-sided box to fit the C91 release of Harmonia perfectly. This is also especially of interest for the rest of us who have the game on Steam, but would like some sort of “physical” release of the game. Because hey, if you’re anything like me, you probably won’t even open up the CD of the game!

Pretty interesting release Key has for Harmonia, and it’s nice to know they’ve kept the options open for all of their customers. The game itself hasn’t yet popped up on our usual sources, but if you guys know where you can pick it up (or import it), let us know in the discussion!