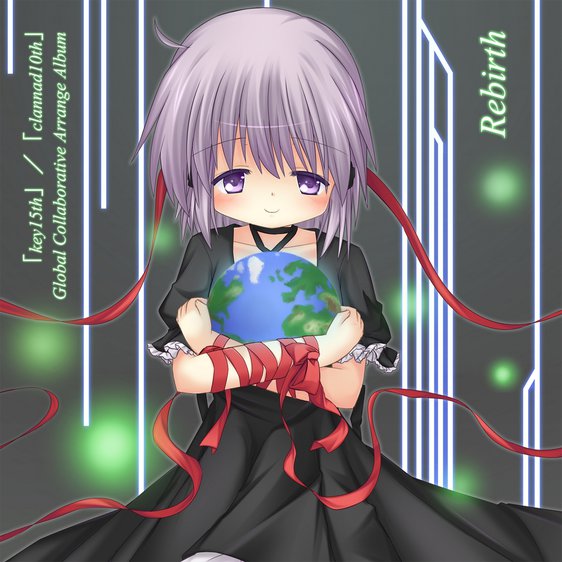 After a bit of a wait, and with many people wondering what became of it, Global Collaborative Arrange Album Rebirth has been published online! You can download it free of charge right now.

A bit of history, and some personal thoughts. First I heard of this album’s existence was as a reward for Steven Schoenwald’s (aka Clannad_Man) controversial Key documentary kickstarter. The project was hastily abandoned, and Steven has kinda dropped off the radar after the affair. My personal opinion about the whole fiasco is that Steven made some pretty terrible decisions, and got what was coming to him. That said, a small part of me empathises with him, as I don’t think anyone could doubt that his passion for Key was genuine.

So, it may turn some people away to hear that Steven himself is the organiser of this album. Here’s my request for all of you: put your personal feelings for Steven aside. What happened happened, but I’d like for people to treat this album as it’s own individual thing, and not reject it because it has Steven’s name on it.

The album is a collection of fan-arrangements of different Key works to celebrate both the 15th Anniversary of Key and the 10th Anniversary of Clannad. It brings together the musical talents of Key fans from all across the world; some you may have heard of before. I encourage you all to give it a listen. This album was most certainly a labour of love. It covers a diverse range of genres and styles, and while not all of the songs on the album will appeal to you, I encourage you to give it a good listen, because there’s some great arrangements in there.

I give my sincere thanks to all the people who worked on the album, even Steven himself. If you like what you hear, I invite you to check out the artist’s other works. I’ve done the hard work for you and gone looking and found links to most of the artists’ webpages, which I’ve provided below. And if any of you listed here find us here and want to join our community of Key fans, we’d be happy to have you!

If you have any corrections I need to make to that list, let me know.

12.A Christmas Dango (Instrumental)
Kwok He Chu
Based off of ‘Chiisana Tenohira‘ by Jun Maeda