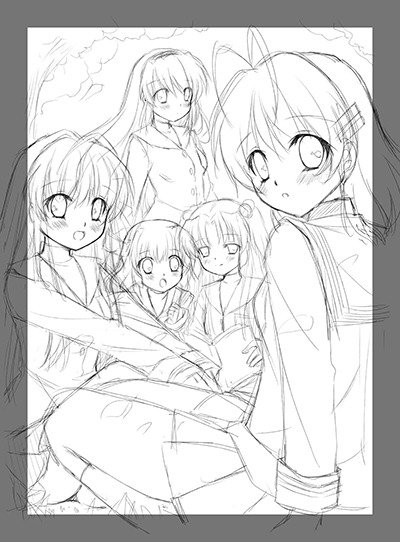 A quick update on the status of the CLANNAD Official English Release Kickstarter. The total pledged is currently at $263,918 at the time of writing with 39 days to go. We’re not even halfway yet, we can still make the stretch goals of $320k and $380k! Firstly, it’s been decided that the final resolution of both the full game and the side-stories will be 1280x960 rather than the previously suggested 1280x720. They’ve unfortunately been unable to promise any ports to platforms other than Windows, but there are alternatives to run the game on Mac or Linux if you’re worried at all. Sekai Project have so far been unable to update the front page of the Kickstarter with the stretch goals due to “waiting on assets” from VisualArt’s, so hopefully the Kickstarter page will be updated to reflect the changes soon.

In a recent update, Sekai Project have announced the artists who will be working on the all-new CLANNAD manga anthology. They’ll be employing the talents of (based) ZEN, and Misaki Juri. And lastly, they’ve been able to provide us with a preview of the tapestry that will be provided as a reward to the $115 tier, or as a $30 add-on (pictured above). The tapestry features all-new art produced by Itaru Hinoue for the CLANNAD Kickstarter. What do you think? Will be you be pledging for it? I know I will be!