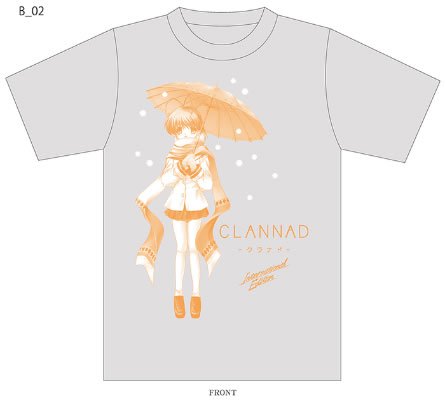 Sekai Project have posted an update to the CLANNAD Official English Release Kickstarter, giving us a preview of the T-shirt which will be provided to backers who pledged $85, $115, and $175+. They mentioned that if you want to add a T-shirt as an addon to your rewards, just add $25 to your pledge.

Also, a reminder that they will be unlocking 5 more $1,000 tier slots at 11am PST tomorrow. If you’ve been looking at getting your game and tapestry autographed by Itaru Hinoue, now is your best chance!

The total amount pledged for the game as of writing is $334k. Under $50k and 15 days left to reach the final stretch goal! Dig deep guys, and continue spreading the word!

UPDATE: An update has been posted to the Kickstarter detailing a change to the T-shirt design in response to backer feedback, and the final cost of international shipping for addons. The text on the T-shirt has been changed from ‘International Edition’ to ‘Kickstarter Backer’. As for addons, the cost of international shipping will be $5 for every addon except the physical box of CLANNAD, which is $10. A breakdown of how these costs might be calculated is shown at the bottom of the post.

Which do you prefer? ‘International Edition’ or ‘Kickstarter Backer’?