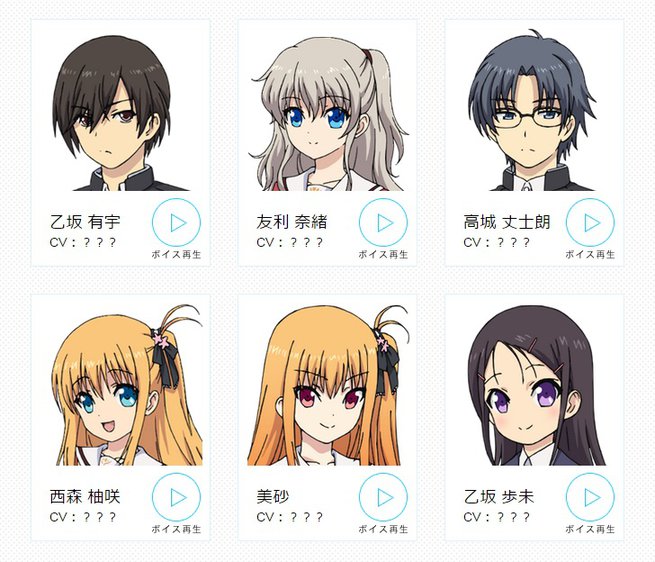 UPDATE: The voice cast has been officially unveiled!

The voices of the main cast are as follows.

Ayana Sakura is notable for her roles as Anzi Kiriyama in Kokoro Connect, Natsumi Koshigaya in Non Non Biyori, and Mika Shimotsuki in Psycho-Pass. Kouki Uchiyama has performed as Seiya Kanie in Amagi Brilliant Park, Raku Ichijou in Nisekoi, and Soul Evans in Soul Eater. Takahiro Mizushima is Takamatsu from Angel Beats!… Enough said. Maaya Uchida has performed as Rikka Takanashi in Chuunibyou demo Koi ga Shitai!, Rea Sanka in Sankarea, and Frenda Seivelun in Toaru Kagaku no Railgun S. Momo Asakura is a relatively new talent, voicing Sumi Otokawa in Sakura Trick and Rin Kazari in Witch Craft Works. You can listen to samples of each of the characters’ voices here.

Don’t forget that Yusa Nishimori is the lead singer of the in-show band “How-Low-Hello”, and to compliment that, Maaya Uchida will be personally providing vocals for her performances! No more LiSA replacing Eri Kitamura as was the case with Angel Beats!, this time the voice actor doubles as the singer!

If you would like to learn more about Charlotte, check out our information page here!

What do you think of the selection of voice actors? Let us know in the discussion below!

Credit to @Rabla for originally posting this news on the forum.