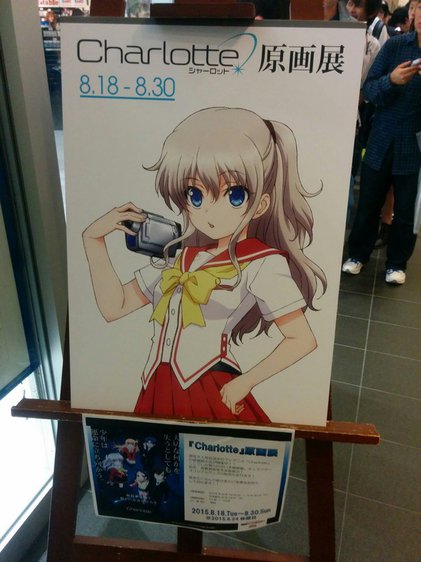 Hi everybody! Resident Kazamatsuri newswriter Pepe, here to give you a special coverage on a special Charlotte exhibit held in Akihabara during the month of August 2015! More information about it can be found in the article we published some time ago. I was fortunate enough to be able to attend on the last day of the exhibit. So come on, let me show you around~ 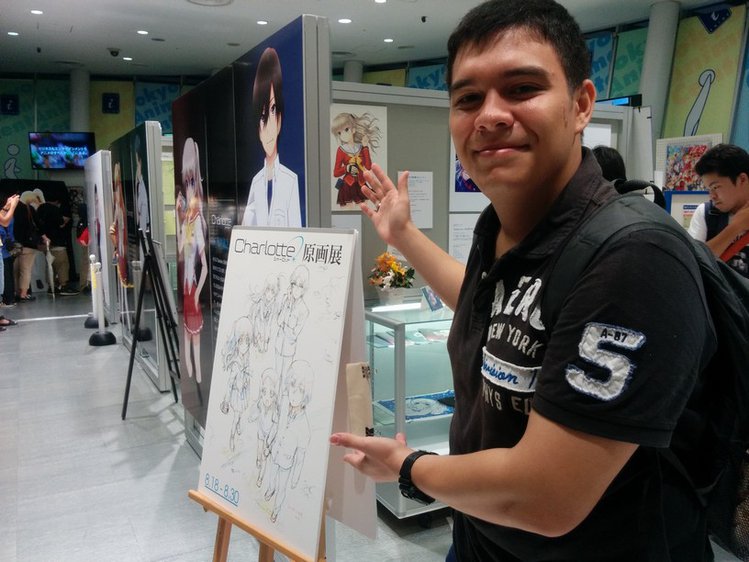 And allow me to be your guide.

I arrived at the Tokyo Anime Center and met up with some other Kazamatsuri members. Shoutout to Kaze and RyuuTamotsu! Now, since this was the last day, the line was pretty long! It took us 30 minutes just to get in there. The staff were even instructing people not to take too long taking pictures. 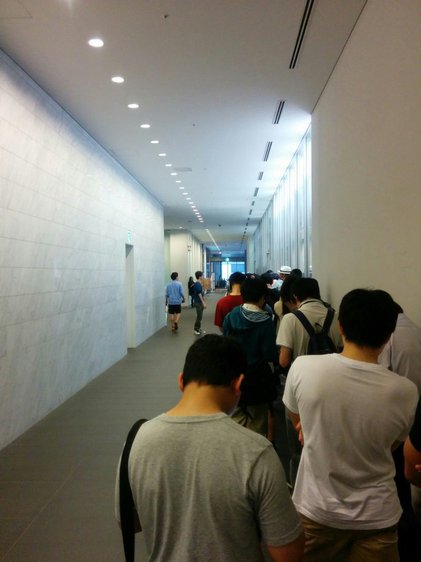 Finally we were able to get in, but we still had to wait a bit just to see each part of the exhibit. That’s how crowded it was! The entrance itself greeted us with a nice piece of the draft artwork of all the main characters from Charlotte. 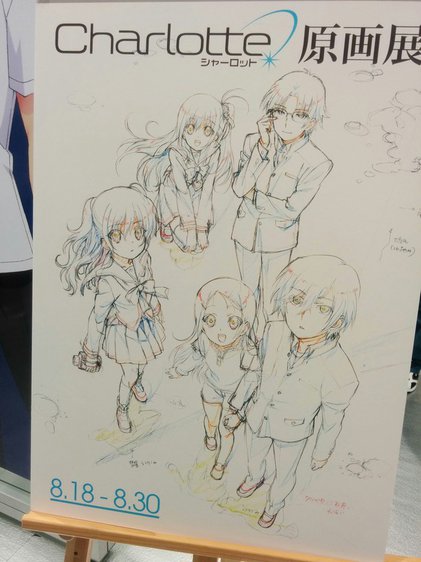 I’m sure we’re all familiar with this piece of art.

Right beside that were huge artwork of the Charlotte characters adorning the walls of the exhibit. They were also advertising the upcoming How-Low-Hello and ZHIEND singles by displaying their cover art for all to see. 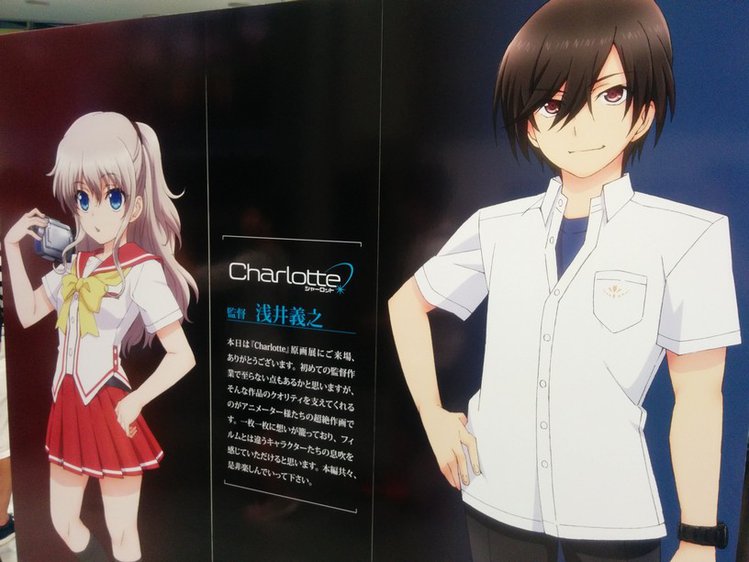 The protags of the series, looking swag as always. 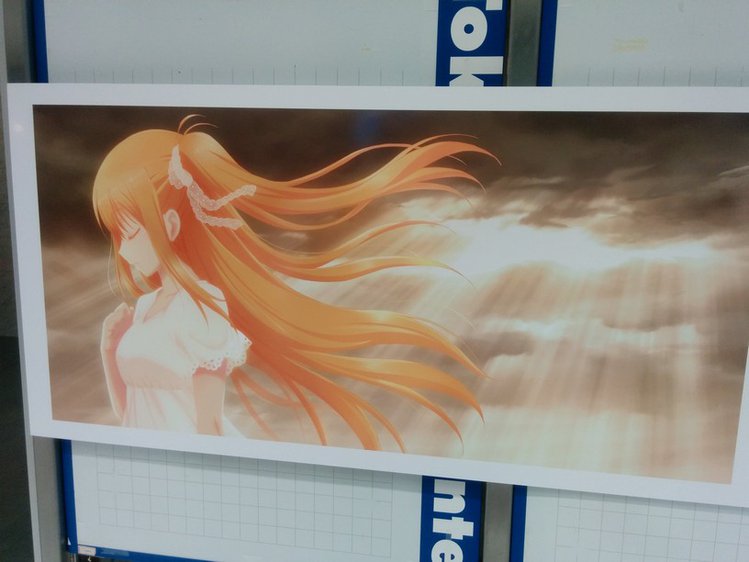 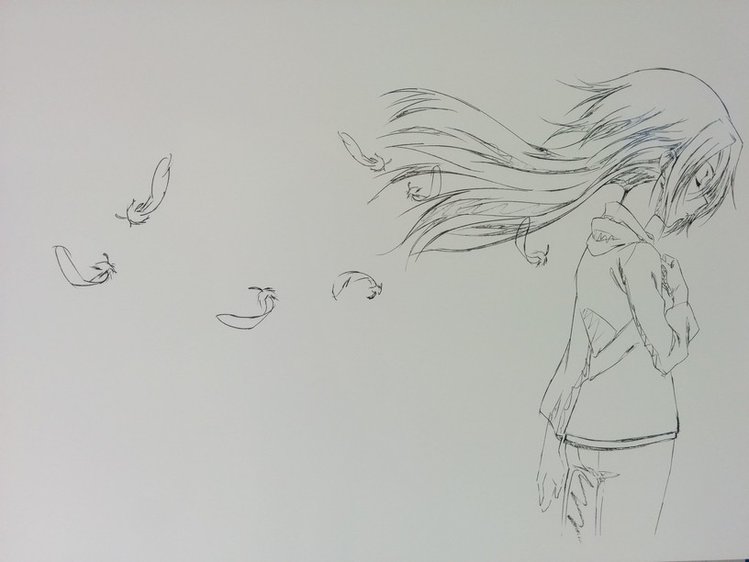 Can’t have Key without feathers!

Also by the entrance was a huge, multi-screen television looping numerous Charlotte previews from both How-Low-Hello and ZHIEND that we had seen earlier from YouTube! 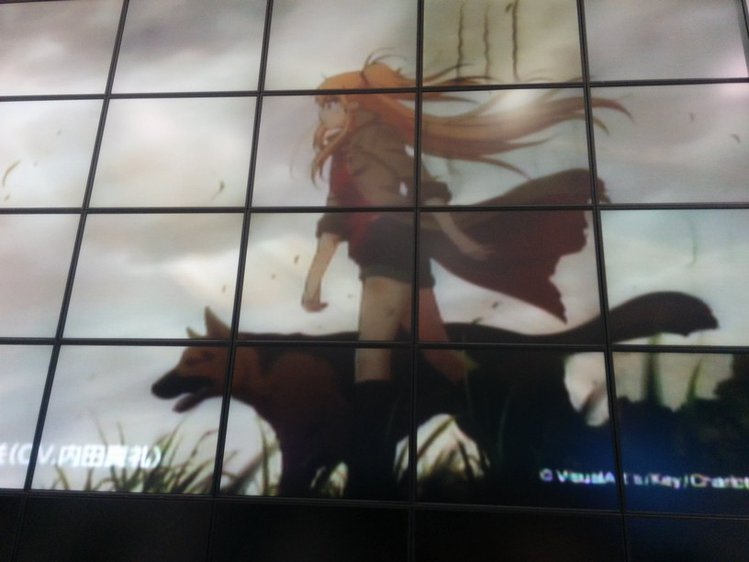 A short ways in, they had cardboard cutouts of all the main Charlotte characters as well, and these were 1:1 ratio, meaning you could compare your own height to the height of the other characters! They seemed pretty short, though, compared to myself… 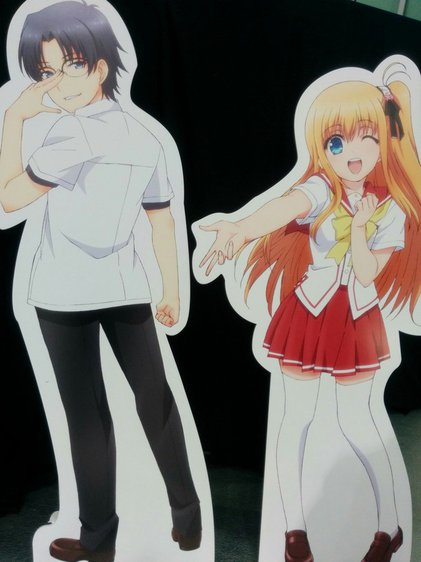 After entering the exhibit, we checked out each lane inside. The first lane of the exhibit showcased the key visuals of Charlotte, which I know many are familiar with, along with a few rough sketches and storyboards of the Opening sequence of the anime series. 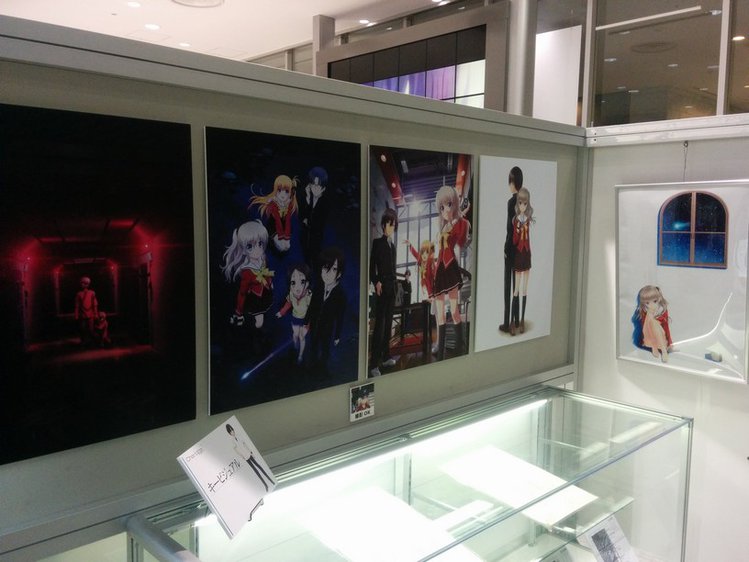 They even have the very first Key visual! I haven’t seen that one in a long time. 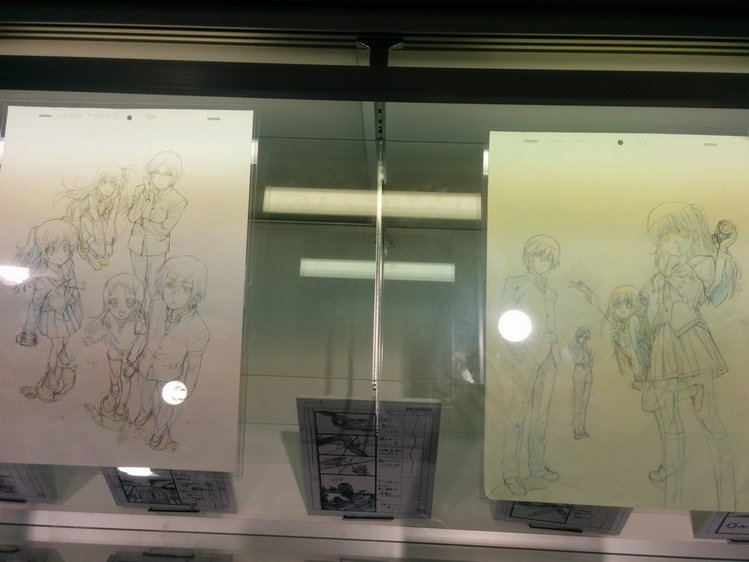 It’s interesting how they use all these colors in the rough sketches. 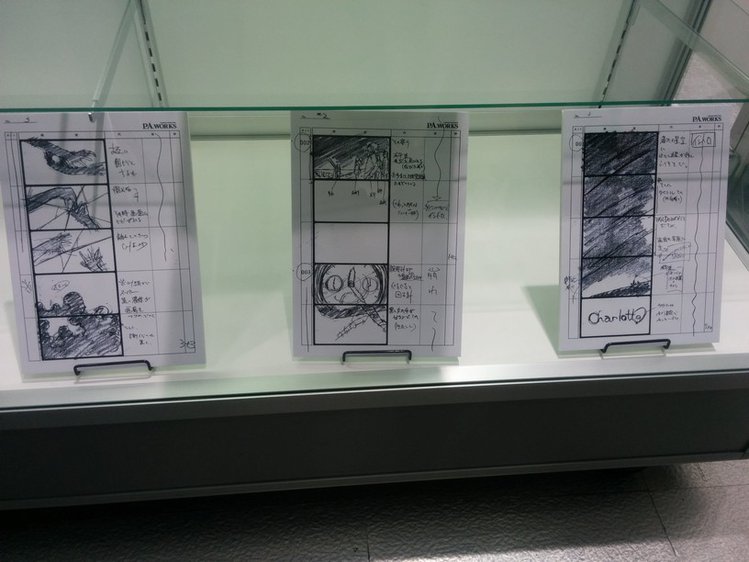 Onto the second lane, we had some more various rough sketches, storyboards, character designs, and even a special display featuring the Otosaka special Omurice! Looks “yummy"~ 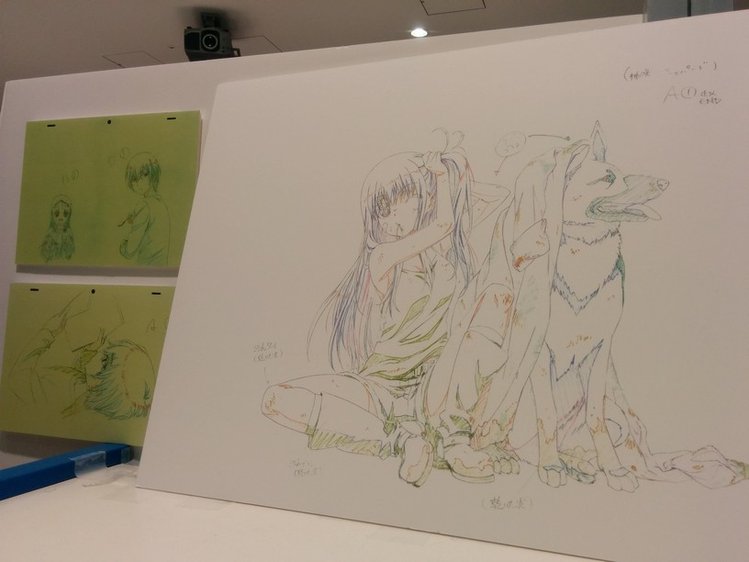 The dog is a pretty important part of the series, after all!

It never hit me just how many characters the staff had to design. 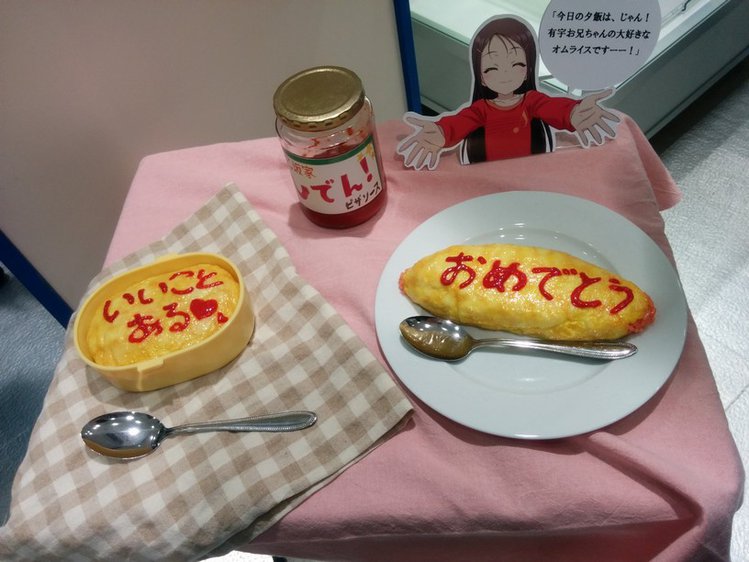 The third lane focused more on rough and final sketches of the numerous scenes that we have seen in the anime. Many of you may remember these if you’ve been following up with Charlotte. 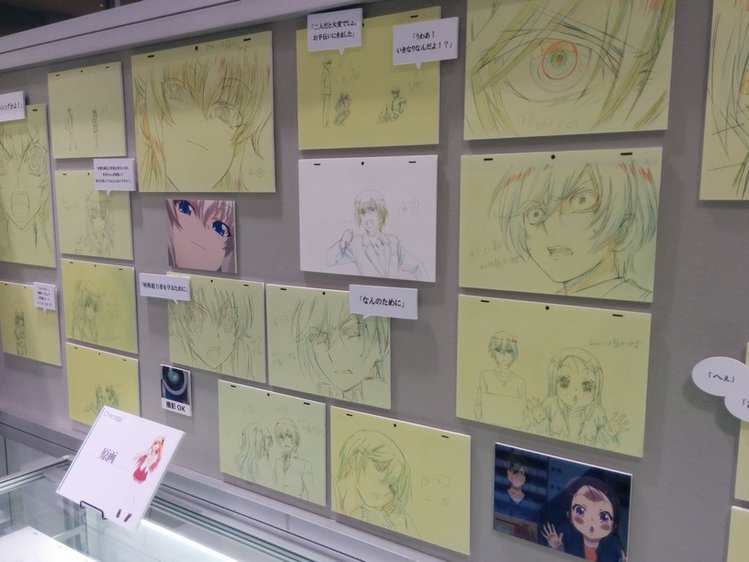 I also wonder how many rough drafts the team had to go through to publish their final work. 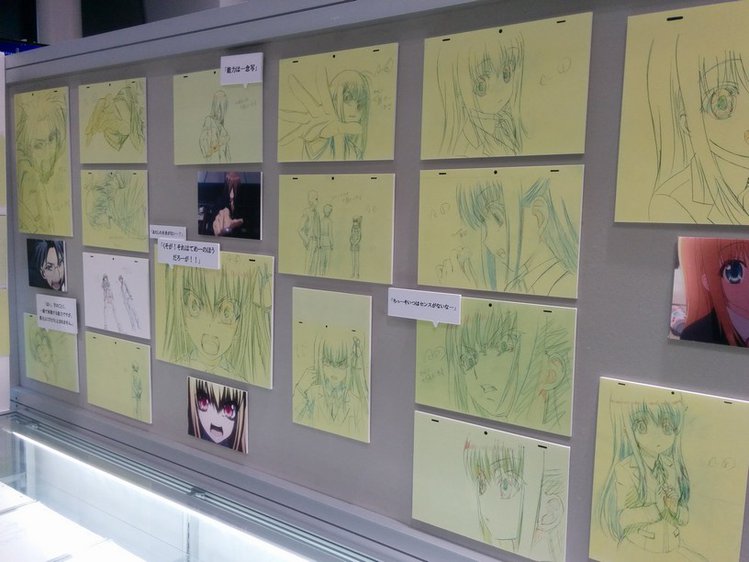 Also featured were the actual scripts and titlecards used for each episode in Charlotte. Even the infamous Episode 6 is highlighted in a dark red, probably for emphasis. 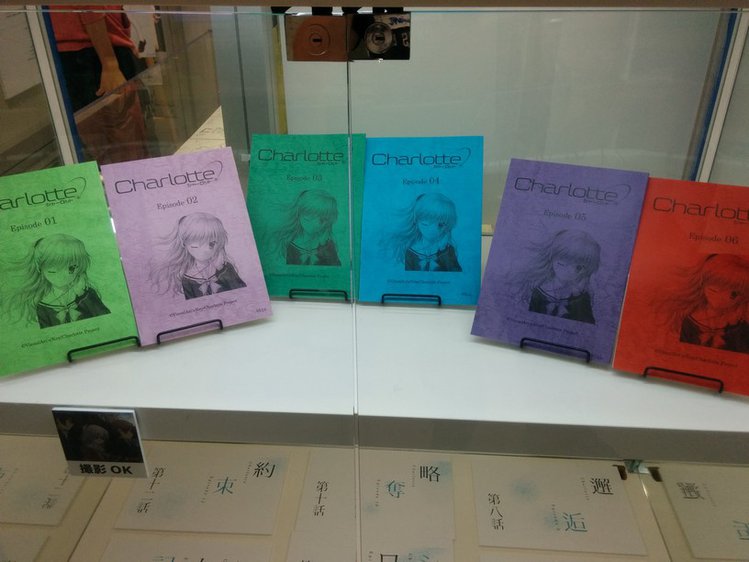 I do wonder if the colors signify anything… 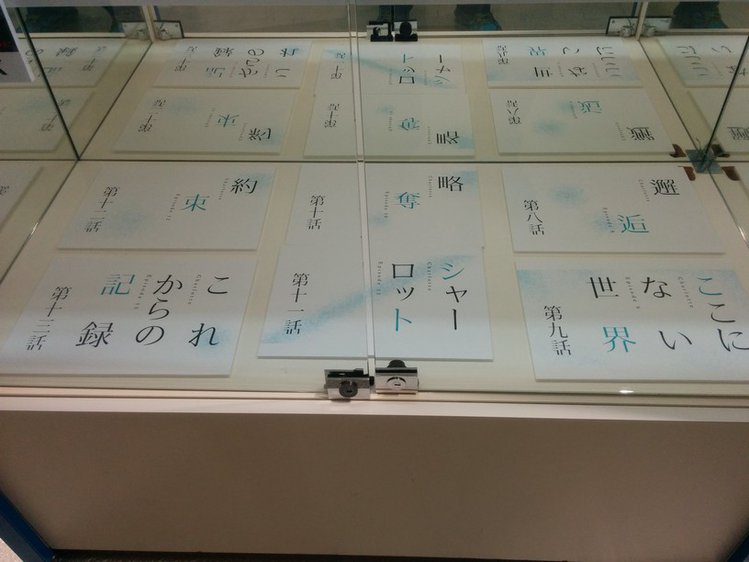 A bit of a spoiler, if you can read it.

Onto the final lane, where they displayed a few promotional materials to be used in upcoming Charlotte merchandise, including the CDs and Blu-rays. And, that’s right, even a genuine Hoshi no Umi uniform, provided by Cospa! 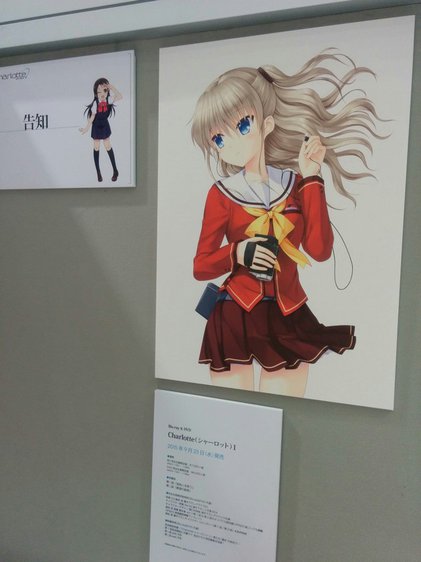 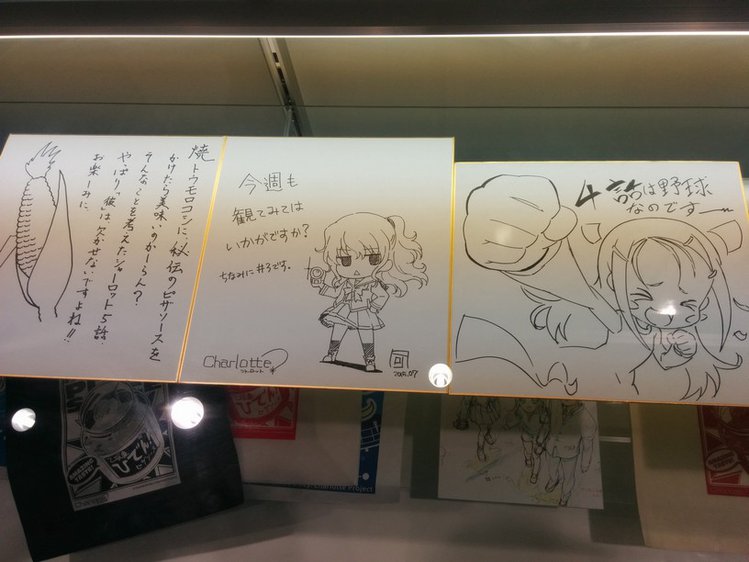 Some congratulatory messages, which you may have seen on Twitter. 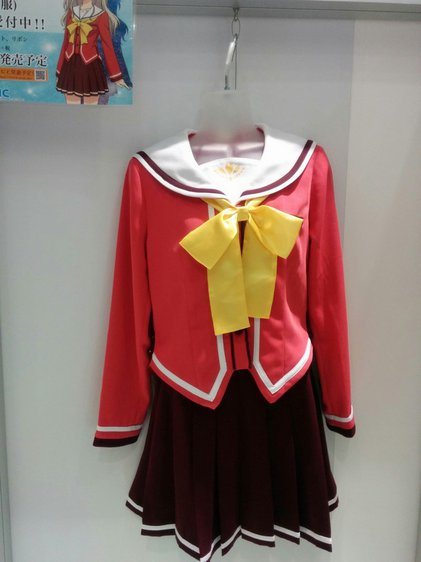 This would be perfect for anyone planning to cosplay the Charlotte characters.

And finally, a bit off the side from the actual exhibit was the merchandise corner, where they were selling the first releases of Charlotte merchandise! ….or so that would be the case, if they weren’t sold out by then. Well, it was the last day after all, so I shouldn’t have gotten my hopes up. 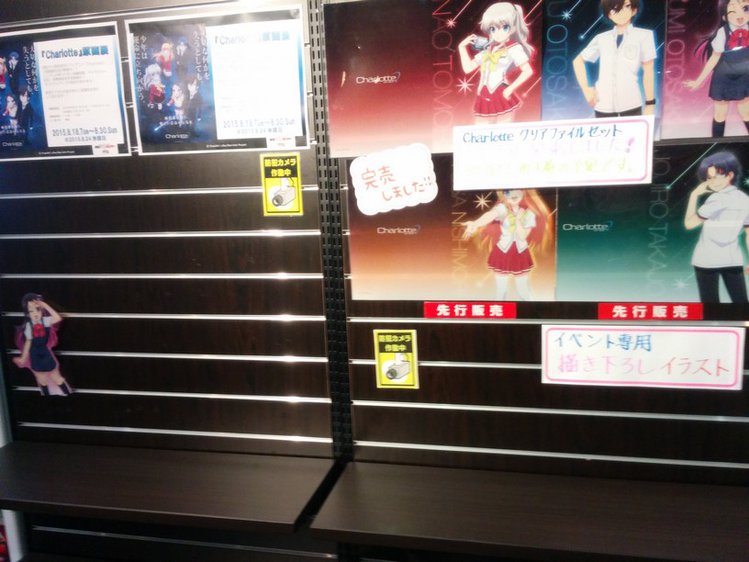 Absolutely nothing left on this aisle 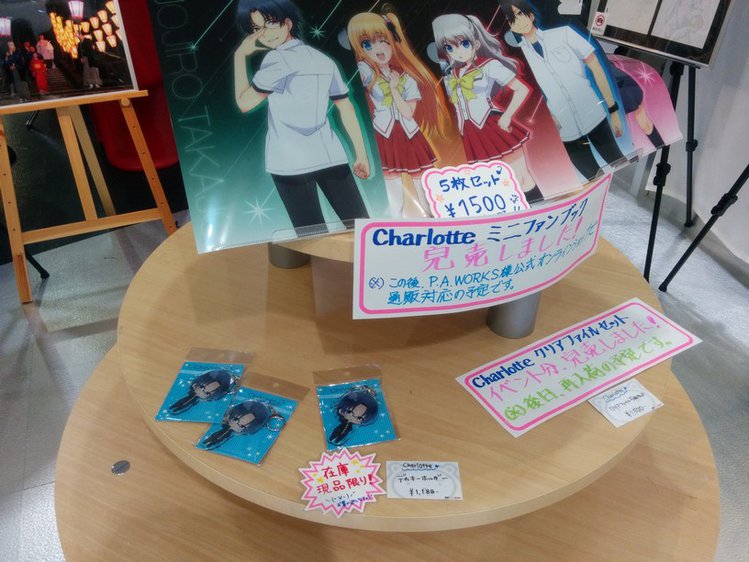 Even here, the only things remaining are some Joujirou keychains. No love for Joujirou, it seems.

Despite not being able to buy any merchandise, I still left there feeling pretty happy that I got to see an exhibit such as this. It really gave me an insight as to how the Charlotte anime went under production, and I would say I was able to appreciate the creation of the anime after it.

I took a lot more images, though! I didn’t want to make this article filled with too much photos, so you can see a complete collection of all the photos I took in the embedded album down below. However, be warned! The photos below may contain spoilers from the Charlotte anime all the way up to Episode 7, so if you haven’t watched those yet, you’d best avert your gaze until you do so!

Well, that’s all I have for the Charlotte exhibit. I hope you guys were able to enjoy looking at these pictures as much as I enjoyed taking them! Hope you stay tuned for our next special coverage: the Key Summer Sale!