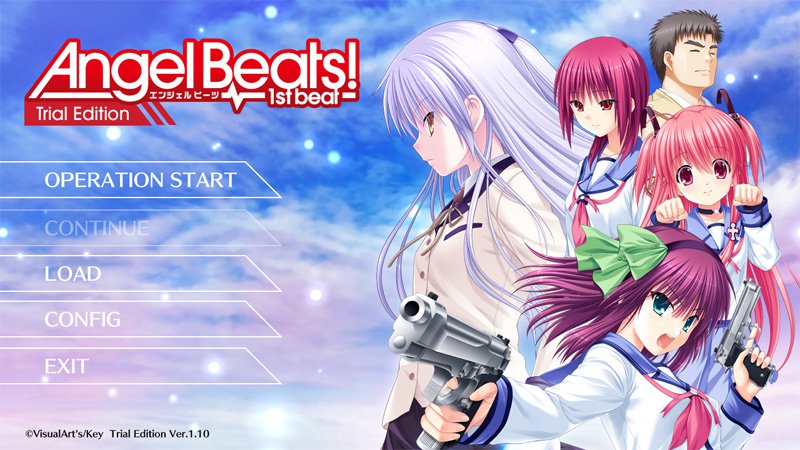 As we reported some time ago, the trial edition of Angel Beats! -1st beat- was previously released at Character1 in Japan with a CD format. However, those who were not able to obtain a copy of this CD now have a chance to experience the trial firsthand!

It’s worth noting that Key have confirmed on their official twitter that this is version 1.1 of the trial, while the CD released at Character1 was version 1.0. What does that mean? That means that some choices, which were blocked in version 1.0, are now selectable, giving players of version 1.1 even more content to explore!

Keep in mind that the game for some very strange reason has a region lock that will try to prevent you from playing on a non-Japanese PC. To overcome this, you can use the AlphaROMdiE tool to create a shortcut to the game which ignores the lock. This tool works on all new Key games since Rewrite, so you might wanna keep it on hand if you plan on playing something like HOLY BREAKER! or Harmonia in the near future.

Or if those mirrors don’t work, you can grab it from community member @ArdWar’s torrent:
http://www.nyaa.se/?page=view&tid=690796

Can’t read Japanese? One option you might want to consider trying machine translation software like Visual Novel Reader, which grabs translations from sources like Bing and puts them into the game in real time. It’s not 100% accurate but it can help you get the gist of what’s going on; you might be surprised by just how helpful they can be sometimes. Aspirety himself has read through the first two days of the trial using VNR live on stream, and you can watch the recording here! If you’re interested in helping produce an English translation for the game, you can hit up the Translation Workshop and say hi! No full patch has been promised yet, but the community members have made surprising progress in establishing the foundations for an English translation of the game by tweaking around with some tools. So if you’re someone who knows their way around translation and want to work toward an English translation patch, that’s the first place you should be looking.

And of course, don’t forget to let us know what you think of the trial in its Discussion Topic!