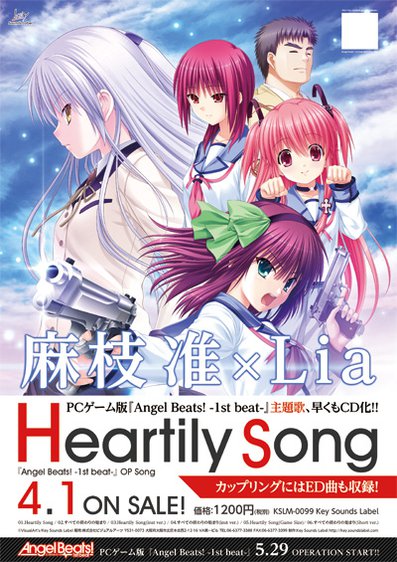 The Angel Beats! -1st beat- OP/ED single ‘Heartily Song’ has been made available for preorder across various retailers, and we have some details about the songs as well! Firstly, the opening theme of the game: ‘Heartily Song’, will be sung by Lia, with lyrics and composition by Jun Maeda. And secondly, we have the reveal of the ED for the game: ‘Subete no owari no hajimari’, which roughly translated means “The Beginning of the End of Everything”. I don’t know about you, but a title like that brings to mind big expectations for me. It will be sung by Suzuyu, who you may recognize as the singer of the Little Busters!: Refrain OP ‘Boys Be Smile’ and Little Busters!: EX anime ED ‘Mezameta Asa ni wa Kimi ga Tonari ni’. Lyrics will be written by Jun Maeda, and composition will be handled by Tomohiro Takeshita. (Thanks to forum member @taiyaki for pointing out these details, and @pepe for the translation.)

The single will be going on sale on the 1st of April 2015. (a date Key fans are no doubt quite familiar with…) If you would like to preorder the single from outside of Japan, amiami is also accepting preorders! Get in quick before they run out! Will you be picking this one up? You can view the tracklist of the single below.

But that’s not all the news Key had to share with us today! Key’s famed character designer Na-Ga has opened a poll on the Key website asking for fans to vote for what they’d like him to illustrate as a bonus for people who preorder the game. The options allow fans to choose any character wearing any attire they want, from the SSS Uniform to the NPC uniform to a Judo outfit to… well, you can view the options for yourself and vote here. You’re allowed to vote once a day, so if you have a character you really want to see illustrated, get a bunch of people toegether and vote every day! Who knows, you might even influence the result. Let us know who you voted for in the discussion below!